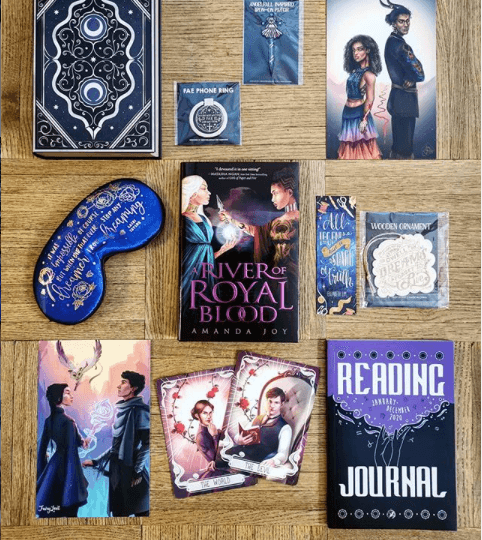 Its day 2 of our Readalong! A lot has already happened and we’ve even already had an assassination attempt so I’m really excited to find out what today is going to bring!

Please be warned, the following will include spoilers for A River of Royal Blood by Amanda Joy Chapters 1-12! Read only if you’ve finished those pages!

If he has bone rings like the rings Raina had, does that mean he has the same magick as Eva? The man turns out to be Baccha, The Hunter from an old myth who Eva thought had died after the Great War, but alas, here he is and he seems to know a lot about Eva.

Oooo so he wasn’t born with magick of marrow and blood but he managed to learn it from Raina! He, however, says he won’t teach her 🙁 But Eva has searched for too long for someone to teach her that she can’t just let him walk away!

The only way he’ll agree to teach her is if they tether their magick to one another…hmm that doesn’t sound like the best plan if you ask me… I think I would side with Falun on this one! We don’t know anything about him, how can we trust him yet?

Ah well! At least she has a teacher now which means there is more hope that she can win and become queen!

Eva arrives back at the palace to find out there is a new guard, but not just any guard, he is a descendant of one of two noble families that were allowed to keep their titles after the khimaer were forced off the throne…do we think he has pure motives since he was sent by Eva’s father or is he planning something?

Eva meets Baccha for her first lesson and learns that everyone imagines their magick coming from somewhere different. Eva sees hers coming from a lake and Baccha a river…where do you think you would imagine your magik coming from? For me it would probably be a calm sea or something like a clear blue sky!

She make him promise to stop her if she tries to hurt someone who doesn’t deserve it…anyone else get a bad feeling about letting him control her?

They’ll experience each other’s emotions?? That would be such an invasion of privacy, especially with someone she’s literally only met once before! They’re gonna become real close, real fast. And someone’s put a barrier on her magick?? Is that why she’s not really been able to harness it? Who would do that though? Her mother? Oh it seems Eva had the same thought? But then is that too easy a guess? Anyone have any other theories?

Eva goes to see her mother who allows her to miss court to spend time learning to use her magick. Do we think it’s possible her father could have put the barrier on her? But why would he want to??

Ahh I’m frustrated not knowing so I can imagine how Eva would be feeling.

On her second lesson, Eva learns that she must use the blood of the person she wishes to harm to help her blood magick. I think it’s so cool that different tattoos help her use her magick in different ways!

Oooo the story about the history of the lands is so interesting! I love when books incorporate stories of the characters history into it! I’m so excited for more of the stories!

Oooo Aketo can read people’s minds! I would honestly love to have that power! It would be so handy!

Eva has such pure intentions for if she became queen and it’s so sad that she doesn’t think it will likely she can! I really hope she manages so she can help all the people in the enclosures! But imagine having to kill your sibling first 🙁

I couldn’t help but laugh when Eva said she’s going to make a list of Aketo’s imperfections until she reaches 1000! She feels sorry for him and his people but is still like nah he’s too perfect for his own good lets find all his imperfections!

Oh no someone is controlling Dagon and trying to kill her!! Is she going to have to kill someone she obviously cares for a lot?

Nooo that’s so sad! And she’s been poisoned! So whoever is trying to kill her must be trusted enough to be able to get close enough to Dagon to poison his sword…

Eva passed out for 3 days and in that time, rumours circulated that she had died! And we find out that a sorceryn laid a compulsion on Dagon which is why he attacked her.

Eva tells Mirabel what she knows about the bind on her magick but Mirabel seems convinced her father wasn’t the one to put it on her…or that he did but for a good reason?

Mirabel cares for Eva so much and I really love their relationship!

Eva decides she must see her father straight away to get to the bottom of this!

Yay we’re off on an adventure!

Does anyone have any solid theories on what is going to happen? Who do you think put the bind on Eva’s magick and is it the same person that is trying to kill her!

See you tomorrow to see if we can find out!

10 thoughts on “A River of Royal Blood Readalong: Day 2”