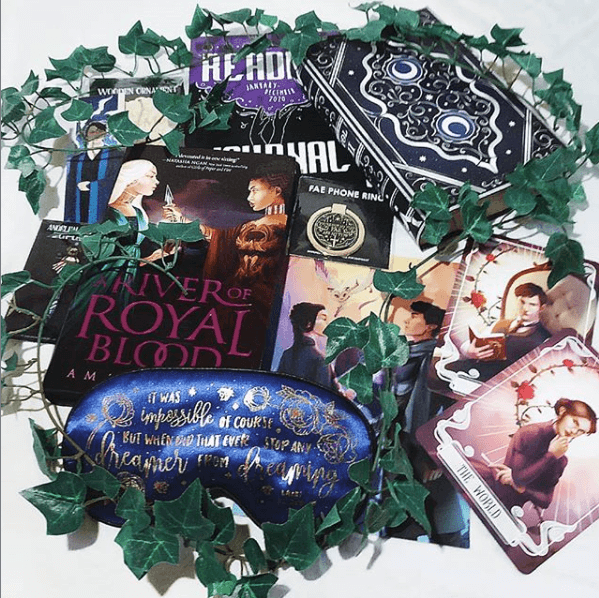 It’s day 3 of our readalong! So much happens in todays section and I can’t wait to talk about it with you all!

With that said, lets dive in to today chapters! Today we’re reading Chapters 13-19!

Please be warned, the following will include spoilers for A River of Royal Blood by Amanda Joy Chapters 1-19! Read only if you’ve finished those pages!

Ahh Eva took Baccha to court with her! That’s going to cause quite the stir!

The tradition of touching each other’s cheeks in a way of greeting is such an interesting idea! It’s such an intimate thing and must be difficult for them to do when they have such an icy relationship.

It seems that some people were quick in wanting to name Isadore true heir with just the rumours that Eva was dead!

The way the Queen talks about things happening in the north makes me think that she knows something we don’t…is she trying to keep Eva’s father away for some reason?

The queen agrees to allow Eva on the trip to see he father and gives her 15 soldiers from her own guard to accompany her.

It’s mad how easy it is for the queen to get under everyone’s skin and manipulate them! Even managing to do so with Baccha.

Oooo Baccha pretty much just said he thinks Eva will be queen which won’t go down well in a group of people who favour Isa and it definitely got under Isa’s skin!

And Eva accused Isa of hiring the assassin!! It sounds like they were so close as children and I’m so sad that they’re now pitted against each other.

So when Isadore first found out they would have to fight to the death, she tried to force Eva to use her magick but she couldn’t! Oh no! And Eva got blamed for it even though it wasn’t her fault!

I can’t believe the Queen told her about the Rival Heirs in that way, as if it didn’t matter that one of them was going to die!  It sounded so cruel!

And that was when Eva decided to run away.

“I wanted to knock his gorgeous teeth in.” I love how much she can’t help but comment on Aketo’s appearance! She doesn’t want to like him but finds him too attractive!

And now she’s challenged him to a sparring contest! This should be fun!

Being able to draw on her magick while fighting sounds so complicated and difficult as she first has to make her opponent bleed and then get that blood to the tattoo she wishes to use to amplify her magick! Not an easy fix! But she does seem to be getting better!

The old way of choosing a Queen sounds much more interesting!

The joining of two empires and coming to a compromise would be much more effective, I think, than basically killing a whole race!

Oh dear, she has to spar with Aketo now. They’ve only just started and she’s being humiliated. Instead of just fighting, however, Aketo teaches her the khimaer death dance, their way of fighting that makes them so good. Soon enough she can hear the music he speaks of and can anticipate his next moves…but he still manages to beat her.

Hmm where did Baccha go? To meet someone maybe? But who!

Omggg Aketo could sense her admiring him!!! I would’ve died on the spot if that was me, I’d be so embarrassed! Aww he made it slightly less awkward though by saying he admired her too.

Ooo they’re moving on to marrow magick! And Baccha said he had left to seek out a quarry where they could train but I’m not sure I trust him!

He actually forgot she can’t see at night ? He seemed so shocked about it and I found it so funny! But it doesn’t matter too much as he can give her some of his own night vision! And now they’re running on wind! How many powers does Baccha possess?

Cutting off and claiming the horns of the antelope made the tattoos linked to her marrow magick glow! I wonder what these ones will help her do?!?

At least these bones will last the rest of her life so she won’t have to go through that again!

So it was the kindness of the Queen, her giving the humans a small amount of magick, that led the humans to believe they should take over and rule.

It’s so interesting to hear about Aketo’s life at home and what it was like to grow up with natural magick.

Omg what! Who’s screaming and why??

Oh nooo they’re being attacked!! But this gives Eva a good excuse to practice her magick in a real fight!

Luckily Baccha could heal both Aketo and Eva but why did the men from Dracol attack? Is it the assassin again or is someone else against them as well?

Wow! The tension is amping up every day and I feel like we now have even more questions! So many people act suspiciously so I have no idea who I can trust!

What are you all thinking? Let me know!

15 thoughts on “A River of Royal Blood Readalong: Day 3”