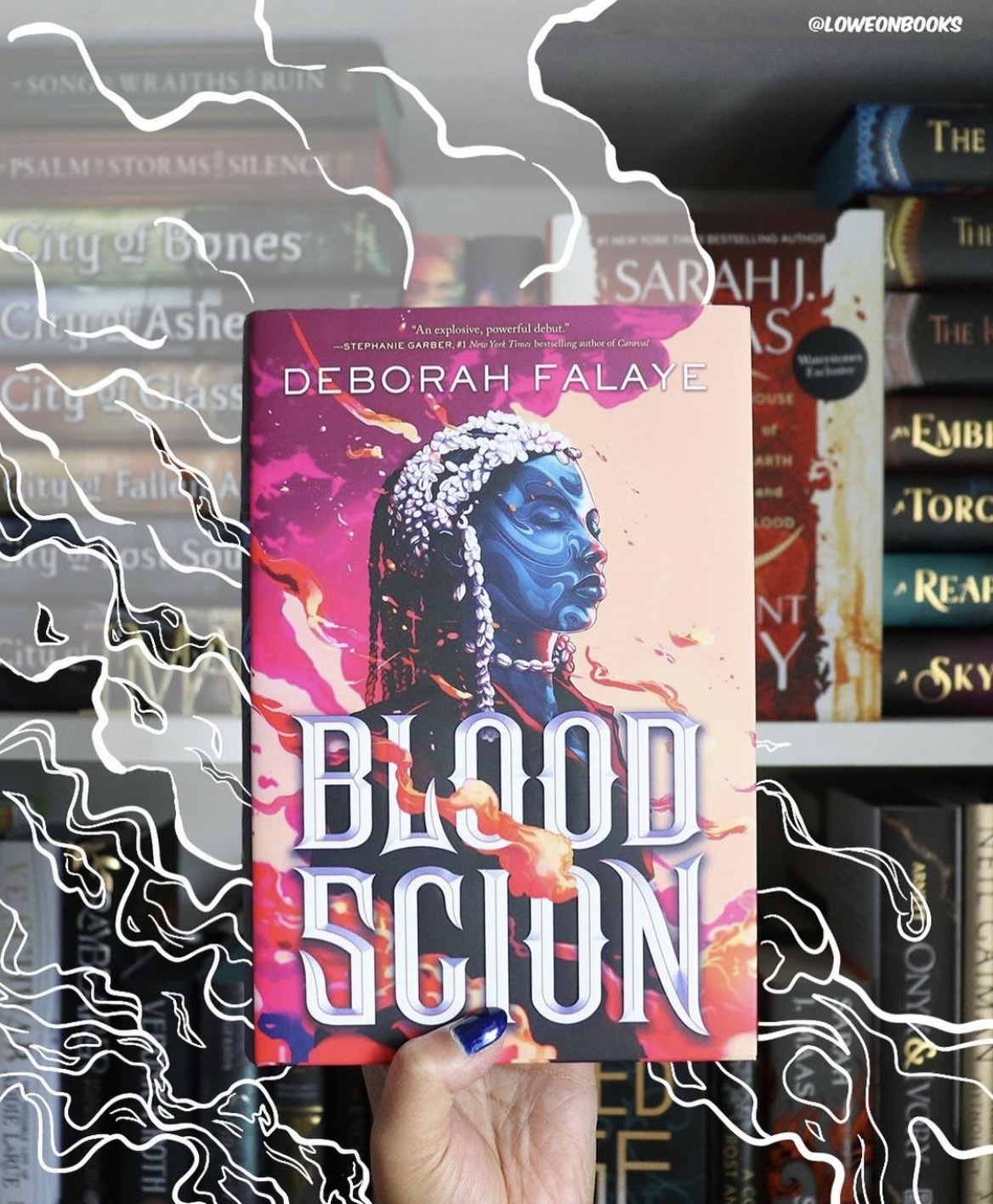 Happy Monday and welcome to day 1 of our readalong of Blood Scion by Deborah Falaye. I’m so excited to be reading this one with you, I hope you all love it!

Since today is day 1, we’ll be reading from Chapter 1 to the end of Chapter 8. Get comfy and let’s get started!

Please be warned, the following section will include spoilers for Blood Scion by Deborah Falaye from the beginning to Chapter 8. Please only read on if you have finished this section!

We’re joining Sloane as she digs through debris, assumingly to find her lost mother. Then she finds a scarf with the letter A. S. – Adeline Shade. I’m guessing this scarf was her mothers? Sloane knows she should leave soon, but now that she’s found something it’s a hope that she might find something else, some other clue that her mother or Felipe – her best friend’s father – were here.

Then she spots two bright lights and the Nightwalkers are here early. She – Sloane – is too late! She seems to know already she’s going to die. Who are these Nightwalkers? Why’s she in such danger?

She’s wayyy too late. The Nightwalker has caught her, dressed in the uniform of the Lucis, he pushes himself against Sloane and touches her cheek saying he’s never had a dark skin before, then calls into his radio that he’s “caught a good one”. Why are they treating her this way? She didn’t do anything!

Sloane eventually fights back but then something changes… a power is rising up through her veins, heat and flames crackling to life on her arms. As soon as the Nightwalker notices he scrambles away from Sloane and grabs his gun. In his shock, Sloane sees her chance to escape and slaps her hands against him and sparks burst from her fingers! She’s powerful but it doesn’t seem like she can control it?

The Nightwalker is screaming for her to make it stop but Sloane doesn’t know how. She calls the power her àse, she says she’s hidden it for years because she’d be killed if people knew of it… Interesting…

Just before the Nightwalker dies from the flames breaking out under his skin, he says he knows she’s a Scion and she’ll die for this. Sloane is a descendant of Shango, the god of heat and fire. She’s a living inferno. Damnnn girl!

Sloane makes it back to her home and her Baba is waiting, he can see straight away that she’s hurt and ushers her in, applying herbs and salve to her face, then Sloane says he should get ‘the tea’ and understanding comes immediately. Sloane speaks of the danger that comes with harbouring a Scion. The Lucis kill them all and anyone who dares to protect them, calling them ‘cleanses’.

Long ago each kingdom of Nagea was ruled by a Scion and they were revered, until the Lucis arrived and conquered the Yoruba and the Scions. Sloane speaks of how she cannot afford to be whole. People cannot know who she fully is, and so she has to hide integral parts of herself and her culture.

Her Baba tells her someone they know, a child, was slaughtered. Sloane grew up with Nicolai but he was due to be drafted into the children’s army and so he and two others attempted to flee but they were caught. Nicolai’s family were also taken for his betrayal. Now, other children will be drafted to replace the children who fled, Sloane could be drafted, since it’s her birthday and she’s now of age.

When Sloane wakes, it’s to the aroma of pepper soup (that sounds REALLY good) and her friend, Luna, Felipe’s child. Luna asks why she wouldn’t tell her she was heading to the foothills to search for Sloane’s mother and when this will end, her obsession to find her mother. Sloane shoots back she could ask her the same. Luna wears a long sleeve, obscuring self-inflicted scars covering her arms. Sloane’s argument is that if she finds evidence that the Nightwalkers were responsible for their parents’ disappearance two years ago, then the village will stop judging the girls and they can heal.

When Sloane storms off, she’s stopped by a messenger… he has her draft letter.

Sloane has been drafted into the children’s army and leaves in two days. Poor Sloane, and poor Baba! He’d just said Sloane was all he had left and now this! She’ll be gone for at LEAST 3 years. This is cruel. It gets worse, when she goes to find her other best friend, Teo, he too holds a draft letter. He wants to escape, he has a boat stashed away and wants to go tonight. Sloane tells him “there’s no freedom in running, only death. Yours, mine, Luna’s and Baba’s.” Sloane is right, and so brave. I don’t know what I’d do in her situation. Especially as a Scion, what if she’s discovered by the Lucis?

Sloane tells Teo if he runs she’ll report him. I’m so torn! I don’t know who to support. I know Sloane is trying to keep Teo safe but neither option is really stellar?

In her upset, Sloane ends up in one of the village taverns. She bumps into someone from a local gang, who goads her about a time after her mother left where she and Baba resorted to begging for scraps. Malachi tells Sloane he’ll see her in Avalon. He also got drafted into the army today.

When Sloane returns home, Luna and Teo are there and Baba is trembling. Luna asks Sloane to stay. I’ve got second hand upset because if that were me I’d have wanted to tell my Baba myself rather than Teo telling him. Baba seems upset that she’s not leaving with Teo and tells her he’d lay down his life if it meant saving her. Baba you’re too good for this world.

It’s completely understandable that one of Baba’s first thoughts is about what will happen if the Lucis learn she’s a Scion, I fear the same. Baba tells Sloane to go and be their finest solider, but the second she gets to Sahl, she’s to run away to the rebels in Ilè-Orisha, but if she goes, she can’t ever go back, and Baba can’t go with her. He says she has to say goodbye to him forever. I was not ready for this today.

That evening whilst talking to Luna and Teo, Sloane doesn’t tell Luna and Teo of her plan. She says she’s going to Avalon and they can write and draw in notebooks for each other, nothing of running to meet the rebels. Sloane lets Luna believe that in three years, they’ll see each other again, but we know differently, Sloane is leaving for good.

In the night, Sloane hears noises and fears it’s a Nightwalker raid… but it’s Teo. He’s leaving. Sloane takes the opportunity to tell him she loves him. Three years ago he told her he loved her, but she was too scared to say it back. With everything on the line, she’s saying it now… but it doesn’t change anything. Teo still wants to run, Sloane knows she can’t run away with him. With a kiss, they part ways.

The next morning, as she walks through the streets of the city, Sloane reflects on when she was eight years old and her mother told her about the statues in the city and how they’re a symbol of the Yoruba creation myth. Her mother was reluctant to tell the story, but eventually tells Sloane she will recount the story but they’ll speak of it no more after today. Sloane’s mother tells her how the Yoruba people were born, and how the Orisha desired control of their power. Oludmarè gave them some of his àse and Obatala, Yemoja and Shango descended. Sloane is a descendant of Shango, who laid claim to Oyo as the god of heat and fire. Sloane’s mother tells her perhaps they’ll visit Oyo one day. More Orisha arrived, the Yoruba knew the Orisha were sent by Oludmarè to protect them. When they began to marry, Scion’s were created, descendants of the Orisha. When the Orishas left, the Scion’s ruled in their stead. Young Sloane is understandably confused that if her people were revered so much, why are they hiding? And her mother explains that the Lucis have stolen what belongs to them for fear of their power. Her mother tells her to hide her secret, her power, it’s the only thing that will keep her safe. But back in the present day, seven years later Sloane recounts Baba’s warning:

“A Scion in Avalon is a sheep in a lion’s den.”

This is SO dangerous for Sloane. The whole concept of child soldiers is mortifying and heartbreaking but if they find out Sloane is a Scion, she doesn’t stand a chance.

When she reaches the Lucis’ dome, her notebook and herbs and daggers from her. Her only solace and safety. Sloane is ushered through, and assessment day has begun.

Almost immediately, the commander of the Avalon Defense Forces, Faas Bakker goes into a rant about how Scions are tyrants, scum who feared what the Lucis could do to the Scions “devilish practices”. Faas urges the children of the army to fight for the founding Lucis who sacrificed everything to be able to call Nagea home. Sloane knows they didn’t even give the Scions a chance to leave, they immediately jumped to murdering the Scions and Yoruba.

Sloane finds herself practising, aiming daggers at a target and… doing very poorly. And some randomer decides to comment on her bad form! He’s a boy, buzzed hair, ocean green eyes and tawny brown skin… possible love interest? Maybe too soon after Teo…

His scrutiny helps though because it encourages Sloane to do better. But then he tells her they (the Lucis or the army I guess) will break her. RUDE. Who is this kid???

When Sloane finally hits the mark, she turns to find the boy… he’s one of them, he’s from Avalon, with a commanding stance and expensive clothing, he’s engaging in conversation with a Lucis officer. Is HE an officer?

When Sloan’s eventually called in by a Lucis officer, the first thing they ask is if she’s ever seen a Scion. The Lucis are OBSESSED with Scions, that much is clear!

Then a guard comes in, dragging a young boy, not just any young boy… Teo. Oh my god… is he a Scion??? Surely not??? Maybe it’s a mistake?

What a start, and what a cliffhanger to end today’s section on! I don’t know about you, fairies, buuut I think I’ll have trouble stopping myself diving straight into tomorrow’s section!

See you tomorrow for more reading.