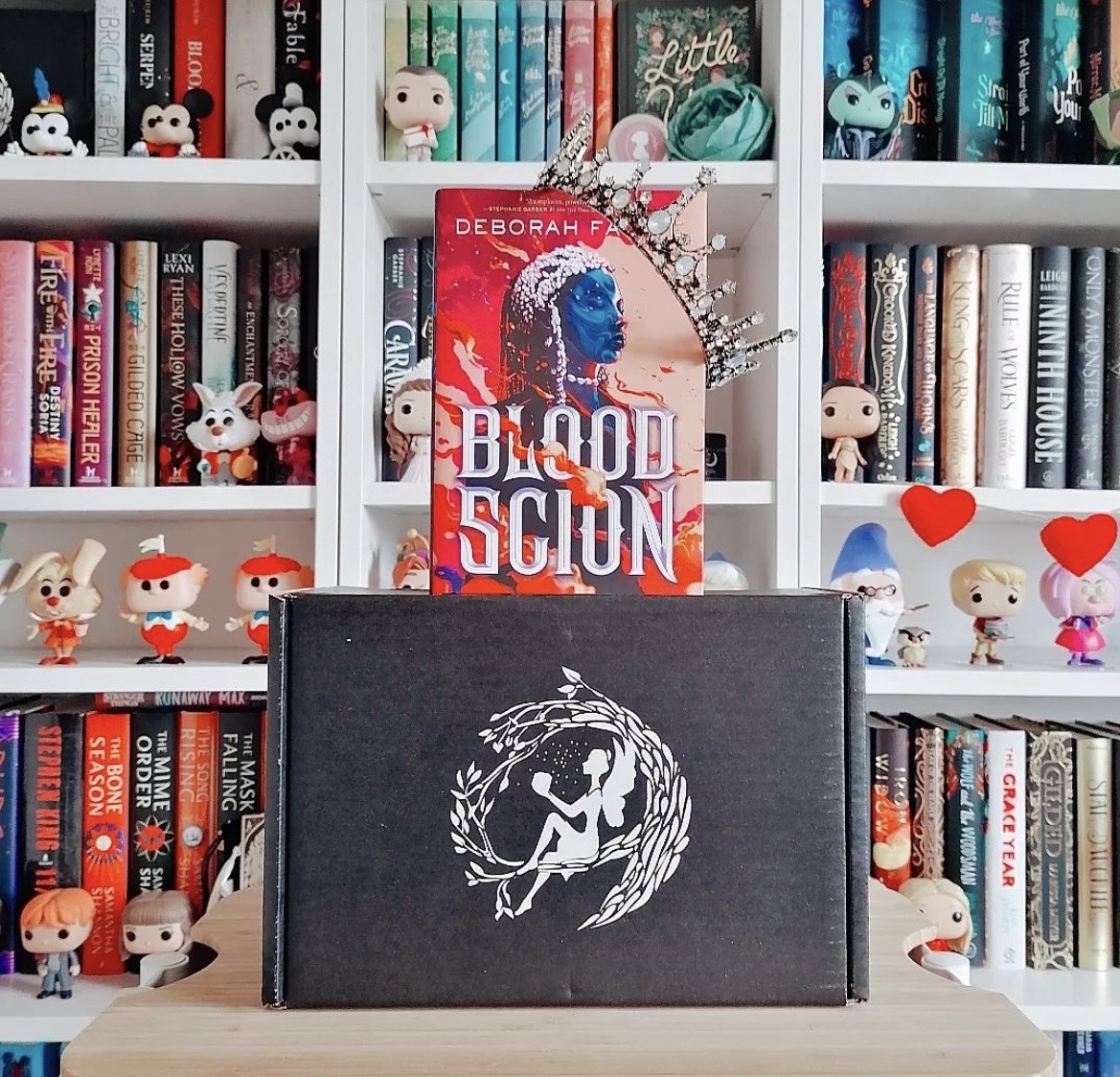 Welcome back to day 4 of our readalong of Blood Scion by Deborah Falaye! We left Sloane at a very scary, intense part of the book and to say I’m nervous is an understatement!

Today we’re reading from Chapter 26 to the end of Chapter 34. Get comfy and let’s get reading!

Please be warned, the following section will include spoilers for Blood Scion by Deborah Falaye, from chapters 26 to 34. Please only read on if you’ve finished this section!

Sloane wakes up in a clearing, alone. I can’t decide if that’s a good sign or a bad sign…

She’s not alone though, someone whispers her name and then fireflies are swarming around her. Is it an illusion? Sloane thinks so. Then she’s joined by a girl who’s wrapping rope around Sloane’s neck… Is this ALL an illusion? Wait, it’s not this time! It’s another recruit and she’s trying to kill Sloane. Kill or be killed, after all. Sloane gets there first though and murders the girl… but it doesn’t let her out? Dane said to get out you needed to kill or be killed. Sloane has killed someone, so why hasn’t she been let out of the forest?

This forest is messing with her. Now she sees her mama and she’s encouraging Sloane to come into the river and help her. Don’t do it Sloane! I’ve got bad vibes here!

Before she can reach her mama the illusion is gone, replaced with a hissing cobra. Then Sloane notices a boy next to her, he’s injured, veryyyy badly but he’s asking Sloane for help. Sloane tries but his wounds are too bad and when Sloane says so, he says he knows. He wants her help in another way. He wants her to set him free. And she does. Another death on her hands, another tally to mark.

Then, the worst happens. She bumps into Malachi. OF ALL PEOPLE! Sloane’s done too much to give up now, and tells Malachi if he wants to fight, they’ll fight! Team Sloane!!!

I know it’s cruel to celebrate a death… but my RELIEF when Sloane stuck the knife into Malachi’s neck was unmatched. Sloane has so much going against her, now at least she can rest easier knowing Malachi isn’t after her for revenge, revenge for an accident no less. It’s horrible what happened to his family, but Malachi vowing to avenge them by killing Sloane and her family isn’t a solution!

When Malachi is dead, a spirit appears. Her name is Alagba and she’s the spirit elder of this realm. She says Sloane is a descendant of an old enemy and reeks of his blood. Shango? Alagba reels off ancient riddles, and then she’s gone. Leaving Sloane alone again to ponder what’s happening. The trail reappears and Sloane hobbles out. Is she free? Has she passed Phase One?

Sloane makes it back to Fort Regulus and Dane is there to greet her. Sensing her turmoil, he asks her if she thinks the recruits she killed would have killed her. We know they would have, it’s why they were all there. Before he leaves, he loops a bullet chain around her neck, a prize.

When she gets back to her quarters, Izara is there. She made it! She doesn’t seem as rocked by the experience as Sloane though. That’s when she drops the bombshell that she’s dying. She has an incurable blood disease. Not only that… she isn’t actually Izara.

When Izara was drafted for the war, her sister Amiyah knew as a Scion it was too risky for her, so Amiyah, who we’ve known all along as Izara, took her place. She also plans to desert. Is it time for Sloane, Nazanin and Jericho to let Amiyah in on their plans?

They catch her up on all that’s planned, but they won’t let Amiyah risk her life trying to get into the Archives, she’s sacrificed enough.

Alright, fairies! Buckle in, it’s heist time! They obtain the map and get into the Archives fairly easily? I’m pleasantly surprised, no major issues. OH apart from the fact the tunnels are LITERAL GRAVES OF SLOANE’S ANCESTORS. Buried alive, no less.

Jericho’s found it. It’s not good news. His family died, they didn’t make it through the night. He gives the book over to Sloane, she has forty seconds to track down her mothers’ entry in the record. She’s not there? How can she not be there? She searches for her under another name, and finds her, but it’s all wrong. Her alias is down as Lieutenant Margery North and she’s dressed in Lucis uniform. What on earth?

For more information Sloane needs to find the Service Files, but they’re out of time. She’s come so far and she’s SO CLOSE. Sloane gives Nazanin instructions on how to get out of the tunnel and she and Jericho leave Sloane alone to find that last bit of information. Her mother entered Avalon with her little sister and took on a false identity, Margery, she and her sister became fierce Lucis soldiers. Her mother was caught by Olympia for the conspiracy to assassinate the king – was she part of that rebel group? They tortured her and somehow eventually she escaped and Adeline Shade took Margery’s place as her new alias, off the grid. Until she was captured and killed by Nightwalkers. Sloane was right all along. The Nightwalkers killed her mother, she never betrayed her family.

The rage Sloane feels causes her àse to rise once more, despite the ritual. Alarms are blaring. Nazanin and Jericho return and they’re chased by guards and Sloane’s fire.

They scramble back through the tunnel, but Sloane can’t remember which way they need to go. She loses Nazanin and Jericho as they race away from the leopard that’s now following them. She hears a guard scream “we’ve got them” and hears Nazanin and Jericho and she knows it’s selfish, but Sloane doesn’t turn back, she keeps going… right until she bumps into Dane anyway…

Back in the barracks, Sloane is covered in grime and blood, her injuries unchecked. Dane paces back and forth, up until the point where Sloane begs him to say anything and he says “You’re a Scion”. What will he do?

Dane’s response to all of this is “you should have told me” yes, Dane because you and your fellow commanders are so known for being approachable.

Amidst their arguing, Sloane tells Dane to kill him herself. He knows what she is, she’s the ‘scum’ they talk about, and yet, Dane just walks away and says he can’t…

For the next week, Dane avoids her completely and then disappears on a mission to the Sahl. No one has come to get Sloane so assumingly he hasn’t told anyone? I don’t know if that’s a good thing or a bad thing. Meanwhile Nazanin and Jericho are in Cliff Row, awaiting execution.  I hope Sloane can get them out or I’ll be big sad. Her mother escaped, surely they can too?

Sloane’s only plan now is revenge. She wants to win Faas’s bullets to get close enough to the queen and the bloodlines to kill them. Ohhh this is risky. If anyone can do it it’s Sloane.

As Sloane trains, Lord Sol appears rather creepily. He’s an internal advisor and somehow knows everything about Sloane. He speaks of seeing Sloane two years ago, through divination. He’s a Scion! An internal Scion! His father, the former Lord General, unknowingly married a Scion and it brought down his family. At four, Lord Sol was made to watch his mother die. The king used Lord Sol’s magic for his own benefit and raised him as a prisoner, he helps the royal bloodlines bring down the rebels? Lord Sol’s visions are used to hunt Scions, recruits and soldiers sent out to kill them based on where Lord Sol tells them they are. He feels guilt, being responsible for such death isn’t an easy burden to bear, and Sloane feels that too.

Theodus tells Sloane he can free everyone, and notes that there’ll be no peace until the Lucis are no longer ruling, which is why he’s not warning the bloodlines of her impending visit… he’s a rebel, he wants Sloane to succeed. He admits he can’t see past her mission but… it sounds like he’s saying she’s the chosen one???

That night as she dwells on what Theodus said, there’s a knock at the door… It’s Dane. Just Dane. He asks if Sloane wants to get out of here and Sloane tells him to lead the way!

I’m half hopeless romantic, half petrified! Does Dane like Sloane or is he about to secretly murder her for being a Scion? Guess we’ll have to wait until tomorrow to find out!

See you tomorrow for our last section!