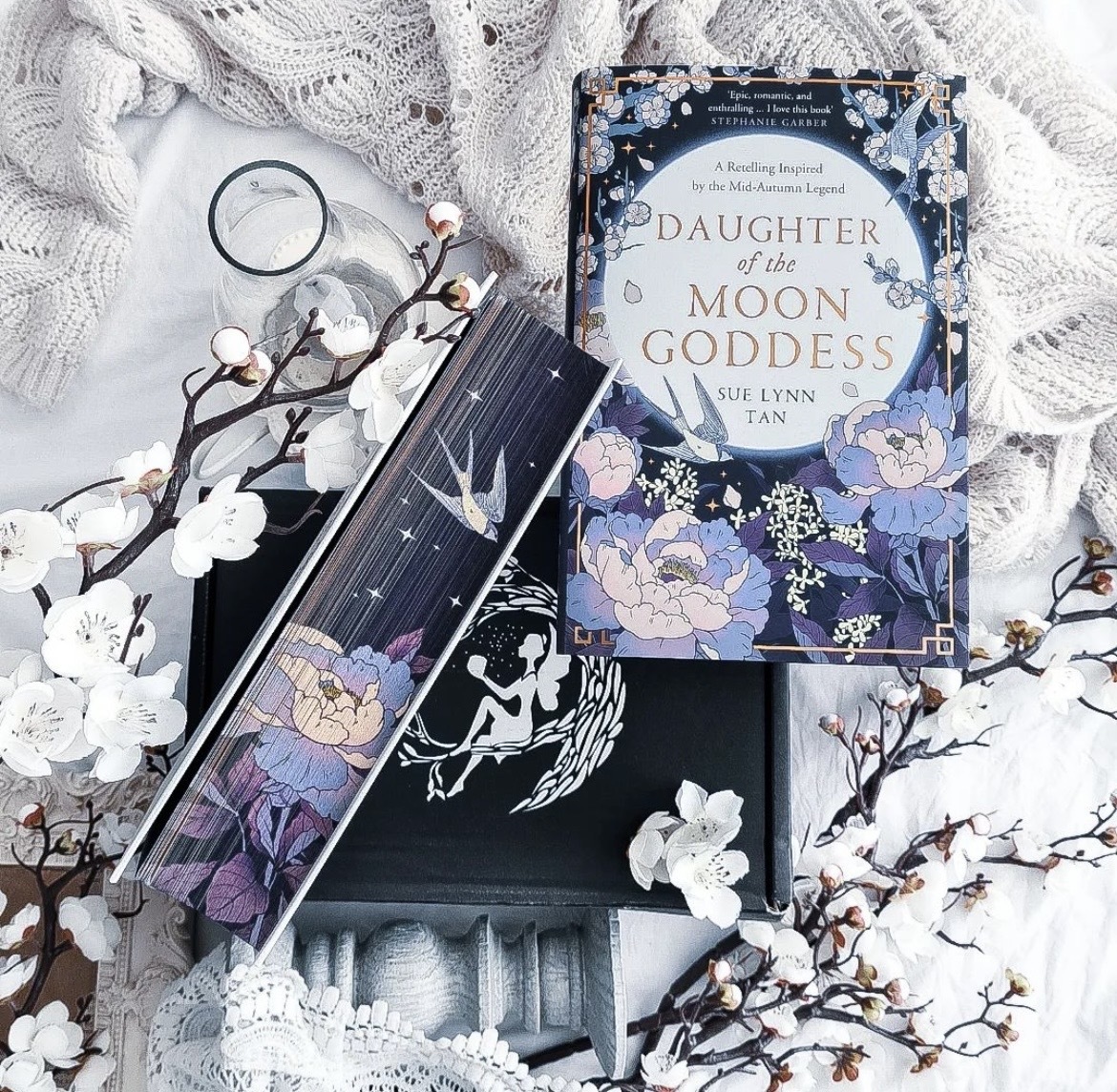 Welcome back to day 4 of our readalong of Daughter of the Moon Goddess! I hope you’re all enjoying it so far, we’re officially over halfway there and things are intense!

Today we’re reading from Chapter 25 to the end of Chapter 32. Get comfy and let’s get reading!

Please be warned, the following section will include spoilers for Daughter of the Moon Goddess by Sue Lynn Tan, from chapters 25 to 32. Please only read on if you’ve finished this section!

So, recap! We’ve (I say “we” as if we did all the hard work!) saved Princess Fengmei, we’re searching for Liwei. Fengmei is getting a bit… interested… asking Xingyin if she and Liwei are “good friends”. Then she stiffens and notices Xingyin’s Sky Drop Tassel, glowing red. Xingyin roughly teaches Fengmei how to hold a blade and tells her to run, knowing Liwei’s in danger.

Xingyin follows the Sky Drop Tassel to Liwei, she finds him with company and he’s bound in chains. Not just any chains either, they’re from the Demon Realm. I don’t feel great about this. Who’s this woman???

It’s Lady Hauling, the deposed Flower Immortal. Turns out she had a thing for Liwei’s father, he loved her back and promised to wed her as well as the empress but when she found out she paid Lady Hauling a visit and attacked her. I don’t condone what she’s doing now, but Liwei’s mother literally covered her in scars! Liwei puts way too much trust in his mother since he’s adamant there must be an explanation behind it.

Once Xingyin reveals herself, Lady Hauling makes quick work of establishing exactly who she is to Liwei and goading her about their love. It eventually makes Xingyin realise she’s still in love with Liwei. What about Wenzhi?

Lady Hauling gives Xingyin a chance to escape. Liwei and Xingyin must fight to the death, if she wins, she walks free. As for Liwei, she clearly has no intentions to let him go at all.

Liwei begs Xingyin to go, but we know her better than that. She’s stubborn and cares fiercely for those close to her. She’d never leave Liwei.

We know Liwei doesn’t want to hurt Xingyin, but Lady Hauling has him under her mind control and he is GOING for Xingyin. His jaw twitches as if he’s trying to fight it, and then his sword hits her in the chest.

She uses her power to seal the wound but Xingyin’s energy is dwindling. Xingyin does the only thing she can think of and seals Liwei’s senses with air as she did with her own around Governor Reynu to try and release Liwei from Lady Hauling’s mind grip. Uuuuh wait hold on, has she killed him??????

His hand is cold and Xingyin is apologising, Lady Hauling is clapping. Has she actually killed Liwei?

Xingyin demands Lady Hauling release the manacles around Liwei’s wrists so that she can return him to the Celestial Kingdom. Lady Hauling says she must drain his lifeforce, then she is hurtling away, slammed into a stone wall and engulfed in flames… and Liwei is on his feet? He’s not dead!! Did Xingyin just cloud his senses enough to make him seem so?

Fighting together, Xingyin and Liwei battle the guards and use their force to fling Lady Haulings vines back onto herself and trapping her amongst the rubble, glassy eyed.

They eventually regain some semblance of strength and find Princess Fengmei where Xingyin told her to escape. Then she notices their matching Sky Drop Tassels, is she realising there’s more to their relationship? Xingyin tries to defend them, saying it was a gift of friendship and then has to stand and watch as Liwei comforts his fiancé, helping her up and wrapping an arm around her. Xingyin thinks of the happy days ahead of her if she manages to get there, days hopefully spent with Wenzhi.

Xingyin is being awarded the Crimson Lion Talisman for saving Liwei and Princess Fengmei! She’s done what she set out to do! Xingyin says her wish is for Their Celestial Majesties to free her mother. Understandably, they’re confused and the empress asks who her mother is… It’s popcorn time again.

Xingyin makes them promise that her mother not be punished for her actions today, but while the emperor agrees to make that promise, he does not agree that she will not answer for her actions.

Xingyin thinks back on what Wenzhi said to her when they first met: “When the battle lines are drawn, advance with a clear mind.” and then she drops it. Chang’e is her mother. They’re… mad. Like really mad. The empress is demanding to know who her father is and Xingyin tells her.

Liwei steps from the dais and joins Xingyin on the floor to support her… then Wenzhi follows. Then General Jianyun speaks out on what he believes, of Xingyin’s bravery and strength. The emperor tells Xingyin she is still bequeathed the Crimson Lion Talisman but they will not grant her wish to free Chang’e. So instead Xingyin asks for a favour, the right to earn her mother’s freedom through a task the emperor picks. He gives her a seal that will release the four dragons, Xingyin must retrieve a pearl from each dragon and return it to the emperor. This sounds too easy…

Shuxiao is there to greet Xingyin, at least she’s not mad Xingyin hid her identity. Shuxiao tries to tell Xingyin she will go with her, but Xingyin tells her it’s not worth it since she’s in disfavour right now, it might hinder Shuxiao’s hopes of helping her family.

ALL IS GOOD THOUGH, cause Wenzhi appears to say she won’t be alone, he’s going too!! When Shuxiao leaves, Wenzhi and Xingyin have ✨a moment✨ and I am weak. Liwei has appeared, though, eeek. The love triangle is strong in this one. Liwei is mad that Xingyin deceived him. I understand he must be shocked, but surely he understands Xingyin had no choice? It’s been so hard for her! Xingyin goes to strike Liwei but he catches her wrist before the blow can land. Liwei says some pretty nasty things but quickly backtracks, admitting he’s just jealous after seeing her and Wenzhi so close (bruh you’re engaged). He wants to know if Xingyin meant what she said then, that she still loves him and she admits she does. The Liwei tells her he thought if they escaped Lady Hauling maybe they would have another chance. He does have his arrogant moments doesn’t he? I’m not sure it’s fair that he expected Xingyin to wait and use the Crimson Lion Talisman to request him. In the end, he tells her he will accompany her to the dragons, not because they owe each other, but because she is entwined in his life whether they’re together or not.

On their travels, they come across a story teller at an inn, Wenzhi (or young master as he shall henceforth be known) pays him to tell the story of The Four Dragons. After the tale, Xingyin discovers they have one room between them – not awkward AT ALL – and she suddenly decides she’ll take a walk, she’s not really tired.

On her walk, Xingyin is accosted by three men. They have nooooo idea who they’re messing with and she makes quick work of disposing of them, much to Wenzhi’s amusement as he catches the whole thing. After Xingyin divulges the extent of the injuries she inflicted, Wenzhi says to remind him never to get on her bad side and then his hands are slipping around her waist, and he’s KISSING HER! When they finally come apart, he says he has something to show her and guides her over to a river to watch a VERY romantic Water Lantern Festival (does this scene sound familiar? Hint: it’s on one of your endpapers!) He offers Xingyin a lantern to cast into the water to hopefully bring her luck and guidance from her ancestors.

After Xingyin summons the first dragon and it tells her of their history, the other dragons agree to give Xingyin their pearls on the condition that she will never force them to act against their inclination. They clearly have a lot of trust for her!

One of the four dragons comes forth to tell Xingyin that they have news of her father, unfortunately it seems Houyi died. Poor Xingyin, and poor Chang’e. She waited for him all those years, hoping to see him once more. Then Wenzhi’s gripping Xingyin’s arm… and his eyes are silver, Liwei is shouting and someone is apologising… what on earth is happening???

Xingyin has no idea where she is, but she has no access to her power. An attendant comes in and says they’ll let “His Highness” know Xingyin is awake…I’m spooked.

His Highness is Wenzhi, they’re in his home, the Demon Realm. Oh my word I am SHOOK, this plot twist!!! I didn’t see this coming at all. What’s worse is, he’s right! In a backward, deceitful way he had Xingyin’s permission to bring her here. He’s stolen the pearls from her. Her only way of freeing her mother. Is he evil then? Did he deceive her all along?

He says he never pretended to care for Xingyin, it was all real, but he USED he, now she’s trapped here. I’m so sad.

The Celestial Court apparently believes Xingiyn is here as a guest and conniving with Wenzhi to steal the pearls for the demon realm, would Liwei believe that though? Surely he knows Xingyin better than that, but Wenzhi’s point about her having hidden her identity for so long is a clever one.

With a bit of sneaky spying on Xingyin’s part, she understands that the Celestial Kingdom are on their way… and Wenzhi has a trap set up for them. This can only end badly!

I am… nervous. So nervous!

What are you all thinking after today’s section? I don’t want this book to end, I want Xingyin to be safe! I don’t know whether to support Liwei or Wenzhi, I’m so torn!

See you tomorrow for our last (cries) section!

29 thoughts on “Daughter of the Moon Goddess Readalong: Day 4!”