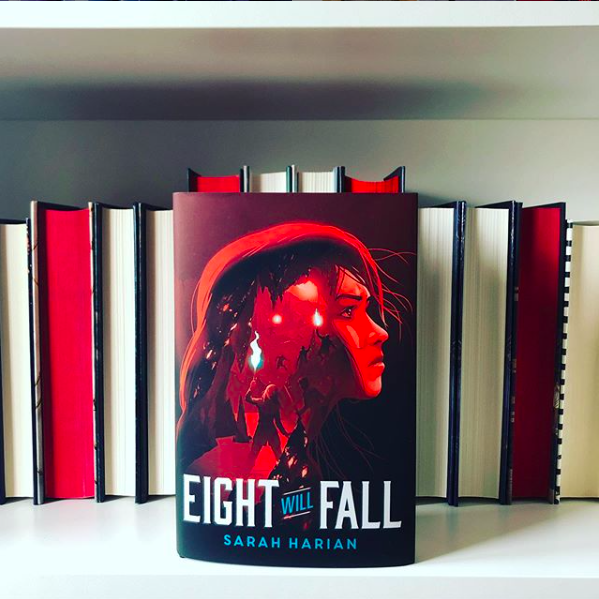 It is the 5th and final day of this months readalong! I can’t believe how quickly that has gone! However, you still have until the end of this week to enter the little giveaway we have going (see day 3)!

I really have enjoyed this readalong and chatting to you all in the comments has been so fun! I really hope you enjoyed the book!

be warned, the following will include spoilers for Eight Will Fall by Sarah Harian! Read only if you’ve finished the book!

Kyran begins to show Larkin what happened when he and the other disciples were banished. What does we want to gain from showing her this? Sympathy?

Oh my god!! Melay is actually Ilona!!! She’s been alive this whole time! I was not expecting that! But what is she doing with Vania and Garran?

No way, Kyran actually wants her to kill him so that she can absorb his power and kill Ilona! That had been his plan all along?

Jeez what a way to kill someone! Actually going into their chest and squeezing their heart!

Yay she managed to heal Amias!! They just want a happy, safe future together with their families and it’s so wholesome ?

Oh wow! Amias had been given a room in the Palace and the Queen had been teaching him to use his magic so that she could use him as a weapon ! It was only when he started to refuse that he was thrown into confinement.

Ooo yay they have an ally!! But she knew all along that they were the descendants!! Surely it could’ve been helpful to tell them!

Why do I have a bad feeling about Hela! Maybe I’m just suspicious of everyone after everything they went through!

Omg Amias was the spy!!! Has he been reporting to Melay/Ilona??

Larkin never felt them die so I had an inkling they may have survived!  Oh great but they’re being brought to the palace to be imprisoned, questioned and probably executed! Larkin better do something fast!

So many parts of their plan could go wrong and if they do, Amias could end up being tortured by the queen again ? I really hope they manage!

I can’t believe they’ve cut off poor Elfs wings 🙁 but wow Larkin is so powerful and manages to take out most of the guards in one go! Maybe they have a hope of succeeding!

There’s so much destruction and so much death but Elf managed to get some people out and there’s still time to help others!

And now Jacques battalion has arrived to help!!

I’m actually sobbing!! I had hoped that Garran would survive through this and I’m so sad ?

This is going to build her fury though and she won’t let Ilona get away with this.

Oh no! So Hela had betrayed them and was working with Ilona! And they knew Larkin would come for Amias!

Omg Hela is one of the disciples!!! Amias’ ancestor but she had never gone in to the reach, instead she had pledged allegiance to the Queen!

They decide, instead of killing Ilona, to banish her to the Reach and if she survives and makes it back to the palace she can live but that seems unlikely with all the creatures and the other disciples that are down there.

Jacque and Risa got to have their wedding after all and the Empaths now have their own village where they can live and use magic freely! They all experienced so much loss but they got out the other end and can start to feel happiness again and I’m so glad!

Thank you so much for joining this readalong and I really hope you enjoyed this book!

I want to hear all your thoughts on the book so let me know in the comments and we hope to see you for the next readalong!