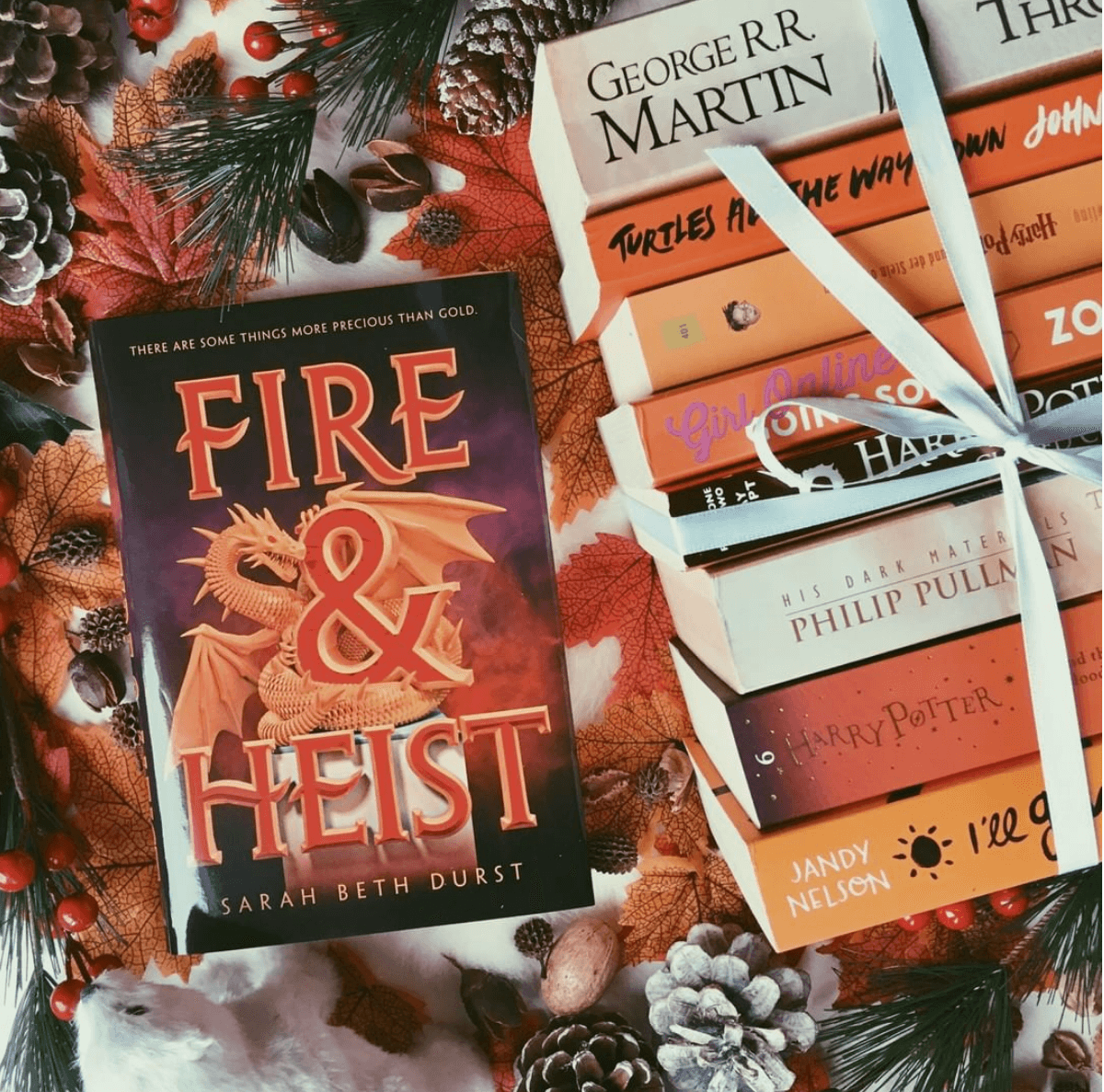 We have a super exciting day for more than one reason. First, the part we are reading today is the one we have been preparing for up until now! But second, it’s Readathon photo challenge time! Every month we host a little, super simple, photo challenge over on Instagram that only you guys can enter for a chance to win a FairyLoot box for free! Last month’s winner is @chelsi_a_bibliophile ! This time it could be you, the odds are very much in your favour! ^^

Please be warned, the following will include spoilers for Fire & Heist chapters 1-16 inclusively. Read only if you’ve finished those chapters!

Do you guys do this thing when you check where you are in the book (mid way or close to the end?) and what is happening plot-wise to decide if that’s the finale or if you should hold on to your seat for a bit longer?

So since the actual heist is happening at the middle of the book I am convinced some stuff will definitely go down still!

The part they trained for actually went by so quickly during the actual heist! I’m surprised. It was mainly smooth too, we only hesitated when it came to Gabriella passing over the flames. I really appreciated Sky helping her with the confidence, granted she would have had to do that for the heist sake but I think it was a friendship moment too and she spoke encouraging words she truly believes.

Ryan is saying that his father has come back and now we sort of lost connection with him because he’s dealing with him! Um. Excuse me, he was supposed to be out! Do we really have to deal with that guy now?

What does make me happy is the fact that they at least had a plan for this situation, because it makes absolute sense that they would! Imagine planning a heist and not considering a possibility that the father will get home. At least Sky seems to be somewhat collected while everyone else is busy panicking. I was worried her nervousness would ruin her efforts to breathe fire when it counted, but alas no, we are IN the vault. Maximus turns into a fire beast himself and fights the other one.

BUT THEN HE GIVES HER THE BAG OF TREASURE AND FLEES!

What the hell, man! We trusted you! We liked you! You were funny, we bonded over snacks!! You don’t just do that!

It’s the oddest disappearance too, he didn’t even take the treasure with him, nor do we know if he alerted the father and that’s why he was home now.

Then the father captures them and tells Sky that the jewel was the Door. You know. THE DOOR. He didn’t really have to explain that to us but hey that’s a very villainey thing to do, so thanks! Sky doesn’t really seem to put 1 & 1 together at first; I’m sure we can’t blame her as her situation is very stressful. The father pretty much gives her an ultimatum of either going through the Door with a promise he will not hurt her friends, or she can be killed…

I wonder what she will pick.

I must admit, the fathers methods and logic doesn’t always make perfect sense to me but hey, he doesn’t seem to want to make much sense either.

So now the question is: why is the council hiding the Door? If they can all go back home, why don’t they? Maybe because they won’t have power there? Or maybe he is the one hiding the door from the Council, so nobody really knows about it!

Is it just me or the other side through the Door  is very unsettling, like a fever dream? She basically wakes up in the other world and it feels like how you’d imagine heaven, but when you just don’t feel right there? Everything seems wrong? Why is perfection always so anxiety inducing? Suppose because we know nothing is perfect!

Oh hello dragons and unicorns! Wish Gabriella could see this! Sky is reunited with her mother, yay!  The mother doesn’t seem that concerned about what happened at home. However when Sky fills her in, she seems so shocked as if she didn’t expect her actions to have such an effect on the family.

Sky is also told that she cannot get back, and there is no wizardry on this side of the World, which is sort of ironic because everywhere we look there’s just so many majestic things happening! But at least it explains why her mother hasn’t come back, nobody can pass the fire beast. And even more so, it explains why Ryans father has the beast on constant guard mode even when it costs so much gold! I like it when things add up.

Very interesting. I really want to know what happens next and how is Gabriela! Ryan too, I suppose. But Gabriella!

I don’t think we ever had a chapter from another perspective though so we may not know until Sky does. But on another hand, Sky probably will learn how to turn into a dragon. I’m sure she will find a way to get back. It was almost sinister how everyone tells her not to worry, that she will love it there. But she is obviously very distressed so it’s very much a weird fever dream situation.

This is terrible. She has to perform and turn into a dragon for this reckoning otherwise she will have to basically live in absolute poverty. Obviously for her especially that would be very hard because she is pretty much a spoiled princess. Go figure something like an extreme class separation is taking place in this world, I knew it was too good to be true. Seriously, that’s so messed up!

But hey, at least we know Maximus’ motivation! I did say I don’t trust the weak reason he gave us before! It was a sneaky thing to do, even if it was for love. Thankfully it didn’t actually change much in how things went down but it could have! Love does make people blind. But are we mad at him? I’m excited to see what you think about that!