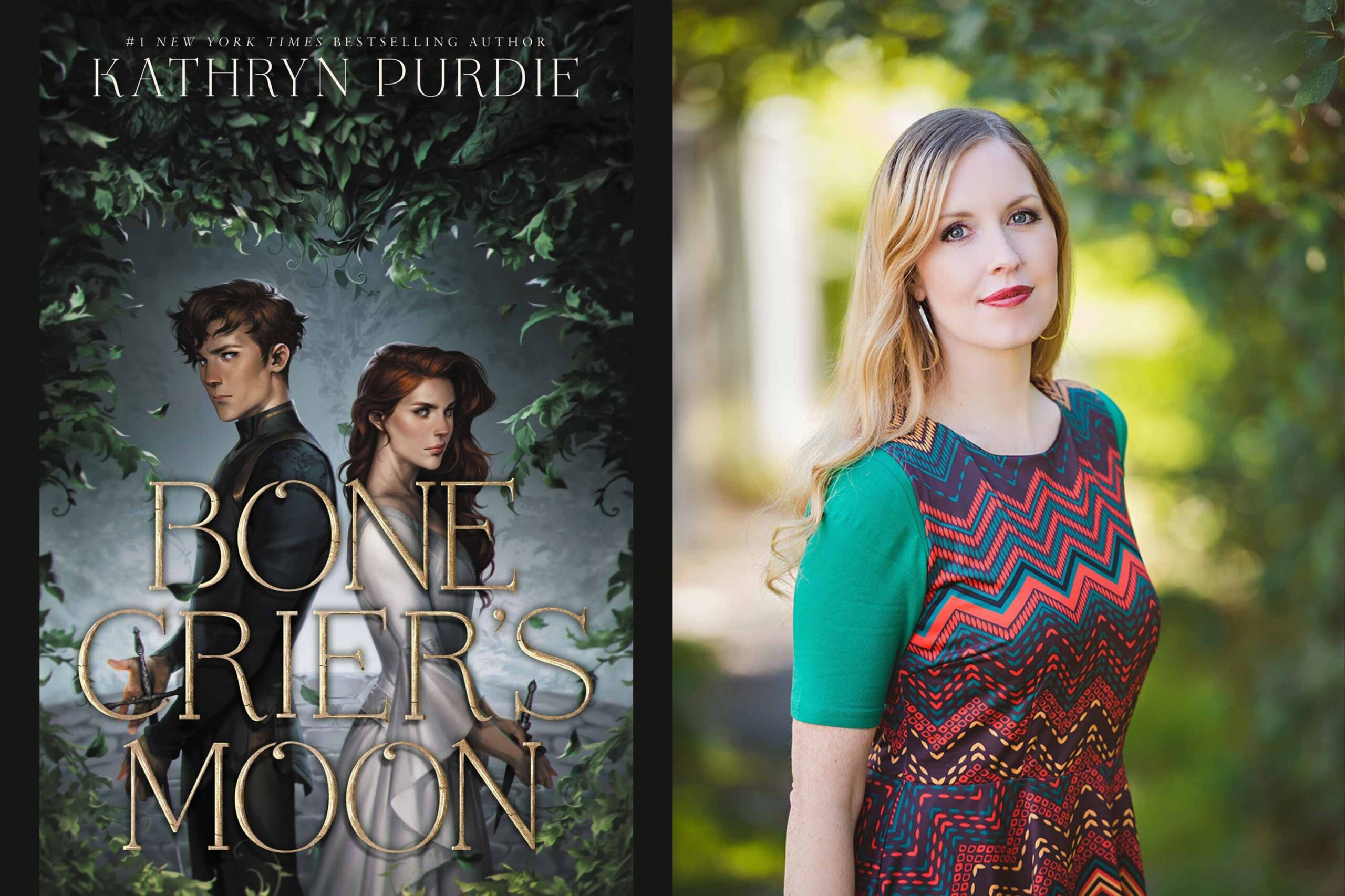 ABOUT KATHRYN PURDIE
In high school, Kathryn focused on acting and won first place for a monologue at a prestigious statewide Shakespearean competition. When she wasn’t on the stage, Kathryn spent her time composing sappy poetry and completing at least ten pages in her journal every night. Her author dad edited her school papers and taught her the art of writing. She went on to study acting in college and at The Oxford School of Drama in England. (All that character analysis transferred nicely to writing!) The writing bug bit Kathryn when she was in recovery from donating a kidney to her older brother. She found her old stash of short stories, and the inspiration for her first novel struck. She’s been writing fantastical stories ever since. A lover of art in all forms, Kathryn also enjoys singing and playing the guitar. Her husband is equally artistic. They keep busy raising three rambunctious and creative children.

What inspired you to write BONE CRIER’S MOON?

While doing research for another book, I came across “Les Dames Blanches” (women in white) in French folklore. In the stories, if a man comes across a woman in white on a bridge at night, she will ask him to dance, and If he dances with her, she’ll let him cross the bridge, but if he doesn’t, she will kill him. I was so captivated by that idea that I had full body chills! I wanted to know why these women killed men (was it really just because they were denied a dance?), and so I created my own story and my own mythology to answer that question.

Did you have to do any special research for BONE CRIER’S MOON?

I spent a lot of time researching animals with extra special abilities, especially those that can live in a habitat similar to the Mediterranean region of southern France. What I found is that almost every animal (even a small salamander) has really impressive natural gifts, so I had fun selecting the animals that Ailesse, Sabine, and Odiva chose to obtain magic from through “grace bones” so they can share the same abilities.

I’m a heavy plotter! I did extensive research and created a detailed chapter-by-chapter outline before I started drafting the book. Because the story is told from the alternating points-of-view of three characters (Ailesse, Sabine, and Bastien), crafting a careful outline was necessary to ensure that every chapter was critical and built off the tension of the previous chapter (or offered a reprieve from it). But even though I plot to such lengths, I always veer from my outline in favor of what my character tells me to do as I write. I replotted about 1/4 of the book from the midpoint onward because my characters refused to follow my plan for them. In the end, I always let my characters win those battles!

There’s a scene in the second half of the book that I had a lot of fun writing, especially in regards to Bastien. He’s a really guarded and tough character who has had to grow up way too fast, so it was super satisfying to see his shy and sweet side finally shine through. I love when he gets to be the vulnerable boy he didn’t allow himself to be for so many years.

Yes! To help keep the three point-of-view characters’ voices distinct, I made playlists for each of them, and each character ended up having a theme song: For Ailesse, “Heavy in Your Arms” by Florence + the Machine; For Bastien, “Can’t Pretend” by Tom Odell; and for Sabine, “Doll” by Helen Jane Long.

I’m a grazer, so I nibble on food throughout my writing days. I depend on Wheat Thins, cheese sticks, baby carrots, snap peas, “Kind” granola bars, and Vanilla Coke Zero.

Sabine’s storyline. I worked especially hard to make it just as engaging as Ailesse’s and Bastien’s, whose stories were innately easier to write because they have the literal life and death stakes. To amp up Sabine’s thread, I plotted a lot of mystery and exciting reveals (the biggest twist came as a surprise when I was drafting). I also used her point-of-view to show frequent scenes with the villain. Even though Sabine’s POV was the most challenging to write, it was also the most rewarding. Sabine is the moral heart of the book, and I loved exploring her character arc.

What can you tell us about the next book you are writing?

I’m currently in the revision process for the sequel to BONE CRIER’S MOON. Without giving away too much, I can say that the reader will get to know some new and fun characters, and Ailesse, Sabine, and Bastien will visit new places, delve deep into their origins, and test the limits of their magic. I hope readers will love it just as much as I do!