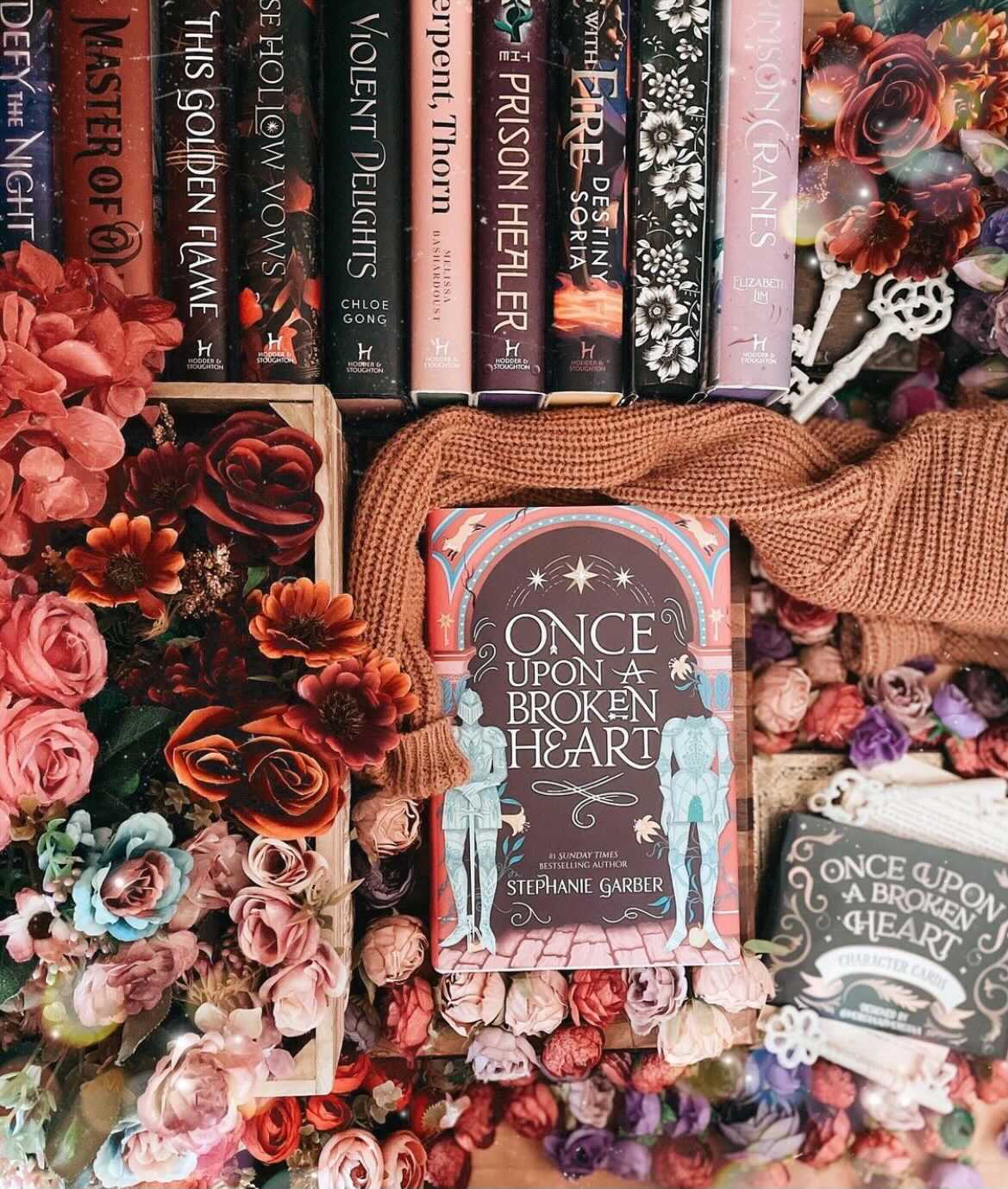 How is everyone feeling today? Have we been enjoying Once Upon A Broken Heart so far?

We left off yesterday at quite an exciting part so I’m very excited to dive back in!

Today, we’re reading Chapter 32 to the end of Chapter 43!

Please be warned, the following section will include spoilers for Once Upon A Broken Heart by Stephanie Garber, chapters 32-43 . Please only read on if you’ve finished this section!

So, will Evangeline go ahead with the wedding? That is the question we were left with yesterday. And we begin this section with her remembering her imagined wedding to Luc and learning of her angelic wedding dress and the doves that will soar down on Wolf Hall when they wed. Oh, is anyone else feeling so sorry for Evangeline? I just want her to be happy and have the happily ever after she deserves! Evangeline goes ahead with the marriage, but I can’t help but wonder how Apollo will feel after Jacks fulfils his side of the bargain?

After the ceremony, Evangeline and the Prince return to the Hall for a reception where Evangeline spends the majority of the time trying to work out if the curse has broken or not. Or does Apollo love her anyway despite the curse? Before anything can happen, Apollo’s AWOL brother, Tiberius arrives. Evangeline dances with him and they briefly talk about where he disappeared to and whether she loves Apollo. After the dance ends, he tells her he’ll let her know why he left the next time they meet, but that he doesn’t want to spoil their evening. Ok, so not sure how I feel about Tiberius… There’s something off about him but I can’t put my finger on what!

At the end of the reception, Evangeline sneaks away to find Jacks in the throne room. Does anyone else detect jealousy in Jacks at the thought of Evangeline making a deal with another Fate? Upholding his side of the deal, he places a bleeding finger of his to her lips and instructs her to kiss Apollo to break the spell he’s under. I don’t know about you guys, but I’m under the spell of tension between Jacks and Evangeline! They’re the ones giving me goosebumps.

Departing, Evangeline heads to the wedding suite where Apollo awaits with a glean of oil across his bare chest. Wanting some courage, she takes a sip of the wine left on the side and goes to kiss Apollo, but their kiss is interrupted by Apollo crying out and collapsing. Omg! Did Evangeline’s kiss just kill the Prince? And was this what Jacks wanted all along?!

Once discovered, Evangeline is tied up and taken away, assumed to have hurt the Prince. Unable to stop crying, soon Jacks arrives and wills the guards to leave them alone. He explains to her that it wasn’t his kiss that killed Apollo because there was no magic in it, only that he willed Apollo to love her because he’s a Fate. Realising what has happened to Evangeline and why she is crying (that she’s been somehow manipulated by another Fate and if they don’t help her she’ll cry herself to death), Jacks carries her out of the castle and to a woman’s house—someone who can save Evangeline (thank the FATES)! The woman gives Jacks an antidote to brush across her lips (which he does) and it works, but he still has to hold her close for the curse not to take affect. Oh hello forced proximity!

When Evangeline awakes, she realises that the person who saved her was LaLa AND not only that but LaLa is also a Fate! The Unwed Bride to be precise, whose tears can kill a person. LaLa explains that she did not poison Evangeline but she did sell off vials of her tears a long time ago and suspects it must have been one of those that was used.

While the curse continues to wear off, Evangeline reads that day’s copy of The Daily Rumour which confirms Apollo’s death and puts into question whether she was responsible for his death or whether she was kidnapped by the one who killed him. Evangeline volunteers to return to Wolf Hall and set the record straight so they can find out who really killed Apollo, but Jack and LaLa convince her not to. Instead, Evangeline agrees to stay with Jacks as long as they can be partners rather than her being manipulated. Before they leave, Jacks reveals who they will be going to see to try and figure out exactly who really killed Apollo, the Fate Chaos (who just so happens to be a vampire). Yes! I swear this book has EVERYTHING you could want in a great read, including vampires!

Before they leave LaLa’s flat, LaLa helps to disguise her so she won’t be recognised. Evangeline learns more about LaLa AND that there is a chance for Jacks to find true love: a girl exists who is immune to his kiss. And when Evangeline emerges in her disguise, Jacks appears VERY happy to see her. There is definitely something going on between them.

As they’re about to go, Evangeline spies Jacks holding a book—the same book she saw on Marisol’s night stand. Suddenly remembering her step sister after all of the commotion, LaLa and Jacks flag the dangerous nature of the book and though Evangeline defends her, I can’t help but wonder just what Marisol is up to…

Departing in haste, Jacks and Evangeline venture to Chaos’s lair. Posters of Evangeline’s face litter the posts across the streets. When they reach the doors to Chaos’s lair, Jacks wraps his arm around Evangeline possessively, nipping at her neck and telling the vampires watching that he is the only one who gets to bite her! Is anyone else’s heart racing a bit at that? Then, they move through the castle, spying many manacles and cages, which is very unsettling, before they meet Chaos himself—who also happens to be soldier that has been following Evangeline!

After tense introductions, in which Chaos asserts his authority, Chaos takes them around his lair, showing them an amphitheatre in which vampires bite and chase humans. Chaos explains it’s part of the initiation process to join the Order of Spies and Assassins and that every human in the theatre was bitten by a vampire with the intention of turning them, but they won’t become a vampire unless they drink human blood before dawn, which is concerning considering Jacks and Evangeline are the closest things they currently have to humans! They ask Chaos if he knows anything about who killed Apollo (being in the Order) and he tells them no, though he does reveal that someone contacted their potions master about a type of poison called malefic oil. Oh! Isn’t that the same oil Apollo had on before Evangeline entered the wedding suite?! But the question is… who put it there?

Evangeline then spies Chaos’s medallion which he reveals was given to him from the Valors (does this mean he was around during their reign?) and though Evangeline wants to question him further, a cage crashes to the ground and Jacks hurries them away before they become food… that is until Evangeline hears a familiar voice coming from a cage: Luc!

Jacks tells her that they have to keep moving but Evangeline is enraptured by Luc’s presence, especially when he says so many nice things, things she’d been waiting for what felt like forever for him to say. He tells her he wanted to be healed, that’s why he consulted vampires, but that he doesn’t want to be a vampire. Jacks accuses Luc of lying to manipulate Evangeline and to let him drink her blood, but then Luc reveals he was under a curse and all he could think about was Marisol. Feeling betrayed by her stepsister and sorry for Luc, Evangeline goes to help Luc and gives him a knife to free himself. But then Luc turns on her, needing human blood… Until Jacks leaps in the way. Instead of Evangeline’s neck, Luc clamps his fangs down on Jacks and drinks from him. Enraged, Jacks snaps Luc’s neck and though this was only for the purpose of incapacitating him, Jacks is keen to kill Luc so he can’t wreak havoc. However, Evangeline begs him to spare his life, and he eventually gives in. Thanks the Fates!

Hurrying away, Evangeline soon realises that she’s escaped danger only to be in potentially even more. Jacks grows quieter, his hair turns golden and Evangeline makes the mistake of meeting his eyes. And then she realises, Luc bit Jacks with venom! Does this mean Jacks is going to be a vampire?!

Yes, yes it does. If he bites and drinks Evangeline’s blood! Urging her to leave, Jacks is soon unable to control himself, pinning her against a wall. In the end, Evangeline locks him in a mausoleum to prevent him for biting her (or anyone else for that matter) though Jacks seems to be staring at the lock contemplating all the ways he can break it…

And that’s it for day 4! Wow, what a journey. Murder, identity reveals and vampires! We’ve seen it all. But how will Jacks fair? Will he manage to resist biting Evangeline? And can they find out who actually murdered Apollo?

I’ll see you tomorrow for the final chapters to find out!

35 thoughts on “Once Upon A Broken Heart Readalong Day 4!”