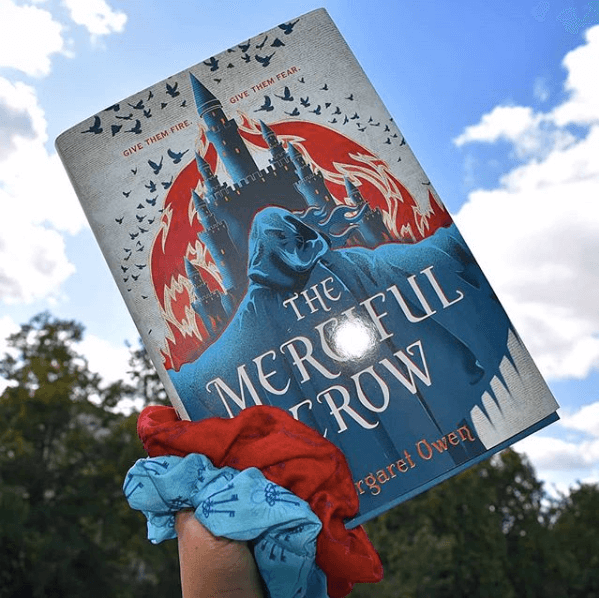 A beautiful photo by @grexcarolinii

Welcome back to the readalong for The Merciful Crow! Its day 3!

As you might know,  every time a readalong takes place we host a bit of a hush-hush competition, to give really good chances for those participating to win! It’s really easy to enter and you can win your next box for free! After all, reading together should be rewarded 🙂

Today we’re reading chapters 10-14. Shall we see how Fie, Tavin and Jasimir are getting on?

Please be warned, the following will include spoilers for chapters 1-14 of The Merciful Crow. Read only if you’ve finished those chapters!

Unsure of who to trust but knowing they need to get as far away from Cheparok as possible, Fie, Tavin and Jasimir make their way out of the walls.

They take up camp in the sand for the night but are found in the morning by one of the Queens best trackers! Tavin manages to freeze them and Fie and Jasimir tie them up.

“And the Queen could have had eleven skinwitches…Now we’re both down to ten.” Oooft she’s a fiery one!! I Love it!

Jasimir finally cut his hair which is basically like him saying he’s on her side and her team and he trusts her and I’m so happy about that! She may not have many people but she’s the chief and they’re going to make it!

The trio make their way to a crow shrine where they restock what they’ll need for their journey but they also find out that The Hawks have been near, looking for them and there’s now a bounty on their heads!

I wonder if, now that Fie knows them more, she’ll be able to tell the difference between Tavin and Jasimir what with Tavin being glamoured to look like the Prince again…

Aww he’s promised to help her get her kin back once the Prince is safe! And the world thinks he’s dead so he can’t really go back to the palace so maybe he will actually help her!

And Jasimir is going to teach her to read! That will definitely help her be a better leader I think and gives them something to do while they travel! Hopefully, with the Owls telling the Vultures that they’d seen a band of crows heading the opposite way, the trio might be able to get a head start on their journey to Trokovoi without being followed!

Or maybe not! I wonder who found their camp! It’s interesting that none of them recognised the whistle sound or have any idea who it was…A new enemy they’ve not encountered yet?

Answering a plague beacon right now seems like a risky move but she is bound by duty I suppose and the plague would spread if she doesn’t answer it…hope this doesn’t end badly though!

I feel so bad for Fie having to do her first mercy killing on her own and under such bad circumstances! The villagers are acting so hostile towards her and keep mentioning the gentry! I’m really worried it’s a trap or something!

Ahhh no it was a trap! Tatterhelm has found them!! How are they going to get out of this one? And now they are running again! Surely the can’t outrun the horses! It seems the Prince had the same thought and directs them to the cover of the trees!

I hope they find a good hiding spot and Tavin has time to heal himself or they won’t be going anywhere quickly!

Oh no! Did using 3 teeth at once take too much out of Fie?

Ahh I wish she would stop pushing Tavin away! They need to work together if this is going to work and I need them to be friends even though their castes say they shouldn’t be.

Tavin must think that they aren’t going to get to Trokovoi without a fight since he wants to train Fie to use a sword! It could definitely come in handy and their enemies won’t be expecting her to be able to fight but will they have time to get her ready?

Awww I definitely thought they were going to kiss then….what do we think is going to happen next! Will they make it to Trokovoi and if they do, will it be allies or foes waiting for them??

And we are done for day 3! I have gone through a rollercoaster of emotions today! Did you enjoy todays chapters?

Let me know all your thoughts! I really hope they make it to Trokovoi and receive a warm welcome!