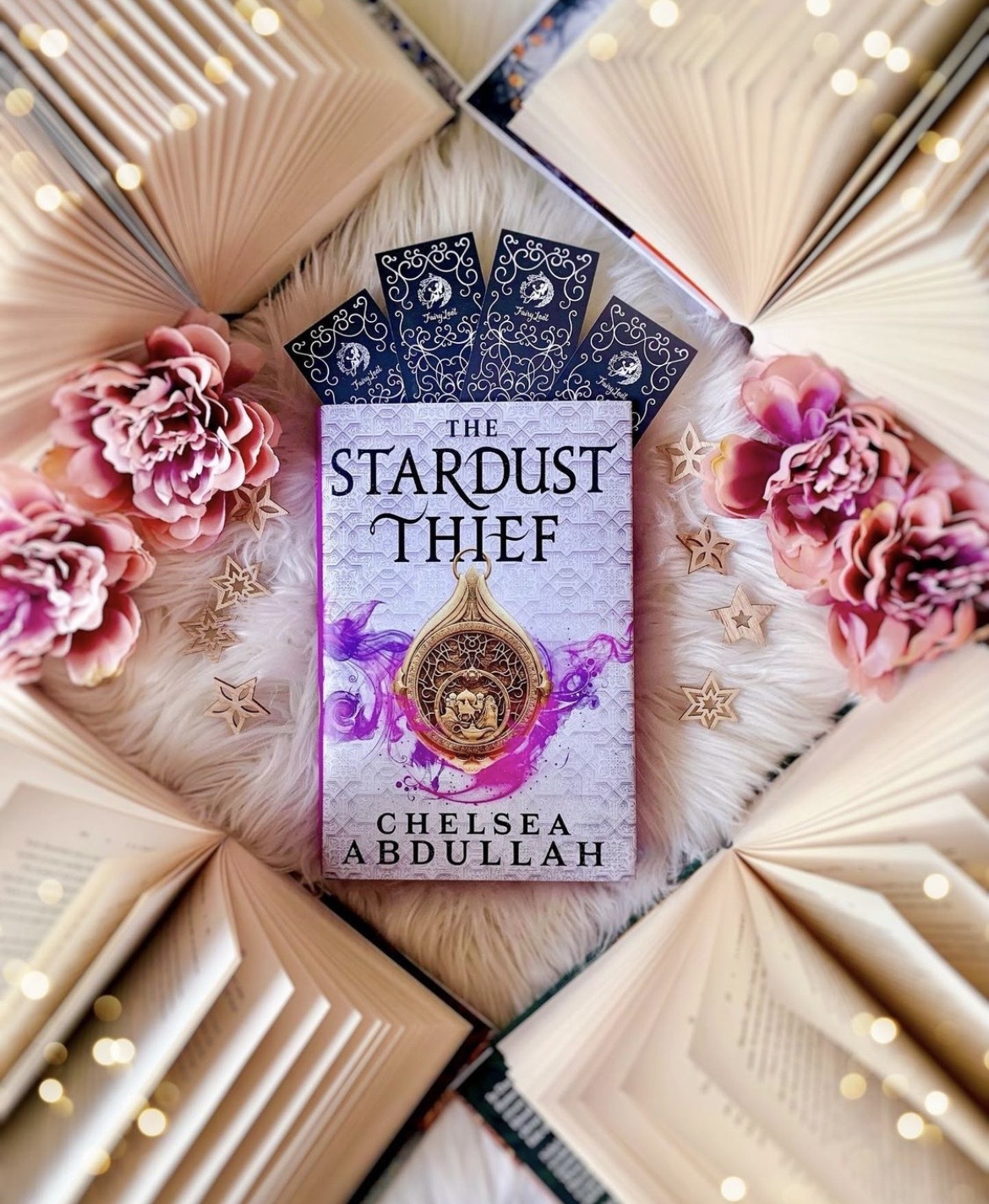 I hope that you’re all loving The Stardust Thief so far! It’s now day 3 and things are really getting interesting!

Today we’ll be reading from Chapter 27 to the end of Chapter 41, let’s jump in!

Please be warned, the following section will include spoilers for The Stardust Thief by Chelsea Abdullah, from chapters 27 to 41. Please only read on if you’ve finished this section!

Mazen has a strong dislike for Ahmed… I feel similarly. Something feels off about him! Mazen says when they were younger his father would make him look after Ahmed and Ahmed would do all he could to escape Mazen and Mazen would end up in trouble. But now he has to pretend they’re friends.

Ahmed asks Mazen about the relic, the bangle on his wrist and appears placated by Mazen’s story of it being an heirloom, buuuut then points out his earring, the one Omar wears constantly since it was his mothers, is missing. Mazen lies and says he took it out during the storm to prevent it being lost and Ahmed acts like he believes it… but I’m not so sure he does.

Ahmed asks about the journey and Mazen brags and shows him the collar, the relic capable of possessing people and tells him of the journey. Whyyy are you doing this Mazen? I don’t trust this man! When Ahmed says he’s surprised Loulie hasn’t tried to barter the relic off him, Mazen takes his chance to find out more about how they know each other. Is he jealous?

Ahmed does seem very smitten on Loulie, but I’m not entirely sure she’s sold on him. Mazen doesn’t seem to think so either. Very strange.

When Aisha and Mazen visit a tavern later on, even Aisha spots something between Loulie and Mazen. He watches her with longing as she walks down the staircase. Aisha, of course, can’t keep quiet about this and winds him up telling him that his lovesickness is showing!

As Aisha and Mazen discuss what route they’ll take to their destination, Aisha opens up a little bit to Mazen. She lived on a farm until her village was slaughtered by jinn. Then she felt she had no choice but to pick up a weapon and kill jinn. Then suddenly Mazen bumps around frantically, saying he left something with Ahmed… Please not the relic, Mazen. I will be so frustrated with Mazen if he LEFT the relic behind!

Ah. Aisha searches his satchel once he leaves… the relic is not there.

Mazen rushes back to Ahmed’s residence… then starts to hear voices. As he’s trying to get rid of the voices, he realises he can move his shadow? He pulls it over himself and hides within it… This is a strange turn of events? Any theories?

Back at Ahmed’s residence, he’s acting very strange. Then out of nowhere he’s asking his guests if they kill jinn to steal their magic or for blood or for the thrill. Welp. That’s Mazen’s hope that Ahmed isn’t prone to possession out the window. 💀

When the noise of a heartbeat starts to grow, Loulie realises it’s coming from her compass and she’s thrust into a vision, or a memory. The memory is of hunters catching a jinn. The jinn almost seems to turn herself into a compass to escape the hunters, in a last ditch effort to guide someone – Qadir maybe?

Then Loulie is awake and knows the truth. Her compass holds the soul of a jinn, a life. Ahmed – or whoever inhabits Ahmed – tells her that now she knows how it feels for their kind to die. She isn’t a hunter though. She’s no jinn killer, her bodyguard is a jinn! Regardless, he holds a knife to her throat.

So… is Mazen still possessed? Has the shadow jinn from the start been inhabiting him unknowingly all this time? Wait… but Mazen is Omar, so is it inhabiting OMAR? He’s seeing the shadow jinn’s memories. Surely that means they’re connected in some way? Any theories, fairies?

When Mazen makes it to diwan, he finds Ahmed causing mayhem, accusing everyone of killing jinn. He holds Loulie by her collar and she’s limp, Ahmed is about to strike her when Mazen tackles Ahmed to the ground. No one can stop him though.

Now, Loulie is back up, threatening the jinn with her enchanted knives. They can decipher friend from foe (cool) so Loulie is not worried that she’ll harm Ahmed. Ahmed is getting away, and Mazen knows he should give chase, it’s what Omar would do. Mazen doesn’t believe in himself though, he thinks himself a coward. A coward wouldn’t have taken a possessed wali down to protect a certain Midnight Merchant though…

Aisha appears just in time and pries the collar from Ahmed’s neck. Mazen throws the collar to Loulie and tells her to neutralise it.

Ahmed – real Ahmed – is back and all he can do is murmur apologies. Loulie comforts him and Mazen lets everyone walk away. When they’re gone, he considers his injury. He assured them he’s fine and it’s only a flesh wound but when he checks… his blood is black. Ideal!

Loulie has a flashback to when Qadir first taught her about relics. He said they were enchanted by jinn, but left out the bit about them actually containing the souls of dead jinn. Understandably, present day Loulie is upset that Qadir lied to her and allowed her to make a name for herself essentially selling jinn souls. I’d be mad too. She confronts Qadir and he says he wanted to give her a purpose after she lost her tribe, her family. I’m torn. Qadir lied with good intentions, but that doesn’t make it ok. He tells her if she disagrees with the lifestyle now that she knows entirely what it is, she can relinquish it. Qadir feels he owes a lot to the jinn encased in the compass, she saved him, freed him and guided him. Loulie rightfully reminds Qadir that he does not owe the jinn her life. She knows he’s sorry, but she says she needs space and she leaves Qadir after he tells her he has bound the magic of the collar. At least that can’t do any more harm!

Aisha is furious that Mazen gave away the relic. She calls him a coward but I don’t think that’s entirely fair. Loulie can keep it safe, the magic is now bound, he’ll face the wrath of his brother eventually and I’m sure he knows that. Mazen decides he should probably come clean about the whole ‘black blood’ ordeal and shows Aisha. She orders him to take off the bangle and when he does, his blood is normal. Aisha isn’t too concerned and thinks it’s just a side effect of the jinn magic… but I feel like it’s something more sinister!

Aisha meets with Junaid, another of the forty thieves, and he’s to pass onto the king (Omar) what happened with the wali. She tells him to deliver the message that she can be trusted to watch the prince and the relic… Do we think she can?

Loulie wakes in a spare room at Ahmed’s residence and she’s not surprised when there’s no sign of Qadir. She knows their bond is stronger than a fight but she’s still hurt. Can’t blame her either, her empire was based on a lie.

She speaks with Ahmed and tries to comfort him, telling him it’s not his fault. Then Mazen arrives to apologise for his carelessness in leaving the relic. He also confronts Loulie on her “injured” hand. She tries to say she has jinn blood put to one side, she doesn’t give it all away, Mazen is sceptical but drops it. The last thing Loulie needs right now is for them to discover her bodyguard is, in fact, a jinn. Loulie leaves Ahmed with the promise that she will return and tell him of her adventures, but they both seem to know now that the engagement will not happen. He – through unspoken words – apologises that he could not convince her to accept the proposal. When they part, Ahmed looks defeated and Loulie tries to squash the sense of foreboding she feels watching him walk away.

They’re back in the desert, but the silence is suffocating and it doesn’t take them long to work out there are ghouls about. They eventually come across a campsite, and a messenger. He recognises the High Prince immediately, then addresses Aisha as the Midnight Merchant…

Aisha corrects him and Loulie asks if they could have sanctuary, He agrees and the tribesman starts telling them of desert gossip. They’ve heard rumours of a hunter who works alone. Dressed entirely in black. Loulie is immediately eager to know more, but the tribesman doesn’t know much else about him.

Later, Mazen is telling stories. He ought to remember that Loulie has witnessed him telling stories before and if he’s not careful, she may recognise that he is in fact, Mazen and not Omar. Oh… maybe not, Loulie just wonders if there’s always been such a discrepancy in his personality. The thought that he could be Mazen doesn’t even cross her mind. She eventually wakes from a nightmare and Qadir is beside her. Qadir wants to tell her a story about himself and his markings. One in particular, is a mark of shame. He committed a crime in his hometown and that’s why he was cast out and marked. He tells her of the compass, and that the jinn inside is named Khalilah. She was Qadir’s greatest friend.

Aisha wakes Mazen the next morning and warns him to be quiet. The ghouls are around. They stay quiet long enough for the ghouls to pass, or so they thought. Then a storm of ghouls appear. Mazen starts to notice things about Qadir, how he appears to shimmer and how flames appear in his eyes. Qadir tells them of his plan to ride into the centre of the mob, Aisha doesn’t want to (lol who WOULD?! I would definitely object!) but they follow Qadir regardless.

Loulie thinks back to the hunter who killed her tribe, the very same man stands before her now. Imad. A former thief of the sultan’s forty thieves. Now Aisha is hurt too, and Imad has them all right where he wants them. Imad strips Mazen of the bangle and now everyone’s secrets are outed once more. Omar is Mazen, and Loulie knows. Qadir is a jinn, and Mazen and Aisha know.

Imad is looking for Omar, but won’t tell Mazen why, but it seems like Imad intends to use his new prisoners to reel Omar in.

There is one thing Imad DOESN’T know though. Mazen can still control his shadow. He slips it over his head and sneaks out of his cell.

Loulie is paid a visit next. Imad seems to think she knows where Omar is finding his relics, but Loulie doesn’t have anything to do with it. Any answers Loulie does know, about the relics Imad found at the campsite, she will not reveal, and so Imad will not reveal anything either. He walks away and leaves her to grieve her loss in the cell, feeling weak.

This section… broke me. I am not ok.

Do you have any theories and what will happen? Let me know!

See you tomorrow for what is hopefully a less gut wrenching day four!