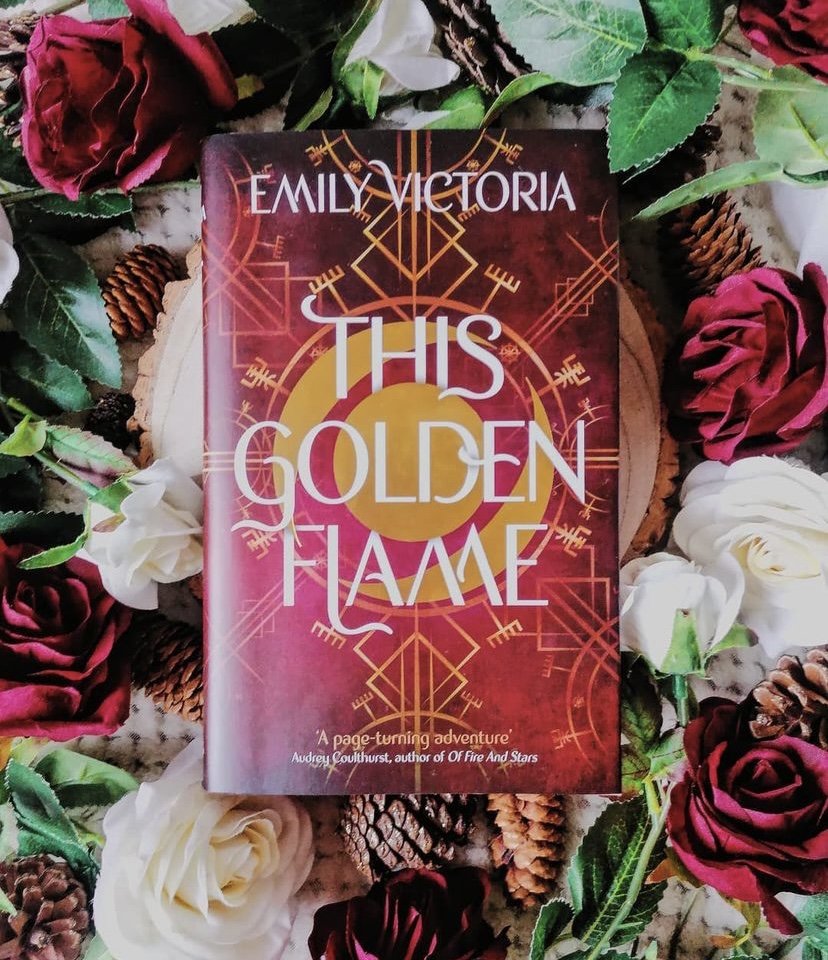 Its day 2 of our readalong of This Golden Flame!

Who’s ready to jump back into the action? I know I am!

Please be warned, the following will include spoilers for This Golden Flame by Emily Victoria Chapters 8-13! Read only if you’ve finished those chapters!

Today’s section opens with Karis awaking from a nightmare, as the memory of her and her brother’s capture by the Scriptorium resurfaces and we learn that she feels responsible for their separation. No wonder she’s trying so hard to find him!

However we still have some tension between Dane and Karis due to the fact that she kept her plans from him. Their lives were going in different directions and she was ready to let go and find Matthias without him. But ouch, she was really just going to leave without saying goodbye?

Oh no Dane reacts to the news that Master Theodis is Alix’s father in the expected fashion by saying he’s a war criminal, who sabotaged the other Scriptmasters, and tried to take all the power of the automatons for himself. Poor Alix, if only he could remember what happened, perhaps the damaged runes on his arm are causing the gaps in his memory?

Interestingly he does remember his father saying that he had been training to do something, if only he could remember what that thing was…

Was he truly made to be a weapon? Any early theories folks?

Oh wow just as a plan was set into motion we now have pirates!?! Enter Captain Zara of the Crimson Streak!

Seems they have stumbled upon one of Captain Zara’s hide-aways. Alix takes a bullet to the shoulder trying to  save Karis from the pirate’s clutches but Zara has Alix’s tome, things aren’t looking good folks!

After a quick getaway from a Scriptorium ship, Zara frees Alix from her command… just to have them become captives on her ship. They have a common enemy in the Scriptorium perhaps this will end well? *Crosses fingers*

Who else has been loving seeing Karis rush to defend Alix and correct others when they refer to him as anything other than “he”, or as a person generally? We love to see it!!

I’m very intrigued about Matthias, what are your thoughts on the snippets we have had of his character?

Okay maybe Zara isn’t so bad? The flash of interest she showed at the mention of “golden light” may be cause for concern though? What is she hiding? Either way our trio don’t really have much of a choice but to work with her here huh?

Hmmm do we trust that she will return Alix’s tome to him when they reach Valitia?

Thankfully Finn and Dane reach an understanding and Kocha and Wreska seem happy to have the help of more script workers on board! It seems there’s many more ways to script work than Karis ever knew! Does Karis have the potential to be a master script worker too?

That didn’t end well for him huh? Oh yeahhhhhhhhhhhhhh Zara is going to teach Karis how to fight! Give this girl a dagger indeed!

Who else is loving seeing the banter between Karis and Dane, is all forgiven between these two? Karis and Alix’s bond is strengthening too! But Alix has a very valid fear, what if Zara learns something from Alix’s runes that could hurt them? How much can we trust her?

We learn that Zara certainly has a vast knowledge of runes herself and that Alix used to be able to feel the energy given off by other automatons. Zara gives him the same feeling, what does that mean though??

He also can’t stray far from his tome and if it were destroyed, he doesn’t think he could survive it…oh no, let’s hope they can retrieve it!

Woah wait Ava has an “obey” rune on her wrist?! Can runes work on people too? That’s a horrifying thought!

So Zara thinks Alix’s runes may be the clue to the finding out what that “glowing light” he remembers was, come on Zara stop being so vague! Any theories as to what she’s holding back folks?

Ooooh who is this person who can help figure out his runes? Will they be able to help unlock Alix’s memories? Karis is desperate to reach Valitia to find her brother but she agrees to this detour for Alix. Let’s just hope this mysterious rune expert can be trusted!

Wow so much happened in today’s chapters! Things are moving so quickly and I can’t wait to see what will happen next! Let me know your thoughts and theories below and we’ll chat again tomorrow!