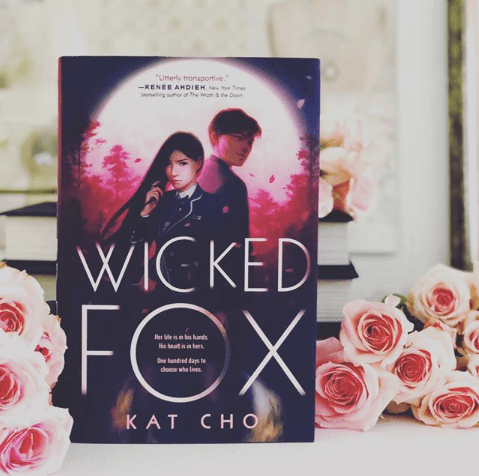 Its day 1 of our “Wicked Fox” readalong! It’s really nice to see so many people who have participated before and to any of you who are joining for the first time, welcome! I really hope you enjoy this readalong!

I’ve heard really good things about Wicked Fox so I’m very excited to dive into it and see what happens with Miyoung and Jihoon!

We’re starting the readalong with chapters 1-13 inclusive so grab a cup of tea/coffee/your preferred reading beverage and lets get some reading done!

Please be warned, the following will include spoilers for chapters 1-13 of Wicked Fox by Kat Cho. Read only if you’ve finished those chapters!

We meet Miyoung on top of a building where she is looking for a man who killed a young girl. We learn that she kills men, who have committed terrible crimes, on the full moon as it allows her to consume their energy without having to rip them apart viciously.

Jihoon, we soon learn, is from a poor family and he doesn’t believe he has good prospects in life so doesn’t really care about school and is always late and talking back to teachers. He does what he wants and, for the most part, gets away with it by charming everyone!

Those woods don’t sound very welcoming at night…maybe he should listen to the shaman!

Of course when it’s pitch black the dog runs into the woods! But they’re not alone!

Jihoon comes face to face with a strange creature but before he can figure out what it is, the creature has it’s arm around Jihoon’s back and is strangling him!

A girl (that I’m guessing is Miyoung) shows up and distracts the creature. She manages to fight it off and eventually kills him!

I couldn’t help but find it quite funny when she sat up and slammed into his forehead. They’re very different characters, Miyoung is very serious and guarded and Jihoon messes about a lot but pulls through when he has to!

That must be her fox bead! We already know that without it, she’ll die but does she need to just have it on her person or does it need to be back inside her? Either way, she got it back from Jihoon very fast!

So happy Dubu is still alive and okay, if a little shaken!

Oooo yeah she seems quite worried that he picked up her bead…must mean something!

Ah that will be why! If someone gets her bead they have complete control over her!

Do we think her new school will be the same as Jihoon’s? That would definitely make things interesting since he knows what she really is!

I love his Halmeoni! She’s so sassy!

And there she is, the new girl! Jihoon is definitely going to have some questions for her! I love that he’s basically accepted she’s a gumiho and is now just really curious about her!

I love these bits in between the story that tells you bits about the mythology! Couldn’t help but laugh that the boy tripped after stealing the stone and is the reason we only know things of the earth, how very human!

I would not want to face Miyoung’s mum! She seems very strict and quite scary!

Junu is so cocky but I love him already! I hope he plays a bigger part but do you think he sold a talisman to that dokkaebi?

After hearing his whole story, I feel so bad for Jihoon! He’s not had an easy childhood and it explains why he acts the way he does. His Halmeoni has definitely been a good influence on him and cares about him a lot but having his mother leave and then knowing that she’s so close but her new family know nothing about him must be hard!

Is anyone else really craving Korean food after all this food talk because I definitely am!

“Aren’t you supposed to look more…foxy” I died at this!! Their dynamic so far just seems to be Jihoon saying exactly what he’s thinking and then Miyoung threatening him for it with violence and I love it!

She’s really struggling with her hunger now that she doesn’t have her bead! Do we think she’ll accidentally hurt someone?

The bullies tormenting her has pushed her over the edge and now she’s smashed a window! She’s definitely not coping well and now the police are after them! I kind of love that Miyoung is a supernatural creature but as she’s part human she’s struggling with human things too, like school!

And that’s it for day 1! Wow we learned a lot of information today and so much has happened already! What do you think is going to happen now? Do you think Jihoon will take the fall for the window and what is Miyoung going to do about her bead?

I’ll see you tomorrow to find out!