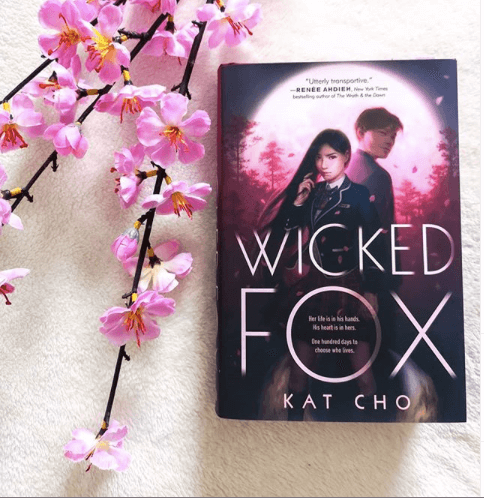 A beautiful photo by @_stephloves

Welcome back to the readalong for Wicked Fox! Its day 4!

As you might know,  every time a readalong takes place we host a bit of a hush-hush competition, to give really good chances for those participating to win! it’s really easy to enter and you can win your next box for free! After all, reading together should be rewarded 🙂

Today we’re reading chapters 40-52. Shall we see how things are getting on with Miyoung and Jihoon?

Please be warned, the following will include spoilers for chapters 1-52 of Wicked Fox by Kat Cho. Read only if you’ve finished those chapters!

Miyoung is not doing well after deciding not to feed. She keeps getting weaker but her human side is slowing down whatever is happening to her! I understand where Miyoung is coming from as she doesn’t want to feed and become a monster but then if she doesn’t feed she’ll die.

Miyoung and Jihoon shared a dream and Miyoung now knows that Halmeoni is still alive but sick! With this knowledge, she can’t stay away from Jihoon and convinces Junu to go back to Seoul with her! I knew it wouldn’t be long until she went back to help, there was no way she was just going to leave them!

I’m glad Junu is going with her! I can’t help but love sarcastic, cocky characters!

Ahh Jihoon and Junu meet at last! Jihoon definitely won’t like his overconfident personality and they will definitely clash! I just need Miyoung to go to him now! It would be so much easier if she just spoke to him instead of sneaking in to see Halmeoni! Things would get done so much faster if they worked together!

Nara is with Jihoon?? What is she doing there?

Or she wasn’t with him, she was following him to warn him that Miyoung is back!

Nara warns Miyoung that her Halmeoni still has plans to avenge her family And reminds Miyoung that it’s the full moon! How will it effect her this month? Or will it effect Jihoon now that he has her bead? Why is Nara now helping Miyoung by warning her? She basically just tried to kill her!

Jihoon is sitting on the swings in a playpark when Miyoung finds him. This was Miyoung’s chance to tell him what had happened and that she was trying to fix it and then the could’ve worked together but she’s worried that he won’t forgive her if he knows that it was her that took all of Halmeoni’s gi so she just leaves him instead 🙁

Finally she’s seen sense and is asking him for help! They’re definitely so much more capable as a team!

I probably shouldn’t love Junu and his sneaky ways as much as I do but he’s so charming its hard not to love him! Seems like Changwan does as well!

Jihoon has agreed to work together and I’m so glad!! But Miyoung only has one month until she may die! Do you think they’ll manage to save Halmeoni and get her bead back or will they have to figure something else out?

And thats us for day 4! Today was a rollercoaster and I wanted to shake both Miyoung and Jihoon multiple times to get them to understand each other!

Now that they’re working together, do you think they’re going to save Halmeoni or is it too late? What about Miyoungs bead, will Jihoon figure it out and control her? He wouldn’t, would he?