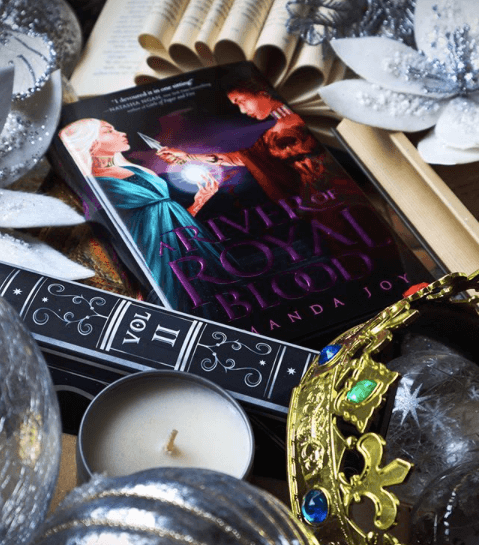 How is everyone getting on with the readalong so far? I hope you’ve been enjoying it!

Please be warned, the following will include spoilers for A River of Royal Blood by Amanda Joy Chapters 1-27! Read only if you’ve finished those pages!

They leave the camp as quickly as they can, Eva protected on all sides.

She’s even realised she has feelings for Aketo but reminds herself she can’t do anything about it as he is khimaer. That’s so sad though, that shouldn’t have to stop them 🙁

Soon enough they arrive in Asrodei and Eva’s father meets them at the gates! Eva doesn’t waste any time before asking her father what she really wants to know.

He doesn’t even try to deny that it was him that put the binding on her magick!

He tells Eva that he had to do it because of the bad omens that surrounded her birth, that her magick if left alone, could even cause her own death! How very mysterious!

Oh noooo! The only person that was able to lift her binding safely is dead! What is she going to do now?? Did the same person that is trying to kill her now also kill the Sorceryn?

Baccha has so many secrets and is blood bound to keep them. It physically hurts him to even think about saying them! I wonder what he knows that is secret enough to be hidden so well!

Oh wow! So Queen Raina used Baccha to get close enough to kill the khimaer queen and her own sister and thus began the Great War!

Omg Baccha just took a sample of her blood without asking ? well it worked out well anyway! Those bracelets sound like such a good idea and such an efficient way to get help if Eva is in trouble!

I can’t help but laugh as I imagine the two of them running around the room!

Oh wow! The power of the horns makes her super fast! That along with the blood magick could truly make her unstoppable and I am starting to see why people fear her magick so much! I really hope she doesn’t let this power go to her head!

I love that Eva and Aketo practice-fighting is just something they do now! And she’s even managing to hold her own…sometimes…but he obviously wants to talk to her about something and she keeps deflecting!

Omg he asked to kiss her!!! That escalated quickly! I really didn’t expect that to happen yet but I’m so happy it did!!

Omg I thought he was just hurt I didn’t know he was going to be dead! Nooo he still had so much to tell her!!!

How did Eva manage to kill the last assassin so quickly? And without remembering it? Was she able to use marrow magick without even thinking about it?

So someone is controlling the Dracolans to try and kill Eva and the people she loves but whyyyy?

Having to stand and watch your father burn for hours must be horrific 🙁 and especially with a family who offer her no comfort.

Could the assassin be someone working from the inside, doing whatever it takes to rile Eva up so that she will fight her very best when it comes to her nameday and beating Isadore?

Is now really the best time for Eva to be wandering around at night on her own? Surely she should at least take Falun with her? Or even Aketo! He would want to see her.

Aw yay, Aketo did come after her, along with Baccha!!

They make their way into a tavern where the barmaid tells them she saw another fae, who looked a bit like Baccha, in there recently and Eva instantly recognises the description as someone she’d seen in court before.

Aww I’m so glad Eva and Aketo managed to talk about what has been going on and had a chance to get things back to where they were. I love them together!

Baccha didn’t waste any time at all in finding Katro and binding him! But he’s not admitting to anything…

Ahhhh it was his mother’s plan!! So it technically is someone working from the inside but what is she trying to gain??

Omg has someone put a compulsion on Katro?? But surely they have to be close to do that… Or maybe not? He was obviously killed so he wouldn’t give anything away so was it his mother?

Oh no! Mirabel and the guards had been looking into it and now Eva has ruined their chances of figuring out what was going on! But they knew she wanted to look into it so why didn’t they assure her that they were 🙁

With only a couple of days before her nameday, Eva and Baccha agree to have her last lesson and we’re finally going to find out more about Baccha!

Oh wow so Raina thought she was using Baccha but Baccha was actually using Raina to try and break his oath! And he was sent there to spy on the queen and now Eva doesn’t trust him! But what about her last lesson!!

Today’s chapters really set up for tomorrow to be an amazing end to this readalong!

Before we find out what is going to happen, let me know all of your theories in the comments!

9 thoughts on “A River of Royal Blood Readalong: Day 4”