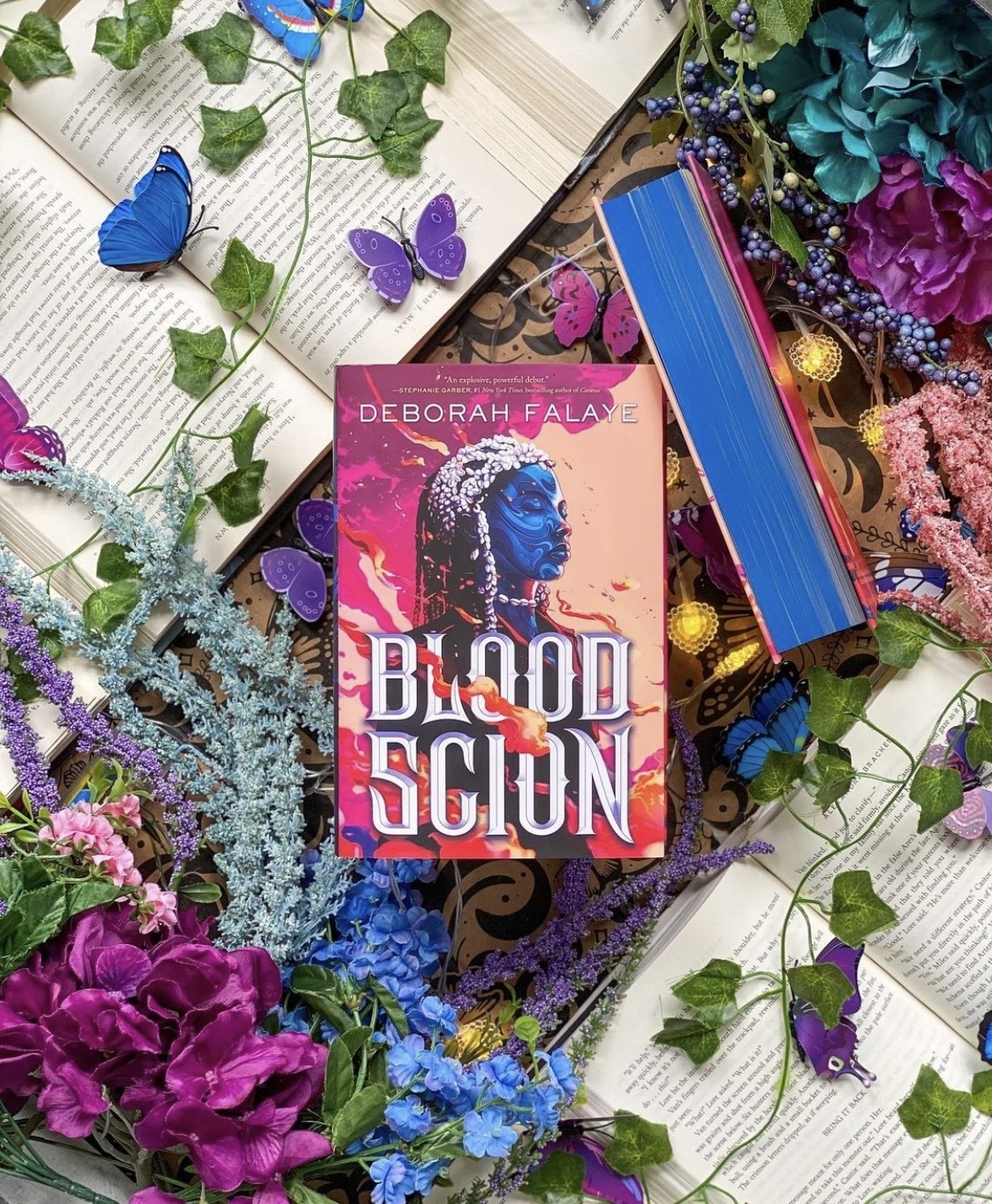 Welcome to day 2 of our readalong of Blood Scion by Deborah Falaye.

After the way yesterday’s section ended, I am nervous. Without further ado let’s get stuck in and see what happens!

Today we’re reading from chapter 9 to the end of chapter 16.

Please be warned, the following section will include spoilers for Blood Scion by Deborah Falaye, from chapters 9 to 16. Please only read on if you’ve finished this section!

It’s Teo. A hopeful part of me wanted it to be a mistake but it’s him. I’m worried Sloane won’t end up running away to the rebels after Teo ran and ended up here, caught. Sloane doesn’t even think it’s a possibility that Teo is a Scion and jumps to the assumption that the Lucis know she’s a Scion and they think Teo knew and harboured her.

She’s wrong though. He’s a Scion. It’s why he was so determined to run, better to run than be a Scion in Avalon.

This is a TEST. For Sloane to join the force she has to sacrifice a loved one. They were going to make her execute Baba but chose Teo instead. So to make it through this she has to kill either her grandfather or the boy she loves, to prove her dedication to the force. This is messed up.

Damn, I’m weeping. Teo tells Sloane to do it. That it’s either him, or BOTH of them. He says he loves her so much he’d die for her. Can Sloane really do this though?

She’s sobbing now, telling Teo she’s sorry and she loves him. Teo, also sobbing, tells Sloane he knows. And then she pulls the trigger, and he’s gone. Her love, her Teo.

Sloane recalls when her mama first disappeared, how Teo was the one who stayed by her side while Baba went to the foothills to try and track her. Teo held her firmly while she cried. And now he’s gone and by her hand. Sloane goes through the motions, thinking about how she should have let them kill her rather than sell her soul to them, to the devil. But she’s doing this for her mama. To find her mother and uncover the truth. She boards the airship and when she sits, she notices Malachi next to her. He can guess already that she had to kill Teo, Malachi says Shahid’s dead. Malachi’s best friend, the one who would pin sloan down while Malachi beat her, or stand by and watch. He says Shahid was the only one who came to help bury his parents when they died. He asks Sloane if she remembers the fire that killed them. She does, it was her doing, after all. He knows it was her. This is why he has a vendetta against her. He wants revenge. But it was an accident! He says she’s a Scion, a killer and a dead girl walking.

Before they know it, they’re landing in Avalon. Ushered from the airship and welcomed to Fort Regulus.

Good old Faas Bakker has returned to congratulate them all on murdering an innocent and making it into the force! The majority of the recruits killed, almost two hundred chose their own death over the inhumanity.

The Queen appears to tell the children about another child warrior, who was 17 when he slayed Scions and brought down ancient Yoruba kingdoms. She goes on to tell them how the youth are their deadliest weapon. She almost preys on those who lost families at a young age, celebrating the end of their misfortune and promising to feed and arm them, to protect them. Preying upon young and lonely children and promising to keep them safe to obtain an army is so messed up but given the adversity some of these children have faced it’s easy to see why they believe it all.

Olympia brings her speech to a close by telling the children Scion scum will not take their home and tells them it’s better to die for tomorrow’s freedom than live to surrender today. Sloane is right, she’s convinced 825 child soldiers their lives, and ultimately their death, is meaningful. Not Sloane though, Sloane knows better, I hope she can break free!

Sorted into Storm Squad, with Malachi in tow, unfortunately, Sloane enters the training centre. The boy from earlier, who critiqued Sloane’s ability to throw daggers and said she was sure to be broken in Avalon, stands in the middle. He’s introduced as Dane and Faas says he’s one of the force’s finest soldiers. Dane and Sloane hace locked eyes. He’s a soldier, a Scion killer and Sloane is a Scion. It can only end badly really… but why do I sense a possible love interest? Dane is responsible for training Sloane and her squad. Before Faas and his cronies leave, he drops the intel that while there are 10 recruits in their squad, he only has room for nine. He tells them a squad is only as strong as its weakest link and without further ado, walks out. Leaving the squad behind to literally battle to death. And Malachi is coming straight for Sloane.

Malachi takes Sloane down, strangling her, screaming at her to say his parents’ names. She pleads and she says them but his fingers only tighten, then he reaches for his knife. Before he can go further, Faas is back, with Caspian and Dane. A recruit has been killed and his killer is rewarded for it.

At the barracks, the squad is given rules and told what happens to deserters. Sloane cannot sleep, she thinks of Baba and Luna, and how she’ll never see them again. She thinks about how she has thirty days of training, to learn the truth about Mama. Thirty days and then she’s free. Can she make it?

Sloane gets her schedule and I. AM. CRINGING. I feel tired just looking at this schedule, honestly. Wake up at 5:30am and lights out at 9pm????? Noooo thank you. 5:30am is the MIDDLE OF THE NIGHT THELMA. Anyway it’s Sloane’s first official day as a member of the army. Caspian is taking them through shooting drills but Sloane isn’t doing so good, the lieutenant shouts at her that the objective is to HIT the targets not waste bullets and makes notes in his diary assumingly about Sloane’s inadequacy. Are they forgetting that these are literal children, untrained in combat?

Malachi goads Sloane, telling her he thinks the squad have found their newest weak link. When he threatens Sloane again she isn’t standing down this time, what’s the point since he already knows who – what – she is? She tells him it’s not a game and if he messes with fire, he’ll get burned. She immediately regrets it but what else does she have to lose? He already knows. If he wanted to rat her out he’d have done it by now, surely. He’s here for revenge. Sloane knows that, but she’s also risked too much, sacrificed too much to risk everything, she decides she has to kill Malachi.

Later, Faas shows them propaganda from the Sahl, basically trying to make them fear and hate the Scions enough to believe killing them isn’t an injustice. At mess, the children speak of myths and rumours and one boy comes forward to say Scions look normal, like any human and notes how terrifying that is. Malachi obviously takes this opportunity to freak Sloane out by standing up and agreeing they look normal, so normal that there could be one among them. Don’t rise to it Sloane!

Sloane’s off to combat training with Dane, but as she gets to the training centre she comes across two recruits from her squad speaking about tunnels? They want to steal a map of the tunnels from the lieutenant’s office but they can’t read a map… What are they up to?

Guess who can read a map though…

Sloane tries to convince Jericho and Nazanin they need her. Naturally they’re a bit suspish and want to know what’s in it for her so Sloane tells them the truth, she needs to get into the Archives Hall. Turns out Jericho and Nazanin are looking for the same thing: The Book of Records.

Her impromptu rebel meeting has made her late for training and Dane is nottt happy. He makes Sloane spar with him and he doesn’t hold back. I don’t think I like him. He tells her she doesn’t have what it takes to survive this place and a spiel about how he’s a monster and she needs to become one too and real monsters aren’t born, they’re made. Yeah, definitely not a fan.

When alarms start to blare, they think they’ve been caught and it’s all over, until they spot someone running. It’s a deserter.

He makes it so far, but there’s a leopard lingering not far from him and he hasn’t seen it and then it’s too late. Sloane watches as the leopard pounces at him.

The next day, Faas and Dane are ready to tell them of the deserter and remind them that deserting is a death sentence. Then, Faas reveals today’s mission: the recruits must traverse a chasm using a rope. No safety harnesses. If they fall, they die. They have FIVE minutes to do it and whoever finishes last forfeits their meal rations. This is BRUTAL.

Sloane is last to go and she has a really tough time getting across. When she makes it, she’s just relieved she’s alive. I would be too. Until Dane announces her time: 17 minutes and 21 seconds. Not only is Sloane last, she failed the first physical.

That was SO intense! I’m so nervous to see what will happen next.

Make sure you let me know all your thoughts in the comments and I’ll catch up with you tomorrow for day 3!