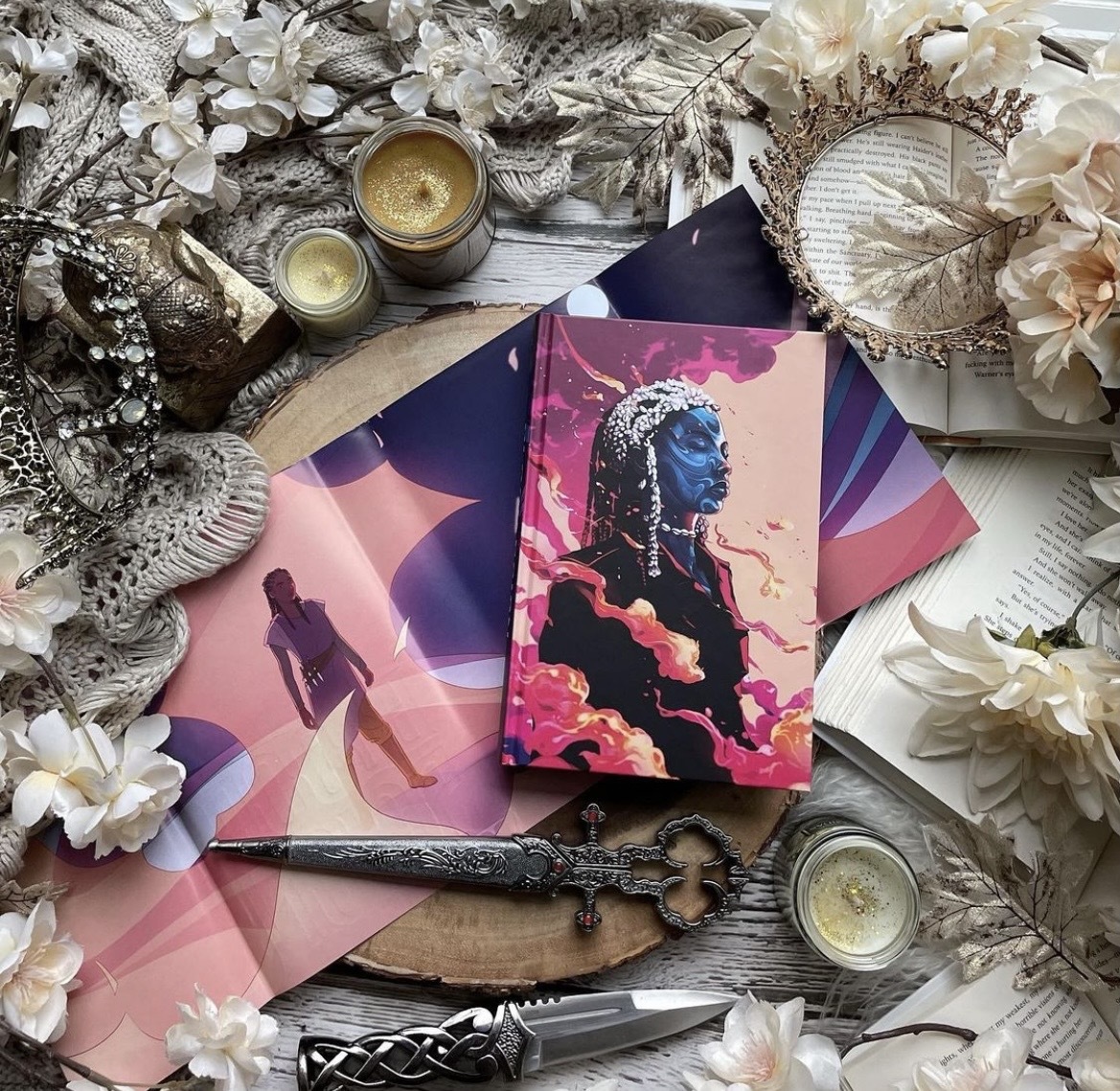 I hope that you’re all loving Blood Scion so far! It’s now day 3 and things are really getting interesting!

Today we’ll be reading from Chapter 17 to the end of Chapter 25, let’s jump in!

Please be warned, the following section will include spoilers for Blood Scion by Deborah Falaye, from chapters 17 to 25. Please only read on if you’ve finished this section!

We’re rejoining Sloane in the middle of her… less than stellar day. It only gets worse. Faas is ordering them to memorise the soldier’s creed, but it’s a ballad of a phoenix that burned through the world and laid waste to Sloane’s people. She’s struggling to repeat it and every time she fails Faas strikes her with a wooden stick. When the other recruits are on their way to mess, Faas instructs Sloane to go to the armoury. ANOTHER punishment awaits her.

Dane is there, waiting for her, and tells her that her punishment is weapons cleaning and she must report here EVERY DAY during mess until it’s finished. No food?

With a threat about how Sloane needs to “fall in line, or else” Dane is gone, leaving Sloane to it. He’s messed up though, he’s left part of his uniform and unknowingly given Sloane an easy way into the Archives Hall!

As she dons his jacket and creeps closer to the Archives Hall, things seem… strange. The security post seems abandoned, everything feels eerily quiet. Just as Sloane thinks she can make it, she hears a gut wrenching scream coming from the bath chamber, and then it just… stops. What on Earth?

Sloane can’t stand-by, knowing those screams are the product of something she’s experienced before. She enters the bathhouse and hears a guard telling someone no one can hear her. It’s the very same thing she experienced with the Nightwalker at the beginning of the book and she can’t let someone go through that. It’s Izara. Isn’t she the girl who won the trial on the very first day? The guard grabs Sloane and tells him they can both die together now… but he doesn’t know what we know, Sloane is a Scion, and this time, she’s not fighting off her àse. He realises what she is straight away and flings her away, Sloane’s not done yet though! She lets her àse coarse through her and turn the wretched guard to dust and ash. Good riddance!

Buuuut now Izara knows Sloane is a Scion? Hopefully since Sloane used her power for good, to save her, she won’t turn her in…

She tells Sloane she won’t tell… her twin sister is a Scion, descended from Yemoja! Has Sloane found another ally?

The first thing that happens the next morning is they’re all called to report to the training hall immediately… has Sloane been caught? Before Sloane and Izara really have a chance to ponder if they were caught, if the guards’ ashes were found… a TV crackles to life. A rebel group tried to assassinate the queen. They were unsuccessful, shame.

It’s a rebel group called the Blades who were recently tied to the assassination of King Conan… but no one knows about them? It’s all being hidden. Suspish.

Then, the recruits have to watch as the Blades that were caught are executed on the TV.

When it’s over, Faas and his cronies enter the room and they’re acting… strange. Do they know about the guard? I’m so on edge!

Turns out they don’t, but the recruits are going on a “Cleansing” mission and I already hate the sound of it. They travel to Eti-Osa by airship and once they arrive, Faas instructs that they’ve got intel there are five Scions on the island. They’re tasked with finding the five Scions and bringing the “scum” back to Faas alive.

Sloane has to watch, and essentially play part of the raid that sees Magda stripped from her parents and her parents shot before her eyes for trying to save her. All the while she’s thinking about how she knows and understands why they fight. She thinks:

“I’d rather die fighting than surrender only to be killed later.”

It must be so frustrating for Sloane to know this could so easily be her in Magda’s position, and know that she can do nothing to help.

After the raid on Magda’s house, Sloane stumbles upon Semi and his grandfather. Their home already raided, they somehow managed to hide from the soldiers and now Semi’s grandfather prays for Sloane to let them go. Sloane tells them she can’t but when the team leader finds her, the lies slip out. She tells him the hut’s empty and she’s certain they have Semi. When she tries to usher them away, Semi falls into some kind of daze and begins chanting. As he chants, Sloane’s vision blurs until everything is black. She wakes to the feeling of having had a hand wrapped around her neck and Semi convulsing nearby. When he comes around he tells Sloane what he said in the ancient Yoruba language and tells her Orunmila wanted her to know?

Sloane’s punishment for being a sympathiser is doled out. She’s tied up and her own squad will be responsible for giving her thirty lashes with coiled wires. I am so frightened for Sloane, not only for the lashings but because if her àse breaks free, her punishment will be so much worse.

When Sloane wakes, she’s got company. Izara sits with her and talks to her about her sister and her mama and what she knows of the Yoruba’s and the Scion’s before Nazanin arrives and Izara covers up the marks Sloane’s àse left on her. Nazanin has snuck food in for Sloane. I know Nazanin says they’re not friends… but this is a good friend if I’ve ever seen one. Nazanin and Sloane talk and Sloane realises Nazanin is planning on deserting, just like Sloane. Someone has promised to free Nazanin’s brothers if she can bring her the file of major trade routes between Lucis and the free nations. That’s why she wants to get into the Archives Hall. Sloane’s not giving up yet either!

Once Sloane is healed, Izara is ready to perform the ritual that will hopefully provide her relief from her àse. Izara shaves her head and after preparing the Iyerosun, she makes six incisions on Sloane’s head (I’m cringing at the thought of it) and dabs the Iyerosun into the incisions, chanting all the while. Sloane hears drums and Izara notifies her that it’s Shango’s drums, and it means the magic worked. Sloane feels pure and free!

Jericho, Sloane and Nazanin have their plans to break into the Archives Hall ready, all they have to do now is wait for the perfect moment. I’m scared. Back in combat, Dane eyes Sloane over, lingering on her newly shaved head and he says she looks alive. No thanks to you Dane!

They spare and when Sloane winces Dane seems concerned? Even though it was him who ordered the whipping. He tells Sloane she’s the first and only recruit to help a Scion who’s kept their life and that’s down to him. Is he expecting thanks? A medal?

Then he helps Sloane? I’m confused. He tells her what Faas has planned. Phase One of their training begins tonight (surely I’m not the only one who’s like huh? Phase One??? NOTHING they’ve done up until now has been classed as training???) and tells her to get out of the forest, you either kill or be killed. Sounds pleasant then.

Sloane immediately informs Izara, Nazanin and Jericho. Hopefully if they know they have a chance of getting through it? As Izara leaves, she reminds Sloane that tonight she’s not just the hunter, she’s also the hunted. What chance does Sloane actually have of getting through this? It sounds horrific!

After Sloane finally drifts off to sleep, she’s awoken to the sound of creaking and then suddenly, a bag is shoved over her head. Phase One is beginning.

I can’t believe we’re over halfway through! Do you have any theories? What do you think will happen next? Let me know in the comments!