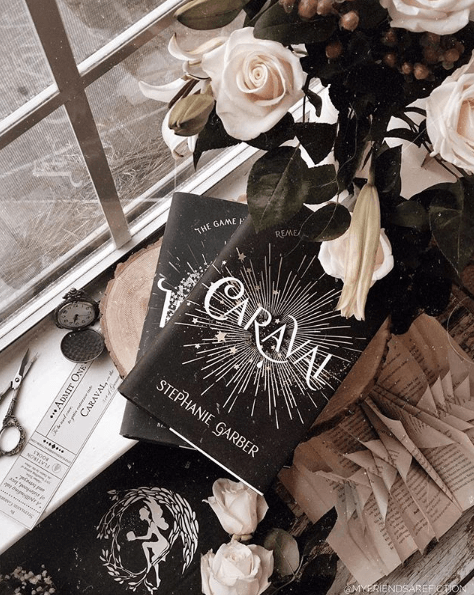 It is day 2 of the ‘Caraval’ readalong! Today I’m extra excited because, if I remember correctly, we will actually be entering Caraval itself.

Today we’re starting the Readalong by reading chapters 8 – 13, and stopping at the beginning of chapter 14.

Please be warned, the following will include spoilers for Caraval chapters 8-13 inclusively. Read only if you’ve finished those chapters!

We left off yesterday with Scarlett and Julian getting provided with some ravishing attire they find in a Clock shop along with a note from Legend.

We’re suddenly introduced to Algie, who opens a portal within a beautiful Grandfather clock and claims that it will take them straight to the heart of Caraval. I think I would take the risk if I was provided with a portal that would save me time. The lazy side of me would definitely make me want to take that route!

Julian decides not to take the portal and leaves Scarlett in the shop with Algie, rude. However, Scarlett is following him shortly after as she also decides not to take the portal when Algie states the price of using it. Scarlett would need to sell her voice to Algie for 60 minutes. She obviously regrets declining the offer when Algie opens the door to reveal the heart of Caraval and has Tella already inside. Uh oh.

Scarlett hurries off now, more determined than ever to get into Caraval and find her sister, when she runs into Julian again. When they reach the gates of Caraval, he proceeds to act like her fiance so they can get through. I love this part as we get to hear one of the announcements of Caraval, reminding them it’s only a Game. Or is it?

Scarlett and Julian step inside and take the path on the left to play Caraval.

We find out now that Julian definitely does have his secrets. He’s played this game before. Which is why he was so confident with how to approach that girl at the gate. Suspicious…Suspicious…

Scarlett seems truly conflicted about whether she should trust him or not before going into the game, but she decides to go ahead with him despite her better judgment.

Julian and Scarlett find their way onto a Balcony, finding themselves looking down on a miniature kingdom. Julian explains that the house is more like a big theatre than anything else an d they are just watching from above. Which is pretty darn cool! I absolutely adore Garber’s imagination and descriptions right from the beginning of Caraval Eve.

They are interrupted by a stranger named Rupert who explains the rules again more thoroughly and requests blood to be drawn before they can enter the Game. Rupert informs them of the reverse day and night rule. Caraval is only active at night, and everything closes right at sunrise. This causes Julian to rush Scarlet to their rooms in The Glass Serpent / the Serpiente. They arrive just as sunrise hits and Julian pushes Scarlett inside first before the door shuts firmly between them, locking him out!

I remember being so damn worried for Julian when this happened. His mysterious character had already grown on me so much and I was genuinely worried that he wouldn’t get inside.

Thankfully, Scarlett manages to convince the innkeeper to let him in and provides them with directions to their room, which they soon realise, is the same room. What a sneaky innkeeper. Scarlett declares that if Julian intends on sleeping in the same room and the same bed, then she will claim the hallway as her bedroom. Julian stops her short when he announces that he’s found the first clue. A key to Tella’s room!

Scarlett goes to the room, and realises that Tella is just inside with a man. I wonder who it could be?! And, why is Tella so adamant that Scarlett should stay outside?

Scarlett listens to her sister and falls asleep at the end of the hallway, only to be awoken by a man with tattoos and his sister. I know who this is…

I completely forgot this character was introduced quite early in ‘Caraval‘ so I’m delighted to be reunited with him again so quickly. These characters are Dante and Valentina. Dante is nice enough o offer his room to Scarlett and even invites her for dinner the next night. She refuses due to her ruse with Julian, it would be suspicious if she began dining with another man.

I found it absolutely hilarious when Scarlett went to Dante’s room and discovered that the magical dress she acquired earlier that night in the clock shop, had turned into a lacy nightgown. One that would have for sure attracted Dante’s attention! What an awfully mischievous dress.

When Scarlett wakes in the morning, she discovers her sister’s room ransacked and torn apart, when she’s joined by two more people who seem to have the same key that Julian gave Scarlett as their first clue. I bet her room was ransacked by all the other players!

The man who comes into Tella’s room steals a precious pair of her earrings and whilst Scarlett chases him, the pregnant woman makes off with the rest of her things. I would be sooo furious. Julian finds Scarlett and he provides her with the second part of the first clue, which basically declares Tella as part of the Game and leaves Scarlett with no choice but to form a partnership with Julian and decide to win Caraval.

We are now in Caraval, the games have begun and the clues have started to be found. As this is a re-read for me, I’m actually finding myself pick up little things that I didn’t before. I’d love to know if you guys have noticed anything you missed before too. Or, if this is your first time reading, tell me what you think of Caraval so far!

We will be back tomorrow and will be reading chapters 14 – 19.