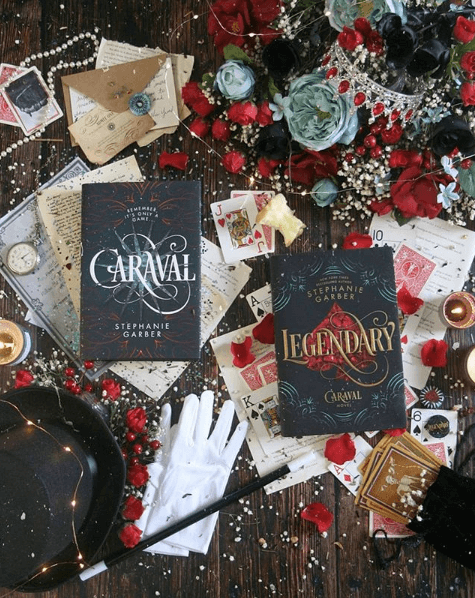 Today is day 4 of the ‘Caraval’ readalong! I’m stressed out (in the best way) from yesterday’s chapters. so much happened and we left on a bit of a cliffhanger.

For today’s Readalong we’re reading chapters 20 – 27, and stopping at the beginning of chapter 28.

Let’s continue with our Caraval adventure, shall we?

Please be warned, the following will include spoilers for Caraval chapters 20-27 inclusively. Read only if you’ve finished those chapters!

Yesterday, we left off with Scarlett dying. Yes, you read that right. Our protagonist is currently dying. But, it’s only for two days though. It’s fine guys, don’t panic. *Proceeds to panic anyway*

Scarlett runs into a rather desperate Dante on the way back to her room. He tells her that his sister is missing and before he can get another word out, Julian has punched him and went to Scarlett, worrying over her. Which makes my heart swoooon! Does anyone else notice here that he uses her actual name? Aw, Julian.

I swear I almost squealed when Julian decided to give her a day of his life, A rather intimate gesture, don’t you think? But, I love it. This whole scene, I swear my heart was in my throat and I couldn’t stop reading.

Whilst Scarlett is essentially dead, but dreaming, she sees her grandparents. Her grandfather calls her Grandmother Annalise, which just so happens to be the name of the woman Legend was apparently in love with!

They talk of a man who won the last games only to find his fiancee in bed with Legend afterwards. She broke off their engagement, claiming to be in love with Legend, but then tossed herself from a window when Legend didn’t return her feelings. Scarlett was witnessing her funeral and she spots Dante following the procession as the girl’s fiancee. She turns when Dante walks off in the direction of Legend. But when Scarlett looks, she sees Julian! Dun, dun, DUUUN!

When Scarlett wakes, she tries to get away, she thinks Julian is Legend now, or that he is more closely related to Caraval than he led her to believe. When she darts into the hall, she sees her father. The man she fears the most, before darting back into the room as Julian awakens. Despite her best efforts to act calm, Julian is hurt when she pulls away.

What would you guys do in this situation? I can be quite impatient, so I feel like I would outright accuse him of being Legend.

Scarlett follows the staircase and the footsteps which we can only assume to be Julian’s. She stumbles across a hand and when she looks up, she finds Dante’s dead body, and Julian standing over it. Dante! Noooooooo!

As Scarlett tries to run off, Julian catches her and explains that he and Dante were working together. Le’Gasp! He tells Scarlett that Rosa was his sister and Dante’s fiancee after she accuses him of being Legend. Scarlett believes him. For those of you who are reading for the first time, I’d love to know if you think he’s telling the truth or not?

After escaping the tunnels, Julian explains that he knew Scarlett would get a ticket as Legend planned to doom all Annalise’s heirs and marriages due to his heartbreak over her, so he knew once Scarlett was engaged, Legend would send an invite. That’s some careful planning there, Julian. You’re indeed a cunning one. He also tells her that he knew one of them would be kidnapped as part of Legend’s game. I remember being so conflicted about whether to believe Julian or not. Garber does such an amazing job of making her characters mysterious and deceiving.

Scarlett’s second dress is delivered and the card is signed by Tella, at least that’s who we think it’s signed by. I’m bloody glad she got that dress! a day off her life, and Julian’s for it? Better be worth it. Julian allows Scarlett to follow her theory about this being a clue when they run into a man in a top hat. He kisses Scarlett’s hand after she accuses him of being Legend. Honestly, anyone could be Legend at this point.

Julian isn’t happy in the slightest about the hand kissing gesture, especially when the man reveals himself as Scarlett’s fiance!

This is quite the little cliffhanger to leave off on. I genuinely forgot that Scarlett’s fiance made an appearance. Ah, the beauty of re-reading your favourite books! I’m also heartbroken for Dante. This is not okay.

We will be back tomorrow and will be reading chapters 28-35.