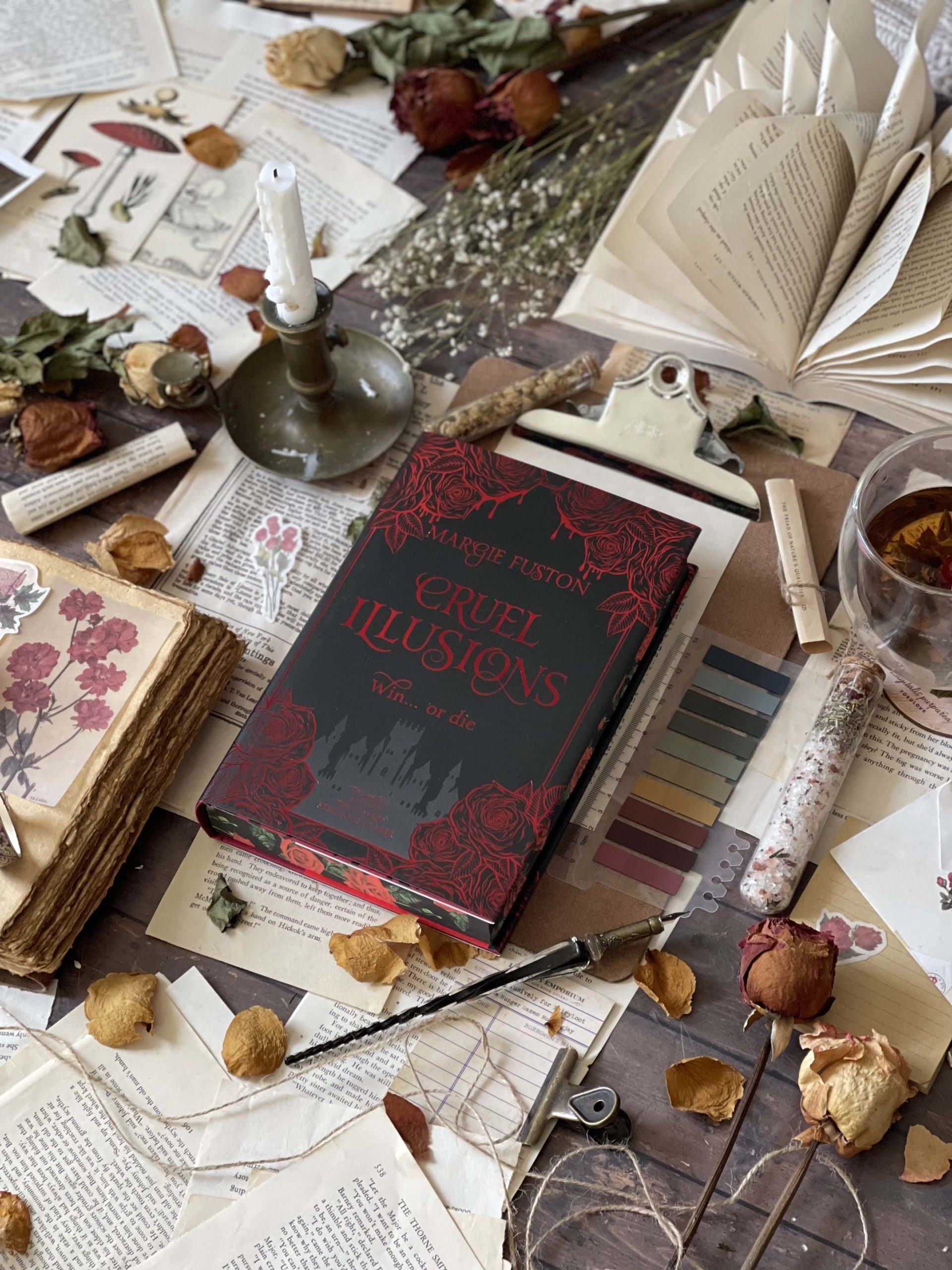 Happy Monday and welcome to day 1 of our readalong of Cruel Illusions by Margie Fuston. I’m so excited to be reading this one with you, I hope you all love it!

Since today is day 1, we’ll be reading from the beginning to the end of Chapter 6. Get comfy and let’s get started!

Please be warned, the following section will include spoilers for Cruel Illusions by Margie Fuston from the beginning to Chapter 6. Please only read on if you have finished this section!

Ava is living in a foster home after her parents died with her younger brother, foster brother and Deb, her foster parent. Parker seems to be fitting in with Jacob and Deb really well and Ava seems a little sad about it. Ava ends her night by heading out into the dark, wooden stake at the ready, vampires are real and one of them killed her mother. Dun dun dunnnn!

During her explorations, she stumbles into a magic show. She’s enthralled, I am too! When a new green haired magician comes on stage, Ava finds herself raising her hand to be a volunteer and ends up on stage with the handsome magician. She thinks it’s all sleight of hand, like the magic she performs, but suddenly it seems impossible. She returns to her seat and decides she can’t stay any longer.

Back outside, she performs her own sleight of hand coin trick again to settle her nerves but it doesn’t work like it usually does. It’s like she has actual magic that even she doesn’t understand.

The green-haired boy is outside, and caught it all. When she tries to leave, he calls her name… but she never gave it to him. Oh this is getting spooky! His name is Xander. He tells her his show is more than just a show and tells her to come back tomorrow.

On her way home, lost in her thoughts, she bumps into another male. He saw the trick too… And tells her not to come back here. What has she walked into? No level of research leads her to any kind of epiphany or explanation of the magic Xander seems capable of.

The next morning, Ava feels left out all over again when she finds out Parker has dropped their birthday tradition and Deb is hosting a birthday party for him. Can’t blame him though, I really feel for Ava but it sounds like Parker’s birthday tradition was more for her than it was for him. He asks if she’ll perform for his friends though, and she says yes.

That evening, Ava returns to the magic show, with her friend Stacie this time. Stacie, thinking she’s doing Ava a favour, sees Ava watching Xander and fakes that she has to leave. Ava tells Xander she’s leaving, but instead sneaks in and gives herself an inside look at the magic on stage. And it’s exactly that, magic, no illusions, no flowers being dropped or quick changes but actual magic emanating from the twins on stage.

In her spying, Ava overhears Xander and someone else talking about her. She’s saying they need Ava, it’s their only move… this is suspicious. Unfortunately, at the worst possible time Ava puts too much pressure on the boxes in front of her and tumbles out, landing in front of the two. They tell her magic is real, they feed off the energy of the crowd. They want her to join their troupe as an apprentice… and it turns out they’re also vampire hunters. Original vampires were magicians gone bad. The magic and being part of the troupe gives Xander immortality. Ava can only get the wristband when another magician dies though, every other troupe will take on an apprentice and the apprentices will fight for the chance of obtaining a wristband. Ava agrees on the condition that Xander performs at Parker’s birthday party.

In an odd turn of events, Ava bumps into the other person who commented on her magic trick last night and he’s not alone. Willow is Roman’s apprentice, they go for ice cream and Willow and Ava agree they’ll be friends for now, despite also being competitors.

Would you have agreed to join Xanders troupe?
Do you think it’s a good idea for Willow and Ava to be friends?
Any theories on what’s going to happen?

What an interesting start!

Hope you’re enjoying the book so far! See you tomorrow for day two.