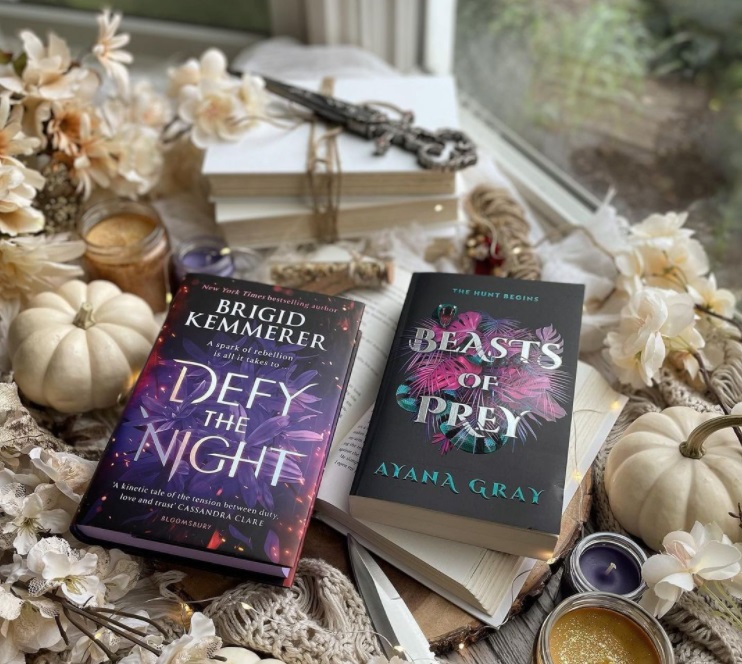 It’s our final day in Kandala, and things are only going to get more action-packed from here. We’ve had deception, romance and heartache. It’s time to find out how this book ends! Who’s excited?

Today, we’re reading from chapter 33 until the end.

Please be warned, the following section will include spoilers for Defy the Night by Brigid Kemmerer from chapter 33 onwards. Please only read on if you have finished this book!

Corrick and Tessa are in prison. They’re being kept separate, with no food or water. Harristan visits Corrick and sends for food and chairs. Corrick promises that he hasn’t betrayed Harristan, but his brother was so angry that he wanted Corrick to stay in prison for a while. Corrick tells him that Harristan can’t release him until they find out who the benefactors are or it will be seen as a sign of weakness. How long will Corrick stay in prison?

Harristan frees Tessa and takes her back to the palace, where he asks Tessa for the whole truth. She’ll only tell him if Quint is there. Together, they tell Harristan the truth about Corrick and Tessa’s history. Harristan is taken back by Tessa’s blunt honesty as she tells him that everything Corrick risked, he did so to protect his king.

Allisander mocks Corrick in prison, and Corrick punches him. Angered, Allisander swears that he’s going to rise up and take control, and get his brother off the throne. While in prison, Corrick arrests Allisander and has Rocco place him in prison. Rocco takes Corrick to Harristan, where he walks in on Tessa, Quint and Harristan. Who guessed that Allisander would be the villain?

Harristan coughs and Tessa realises that the moonflower petals are different. She wonders if the supply has been tampered with. Did anyone else suspect this? Before anyone can act, there’s a huge explosion!

Chaos erupts. The Royal Sector is on fire. Everyone is trying to find the King, and they all rush to Corrick’s quarters. On the way, Quint is struck by an arrow. They’re going to use a hook and rope to escape out the window. One of the guards, Thorin goes first, followed by Harristan, Quint and Tessa. Rocco and Corrick are left and Corrick tells him to leave, he’s too weak to climb down. The rebels burst in, but Rocco comes back for Corrick, and they escape the palace.

Corrick is struggling to hold on, but Harristan helps him walk. They hide in the workshop Wes and Tessa used to use, and Corrick falls asleep. Harristan helps Quint with his wounds. Does anyone else love Quint and Harristan’s friendship?

Harristan asks Tessa for help to try and resolve the crisis his Kingdom is facing. Tessa asks for amnesty for the people in exchange for her help, as well as offering Corrick freedom and her own job and place to stay. They leave to face the rebels.

Corrick wakes, alone with Quint, who tells him that Tessa and Harristan are away to negotiate with rebels. They rush after them, heading to the hold to interrogate Allisander. Rocco breaks his fingers until Allisander tells Corrick who betrayed the King. Allisander was orchestrating fake attacks on his supply run so that he could increase his prices. He says that they weren’t supposed to set the palace on fire. Corrick ties Allisander to a horse and leads him to the rebels.

Facing the rebels, everyone begins to chant “kill the king” the situation is getting really out of hand. Who’s on the edge of their seat?

Harristan tells them that he can’t promise them medicine, and so they don’t see the point in returning home if they have no cures. Corrick arrives with Allisander, who tells the rebels that if they surrender, they can have eight weeks worth of cures until they can get a new system in place. Will peace remain for that long?

The rebels don’t trust them, but they all share stories of times when Tessa has helped them and so they surrender.

Tessa is given a new room and selected to be the people’s advisor. Corrick rests for days, and finally meets with Harristan who tells him that he no longer wants Corrick to be king’s justice, he wants to run his kingdom differently now. There’s a lot of work do to maintain peace in Kandala, but things are looking a little brighter. What could happen next?

Thank you so much for joining me in this readalong, I really loved this book and I hope you enjoyed it too! Let me know your final thoughts and I’ll catch up with you in the comments.