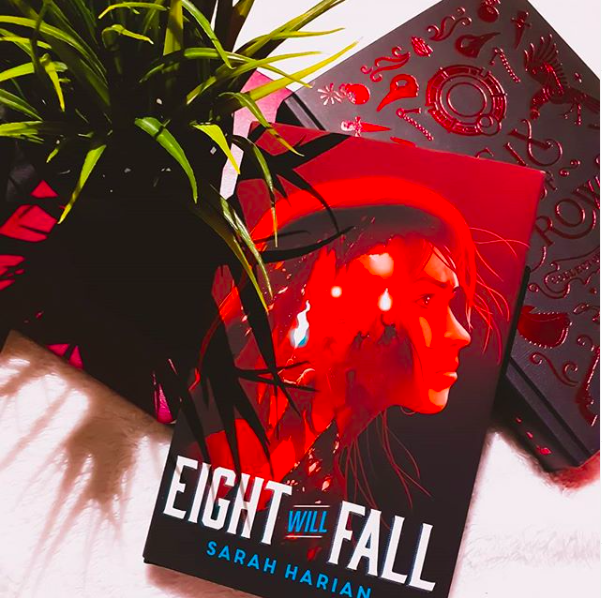 It’s day 3 of our readalong! We are in for a treat with today’s section and I can’t wait to dive in!

With that said, lets dive in to today chapters! Today we’re reading Chapters 15-21!

Please be warned, the following will include spoilers for Eight Will Fall by Sarah Harian Chapters 1-21! if you’ve finished those Chapters!

I’m glad Larkin and Amias could have that wee moment so Larkin could understand what he is doing this for and what he is fighting for. He just wants to get home like everybody else.

Oh god, someone peeled Brielle’s skin?? And she said that he has followed them! Who could it be? And now their path is blocked! Their choices are use destruction magic and risk bringing down the cave or go back to where the thing that hurt Brielle is…I don’t really like either option! What would you choose?

They decide to press forward through the crawl space even though most of them are terrified of small spaces! Poor Elf is not having a great time 🙁

Ahhhh something has grabbed on to Larkin’s leg and is trying to pull her away from the group! Luckily, she manages to get free and gets through the crawl space to where the others are!

Omg, so Kyran is alive! And it is him that is hunting them!!!

Is he able to hurt Brielle without touching her? And how is he talking to her? If it is him then its said he is an immortal god so I guess he can do anything!

They don’t get far before Casseem collapses!! They’re all really having a hard time!

They decide they should stop for a while and rest but I have no idea how they can feel safe when they think Kyran is watching and following them.

Oh no, Brielle! Do you think she’s being the one picked on because she’s essentially the weakest of the group? I hope she’s okay 🙁

Oh my god, the missing soldiers! Or what’s left of them :/

Nooooo Brielle 🙁 she just wanted to find her sister, I’m so sad!

So everything that’s happened has been set up to lead them to where Kyran wants them to go! He’s been leading them and using death to do it…

They’ve found a pool of clear water but the happiness of that doesn’t last long as a man dressed in black stands before them. The man gestures for them to move forward and Larkin does??? Whyyy do they keep following creepy things! I would be running in the opposite direction!

They shackle themselves and allow themselves to be led into the Empaths village. Could these be the miners that were stuck here when Kyran was banished? Or are they Kyran’s disciples?

Ahh, so they think the woman is one of Kyran’s disciples!! What would she want from them?

Whaaaat! So the disciples now each have their own sector of the Reach were they lead their own people and never cross sectors! They’re just casually living their lives underground, but what happened to start this and why are they estranged from Kyran?

Who would you agree with? I feel like it’s a good idea to try and find out what they can from Bianca before wandering off blindly again considering their map isn’t helping much!

Ohhh so Bianca has been using the dead to keep them alive all this time! Recreating their hearts!

OMG ! The group are all descendants of Kyran’s disciples! Which means one of them is Bianca’s child! A few of you guessed this yesterday so well done if you got this right!

You would think this revelation would maybe bring them together but it’s actually divided them more since some don’t believe it’s true!

Oooo Larkin thinks she’s a descendant of Bianca! Do you think Amias is Kyran’s descendant?

Ahhh they have a map which shows the different sectors of the Reach and it could lead them, straight to Kyran!

Oh no, the entire village has been attacked!!! Are there any survivors??

Omg Bianca noooo 🙁 she helped them and Kyran killed her for it.

Wow! That was an eventful section! I can’t believe they are all descendants of the disciples! Do you think you know which one belongs to which disciple?

Let me know and I will see you tomorrow!