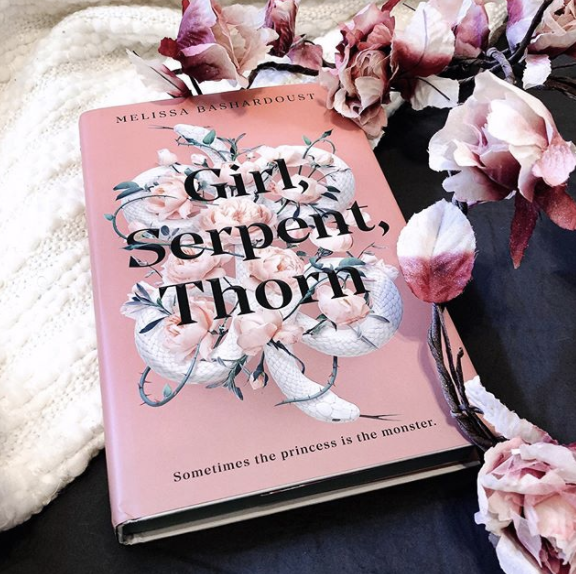 Welcome to day four, I hope you’re enjoying the readalong so far! Only today and tomorrow left now, we’re almost at the finish line! I for one have been on the edge of my seat for most of this book and I expect it’s not going to slow down anytime soon! Who’s ready to jump back into this fairytale?

Please be warned, the following will include spoilers for Girl, Serpent, Thorn by Melissa Bashardoust Chapters 0-24! Read only if you’ve finished those chapters!

We re-join Soraya making her escape through the tunnels with Parvaneh. Soraya is grappling with the fact that she lied to her but if she admits that she no longer has the feather, would Parvaneh still help her?

Yes! They find the pariks and free them from their cages. How cool, they all have different types of wings! Oooh one of them asks how she knows Soraya, is this Parisa?

Ah awkward… she has to admit she doesn’t have the feather which in turn means Parvaneh hasn’t met the conditions of her return. But why was she cast out in the first place?

Soraya has a new plan! She will pretend that she wants to join the Shahmar in hopes he’ll keep her close enough to learn his secrets. When she finds the feather she will give it to Parvaneh— but only to Parvaneh.

It turns out that Parisa is the div that Tahmineh freed and the one who placed the curse on Soraya all those years ago! YESSS if Soraya brings them the feather the pariks will stand with her and the humans against the Shamar!

Soraya basically admits to her that she misses her curse, her poison. Oh my heart goes out to her,  she is filled with regret and must get that feather back if she is to put things right.

Parvaneh is right though! Azad gave her a reason to trust him and then he abused that trust, she should be angry with him not herself! I like Parvaneh, she seems wise.

We have such a lovely moment with all the moths, Soraya can simply enjoy the absence of her curse without guilt or complication. Ooh what’s this, Soraya feels a fluttering in her stomach as Parvaneh approaches her.

“I always thought you…I thought they were beautiful.”

“Even after everything she had seen—demons and sorcerers and curses—there was nothing more astonishing or magical to Soraya than being able to touch Parvaneh.” Excuse me whilst my heart explodes.

The tables have turned Azad, Soraya is about to play you!

Oooh he admits he planted Paravaneh in the dungeon and he is suspicious that Soraya let her free. She’s thankfully able to convince him she didn’t, for now.

He leads her to a room filled with relics of the past all illustrated with images of Azad, before his transformation. Bit vain no?

He’s telling her they are the same, Azad the prince and her the poisonous princess, both betrayed their families. He was his family’s shame too. We learn of his family and how an astrologist told his father that if he ever ruled, dire consequences would follow. So the astrologist was bang on the money then..

So was he manipulated by the div he caught into killing his father? And the same div convinced him to bathe in the blood from a div’s heart to become more powerful. The same way Soraya was cursed! He claims he didn’t realise this would cause him to transform. Do we believe this version of his story?

It seemed as if Soraya was going to be drawn back in by him for a second there! Up until he tells her he bathes in human blood to look human, which only works temporarily…

I had wondered if he would use the feather to transform himself human again but as the Shahamar he has power, as a human he would be vulnerable.

Wait the div who manipulated him was Parvaneh!

It all makes sense now! Why Azad hunted down and captured pariks and why the other pariks shunned her!

Catch me praying Soraya will confront Parvaneh and not put it off like she did with her mother..

So Soraya forgets Azad’s revelation and her feelings of betrayal as Parvaneh had returned to Golvahar for her and brought her back a sprig of hyacinth, a reminder of her home. She endangered herself and her freedom for Soraya and now we have kissing people!!

The kiss is cut short though when she remembers the violence that Parvaneh had done. Oop confrontation time!

Aah okay, so he had her captured and she sought out his weaknesses, his insecurities to try and make him destroy himself. She didn’t know he would kill his family! Or that his transformation would be so complete.

Okay I’m thinking we can trust her! She did try to stop Soraya from taking the simorgh’s feather. She couldn’t do the same thing to Soraya that she did to Azad, even if it meant being his prisoner forever.

Soraya isn’t ready to forgive her though, similarly as Soroush couldn’t forgive her for her betrayal.

So the Shahmar organises a banquet, pulling out all the stops it seems to win her over. The divs bow to her like she’s their queen but they still try to hurt her? Is this how they show affection or respect? I’m so confused.

Oh wow Ramin is alive? Didn’t she see him die? I suspect he just wants to see if she still feels the rage towards him like she did before, is this a test?

If she can somehow convince him that he can trust her, then maybe they can work together to find the feather! Ah maybe not…she tries to convince him she’s a prisoner there too but his hatred for her is too strong!

Oooh it is pretty satisfying to see her stand up to him. But in reality he always been scared of her power but didn’t show it, he was scared for his sister above everything! She had his motivations wrong this whole time. He thought he was protecting his family from a demon in their midst that only he could recognize.

The Shahmar won’t let her free him but she requests to have him returned to Golvahar unharmed, I don’t know if I believe he will do that..

Oh damn!! He want Soraya to be the one to kill her brother!

Surely she won’t believe him when he says Soraya is reminding him what it is to be human again. He literally just asked her to execute her twin…

He says once she kills him that she’ll truly be free and she will rule by his side as his Queen. Yeah she ain’t gonna fall for your manipulation again dude

Oh how kind of him! He understands that she might not be able to kill her brother so he will happily step in and do it for her, so sweet this guy honestly!

Oh god she’s not considering this is she?

Thankfully thinking of Parvaneh has her coming back to her senses, everything he’s done to hurt her family and the parkis too

Noooo she just gave the game away, he knows she’s been sneaking out to the forest and that she has seen the pariks! Lie faster Soraya!

Ahh man she admits Parvaneh helped her and that she freed the other parkis too! Oh no she’s going to give him Parvaneh to gain back his trust, what is he kills her?

And…. he has her, Parvaneh is obviously feeling betrayed saying they deserve one another. Oh boy just when these two had a thing going…

“You finally found someone as wretched and despicable as you are. I would keep her close if I were you.”

Well at least she’s gained the Shahmar’s trust I guess? All hope seems lost but then Parisa shows up and confirms Parvaneh is still alive, phew! And she gives her some of Parvaneh’s hair which if burnt will allow Soraya to communicate with her.

Oooh okay so she may be able to communicate with Parvaneh but will she forgive Soraya’s betrayal? Surely she can if she knows it was to save her family, Parvaneh would do the same for her sisters, no?

Soraya has lost all hope, resigned to believe that her anger has twisted her into something as terrible and violent as the Shahmar ?

Yes! Parisa coming through with the motivational speech Soraya needs to hear! She needs to use the rage she feels against him, get the feather, save the kingdom and her family!!!!

The stakes are so high right now and I cannot wait to hear what you guys have to say about today’s section!