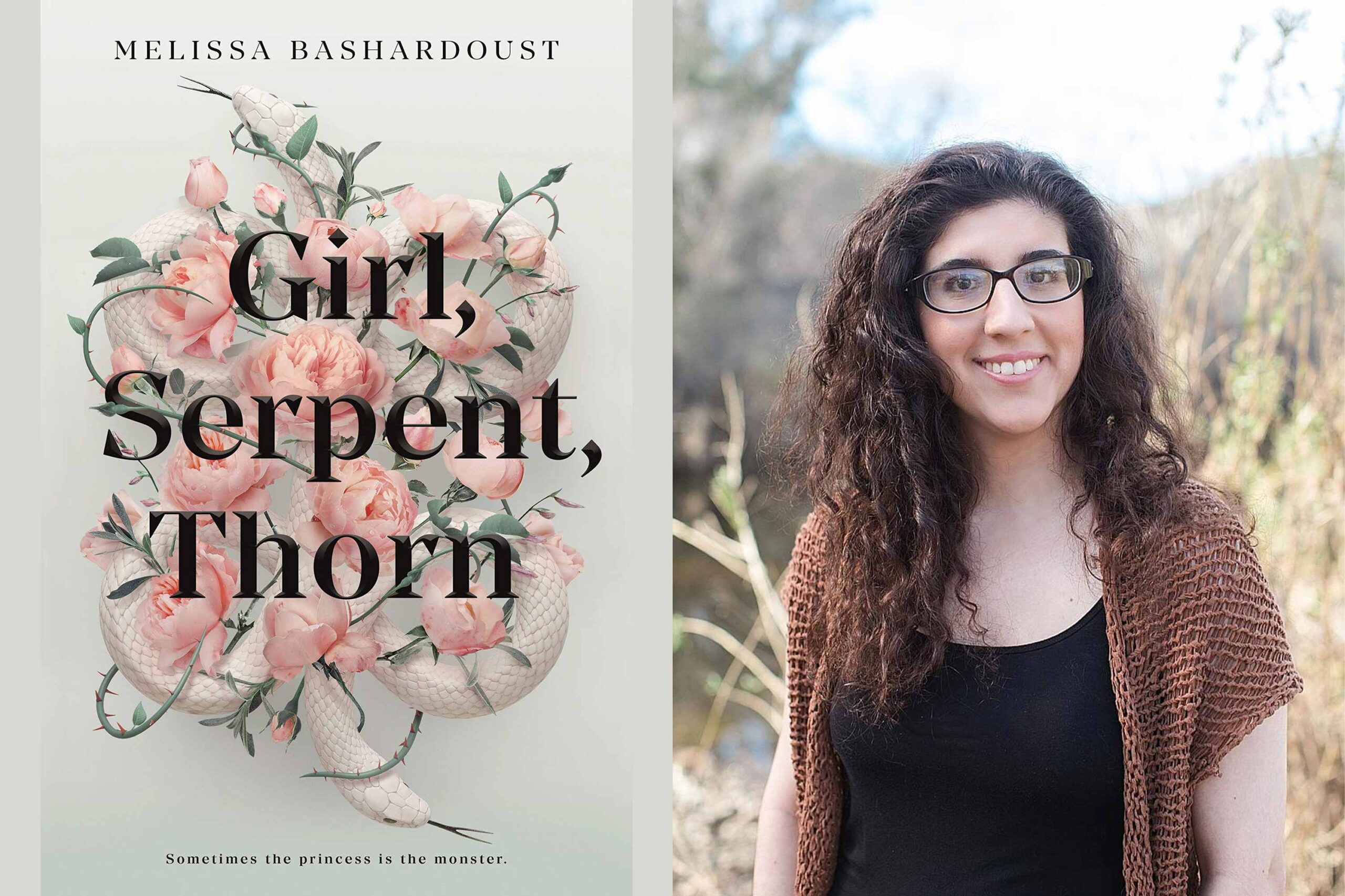 ABOUT MELISSA BASHARDOUST
Melissa Bashardoust (pronounced BASH-ar-doost) received her degree in English from the University of California, Berkeley, where she rediscovered her love for creative writing, children’s literature, and fairy tales and their retellings. She currently lives in Southern California with a cat named Alice and more copies of Jane Eyre than she probably needs.

What inspired you to write GIRL, SERPENT, THORN?

There were two major inspirations for GIRL, SERPENT, THORN. First, I’d been playing around with the idea of a Sleeping Beauty retelling, particularly with the ways it reminded me of the short story “Rappaccini’s Daughter.” There was a similarity there that interested me—Rappaccini’s daughter is a girl raised to be poisonous, surrounded by a poisonous garden, while Sleeping Beauty is a seemingly helpless princess who is surrounded by deadly thorns and briars. In both cases, I was fascinated with the idea of a girl who seemed powerless or passive but who was dangerous in a way that wasn’t immediately apparent. I wanted to look at the way that kind of existence could be isolating but also inherently powerful in the sense of having this protection against the world’s dangers. Second, I’d started reading about Persian myth and folklore a few years earlier when wanting to dig into the mythical tradition of my own culture. While figuring out where to set my Sleeping Beauty story, I was struck by the parallels between the good fairy/bad fairy dichotomy in Sleeping Beauty and a similar demon/fairy contrast in Persian folklore. I realized I wanted to set the story in a mythical version of Ancient Persia and so I began thinking of other ways I could tell a kind of fairy tale using touchstones and motifs from Persian folklore and myth. And from that combination came GIRL, SERPENT, THORN!

Did you have to do any special research for GIRL, SERPENT, THORN?

Oh, definitely. Even though the novel is set in a fantasy world with magical elements, I wanted to ground it in the history, myth, and culture of Ancient Persia, specifically the Sassanian period and the beliefs of that time. I also went back to the stories in the Persian epic the Shahnameh since I wanted this book to feel like it could take place in that world with its demons and magical birds. I played around with this mix of history and myth to create a fantasy world that had its own rules and backstory that were reminiscent of, but not necessarily identical to, what I had researched…kind of like Ancient Persia: the Remix.

Shveta Thakrar, author of the upcoming STAR DAUGHTER, very kindly blurbed the novel by calling it “a tale a rose might tell,” and I’m obsessed with that description. That’s 6 words, so I’m cheating, but it’s just too perfect.

Ooh, some of my favorite earlier scenes to write were Soraya’s first encounters with the div in the dungeon. Those scenes were a lot of fun because I love writing that kind of semi-antagonistic one-on-one exchange where both characters want something from the other but are being difficult about it. I also have a fondness for writing scenes in claustrophobic or subterranean spaces because people’s secrets want to slip out more naturally in these spaces that seem so removed from the regular world.

I don’t have any particular snacks I reach for when writing, but I do drink a lot of peppermint tea.

This book really tested my plotting abilities, because there were a lot of pieces that came together in a really specific way, and if I changed any one plot point, I had to adjust a bunch of other ones too. There are also a lot of secret agendas I needed to make sure were consistent with the characters’ choices. It was especially challenging putting all those pieces together without straying too far from the world and the mythology I was borrowing from so that even the magical elements would feel cohesive and rooted in this world.

What can you tell us about the next book you are writing?

I’m going to be mysterious about this and say I’ve got a couple of ideas I’ve been playing around with, but I’m not ready to talk about them yet! But I can tell you that I have a short story based on “The Winter’s Tale” coming out next year in the Shakespeare-inspired anthology THAT WAY MADNESS LIES.