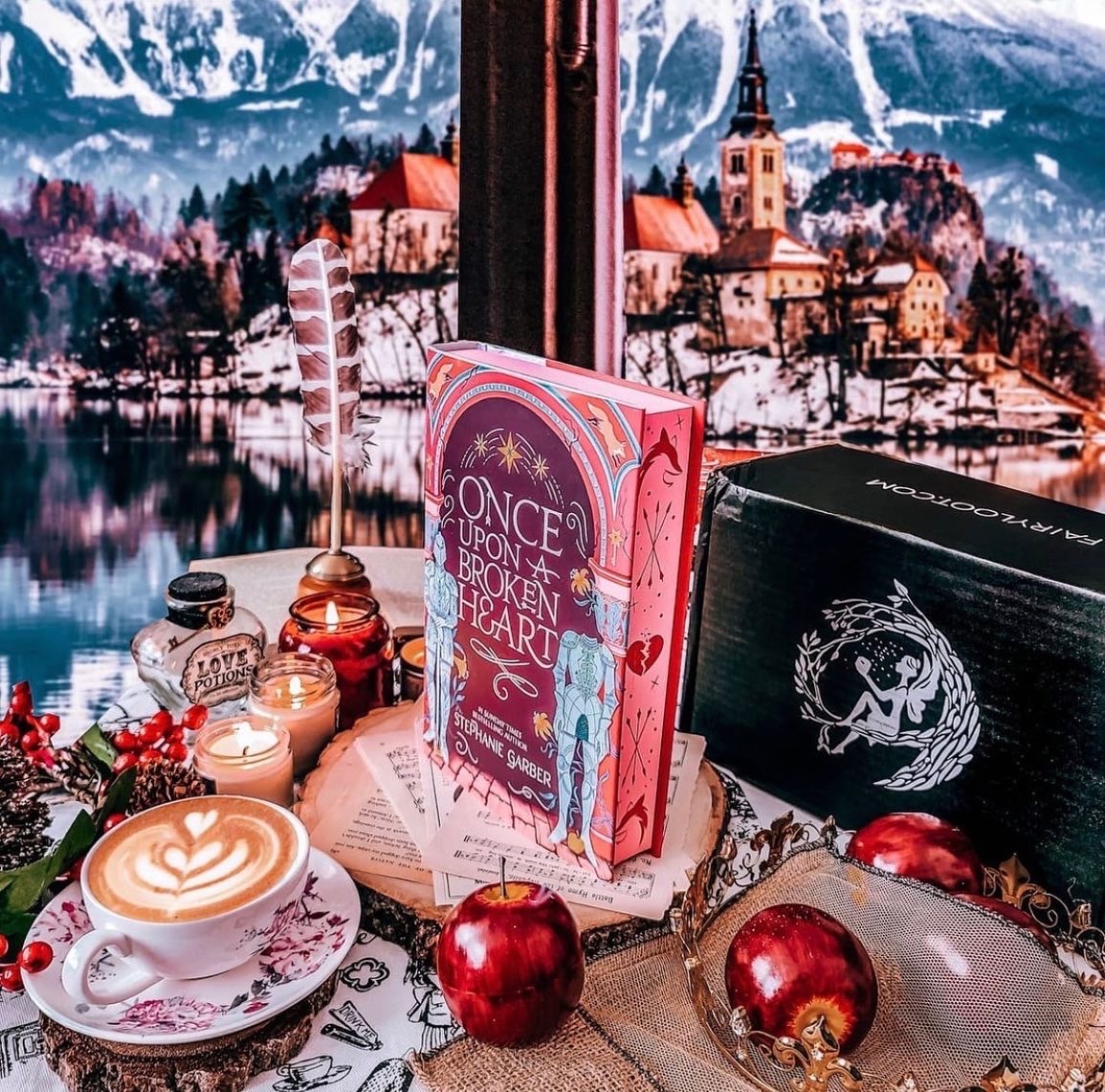 We’ve made it to the final day of this month’s readalong! I hope everyone has enjoyed it! I, for one, have loved this gorgeous book and I’ve thoroughly enjoyed reading all of your comments too!

But I’m sure we’re all eager to get into the final section and boy am I excited to find out what’s going to happen!

Please be warned, the following section will include spoilers for Once Upon A Broken Heart by Stephanie Garber. Please only read on if you’ve finished the book!

We begin this section in the predicament we left off from yesterday: Jacks has been bitten by a vampire (who just happened to be Luc, the boy Evangeline’s been in love with) and Evangeline has to keep him distracted inside the mausoleum he’s locked inside or he could break out and drink her blood!

To distract Jacks, Evangeline asks him about Donatella, the princess of the Meridian Empire (and one of the protagonists in Stephanie’s Caraval series). We learn about what transpired between Jacks and the princess and I don’t know about you guys, but I definitely feel like I’m beginning to understand why Jacks is the way he is. In exchange, Evangeline tells Jacks about Luc and how she fell in love with him, though Jacks counters that Luc never loved Evangeline because he wasn’t strong or determined enough to break the curse Marisol put on him. Irritated, Evangeline snaps at Jacks telling him that she’s beginning to understand why Donatella stabbed him in the heart. In response, Jacks tosses his dagger through the gaps in the cage telling her to do her worst before breaking open the lock. Oh no… Is Jacks going to bite Evangeline? Is he going to become a vampire?!

After a rather heart-racing scene between the pair, Evangeline manages to keep Jacks from biting her by telling him he needs her to open the Valory Arch. But he doesn’t release her. He just holds her tighter. That is, until they’re interrupted by the sun rising, meaning (thank the Fates), that they both survived the night. Jacks wraps her in her cloak and stalks off, leaving his dagger behind. When Evangeline flags to him that he’s left his knife, he tells her to leave it, but she pockets it anyway. On their way back to Valorfall, Jacks is suddenly overcome with tiredness (a side effect of the vampire venom) and Evangeline has to try and half-carry, half-guide him back. But things only get worse when Evangeline spies another poster bearing her name, only this one has the words: WANTED and MURDER on it. Oh no! What’s going to happen to Evangeline now?

At that moment, however, Evangeline has bigger problems: getting she and Jacks to safety without being seen. As they move further into the town, Evangeline hears the sound of a bell ringing and it soon leads her to a black door with a GO AWAY sign on it. Managing to get it open using Jacks’s dagger, Evangeline carries him up the stairs. Before he falls asleep, Jacks tells her how it’s not luck that she’s there: he asked Poison to save her and arranged for her to come to Nocte Neverending. Oh, Jacks! We knew you were lovely really!

A little while later, Evangeline stumbles across a copy of that day’s Daily Rumour with the news that Prince Tiberius is engaged to Marisol! This confirms it, I knew Marisol was trouble! And, more worryingly, there is concern as Prince Apollo’s body is allegedly missing.

While recalling every action and comment Marisol has made, Evangeline feels Jacks’s heart beating. I can’t be the only one left thinking: what does THAT mean?! Not only that, but as she glances through the things in the place, she realises she is in Jacks’s home. No wonder the bell had been ringing so excitedly!

While Jacks sleeps, Evangeline wanders through his things, beginning to understand more and more about him. When she finds several copies of her favourite ballad, The Archer and the Fox, her heart warms. But when she tries to read the ending, the books stop her at every turn, except the last one. Only that doesn’t turn out to be a copy of the book at all but a spell book—the same one LaLa and Jacks warned her about and the same one she believes Marisol to own. Rifling through the recipes, she finds the one to make someone fall in love with you, which also highlights malefic oil as a requirement. Hmmm… where have we heard that before? When the potion is done, Evangeline heads to Wolf Hall (leaving a note for Jacks as to her whereabouts) with the intention of finding Apollo’s killer and clearing her name.

Sneaking into Wolf Hall and using her blood to undo the locks, Evangeline manages to place a her potion in Tiberius’s rooms alongside his other drinks. But when she leaves, she finds herself face-to-face with Marisol! Much to our and Evangeline’s confusion, Marisol helps hide Evangeline away before she’s caught by Tiberius’s guards. And when Evangeline accuses her of putting spells on Luc and Tiberius, Marisol looks devastated. Oh no… did we have it all wrong about Marisol?!

Confessing to what happened with Luc, we learn that Marisol didn’t in fact put a spell on Tiberius much to our surprise, and that she feels awful for what happened and how lovely Evangeline was to her. Until Evangeline tells her why she was turned to stone: because she called on the Prince of Hearts for help to save Luc. Overcome with anger, Marisol turns on her, calling the guards on Evangeline. When they arrive Marisol tells them that Evangeline has confessed to murdering Prince Apollo.

Carted off to Tiberius’s chambers for questioning, Evangeline learns about Tiberius’s motivations for accusing her of Apollo’s murder: he, like the Fortuna Matriarch, believes Evangeline is the prophecy key to unlocking the Valory Arch and as a member of a secret society meant to ensure the arch never opens, Tiberius must kill her. While he speaks, Tiberius drinks the potion Evangeline left for him and when she begs him to let one of his guards kill her instead (claiming Apollo would not want his own brother to kill his wife), he’s unable to give the order to the guard as one of the side effects of the serum Evangeline concocted is the inability to lie. Ha! Take that Tiberius! Not only that, but Tiberius reveals exactly who murdered his brother: he did! Tiberius confesses that he intended to kill Evangeline but accidentally killed his brother instead. And when Marisol bursts into the room, Tiberius tells the guards that his last request is never to see Marisol’s face again before being taken away.

Turning from fugitive back to princess, Evangeline’s innocence is soon restored. But realising Jacks hasn’t returned to Wolf Hall, Evangeline attempts to go and see if he’s awoken when she’s told a young man is waiting for her. Descending the stairs to meet him, Evangeline is intercepted by one of the guards who takes her below the castle. The guard reveals that they have Prince Apollo’s body as he’s still alive but he’s in a paused state. Trying to bring him back, Evangeline kisses his cheek but to no avail. And the more she thinks about what happened, the more she begins to question how Apollo ended up like this. In his confession, Tiberius had said that the poison shouldn’t have worked on Apollo as it was only meant to effect women so had it been her kiss that had made him like this? Well, not just her kiss, but Jacks’s blood? Had Jacks wanted Apollo in this state so she could live up to the prophecy and give up her blood willingly to open the arch? No… not Jacks… surely?

Determined not to let Jacks win, Evangeline vows to figure out a way to lift the curse on Apollo without opening the arch. But, as we find out in the final chapter of the book, the arch is already stirring…

Wow! What an ending! I love love LOVED Once Upon A Broken Heart, though excuse me while I pine for Book 2!

Thank you all so much for joining me in this readalong! I hope you’ve enjoyed it as much as I have, and do be sure to share your photos on Instagram to enter the readalong giveaway and to celebrate reaching the end!

In the meantime, have a wonderful weekend! 🙂

30 thoughts on “Once Upon A Broken Heart Readalong Day 5!”