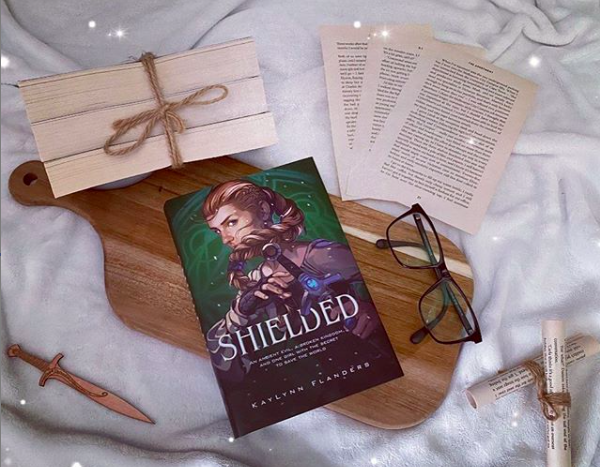 Please be warned, the following will include spoilers for Shielded Chapters 1-18! Read only if you’ve finished those chapters!

I don’t think that Jenna thought she’d be spending her time in the palace cleaning pots with Yesilia but I guess it’ll help her gain her trust?

Ooo Enzo’s sisters have come to take a look at her as it seems she’s the talk of the palace!

I’m so sad for Jenna having lost all of her family and now being in a place so unfamiliar to her but I’m glad Yesilia is being nice to her at least!

Jennesara, needing to see something other than the four walls or Yesilia’s rooms make her way out of the palace in the early morning and stumbles upon the practice ring. She must feel more like herself being able to practice stances and things that are so familiar to her!

Ahh Enzo has arrived and wants to spar!

Whoops Jenna accidentally just let slip that her father had a guard! That could have definitely given her away!

Whaaat Yesilia and others in Turia have magic!! Surely Jenna will be able to learn from them, figure out her tethers and what she can do!

It seems that helping Yesilia was the best thing for her as her task for today is to find books in the library, the exact place she wanted into the palace for!

Oh wow! They weren’t wrong in saying that Turia had the best library for books on magic! There’s so much information for her here! Jenna learns that there were three original mages and an apprentice and I think we’ve already met them all in those in-between chapters!

Ohhh so the shadow men are echoes of Graymere’s magic who can use some of his magic! Their poisoned swords only affect people with magic though which explains why Luc wasn’t effected but Jenna will need to hope nobody else finds that out! And anyone who touches the sword would become a shadow Mage ? that could’ve happened to Enzo!

I feel like if things had been different, Jenna and Chiara would have been good friends. They both seem to have gone through the same things and both feel like they can’t be who they really want to be!

Omg they want Jenna to be Chiara’s guard at the ball, this should be good! I’m excited that she gets to go to the ball but is anyone else sad at the prospect of Enzo choosing someone else as his betrothed?

Well that was a very strange interaction with the ambassador! Something feels off here?!

Enzo seems mad that Jenna came to the ball but she was just doing as she was asked!

Ahh the man that Chiara had danced with wanted to get her alone to attack her! But what was his motive! I’m glad Jenna managed to get there in time but something seems off, she wasn’t her usual self and even forgot to hide her hair! Did Enzo see it?

Omg someone poisoned her water! It must be someone with easy access to her rooms and knows about her daily routine maybe? Could it be because she’s Halendian?

The King just officially made Jennesara Chiara’s personal guard but I wonder how they’d feel if they knew the ruler of Halendi was now in their guard! It’s kind of amazing that’s she’s managed to infiltrate so well!

Ohhh so are the mages trying to find their artefacts that Kai kept when he banished them all?

I’m glad they’re working together to try and figure this out but I so wish Jenna could tell Enzo who she really is ?

Omg the image of Luc and Enzo racing into Chiara’s room to see if they are okay has me in stitches!

It’s such a good idea to teach Chiara some defence as well!

Jenna is such a qweeen being able to throw Enzo about like that! But ooft he distracted her and got one over on her! There are definitely some sparks flying here and I, for one, am loooving it!

Oh no Enzo and his parents are leaving! He said they’re taking most of the guard but will the girls be safe at home? Ahh I wish she would just tell him who she is!

Ahhhh her father’s medallion is one part of the key and the second part in somewhere in Turia! Do we think Enzo would know what and where it could be?

Woow so much happened today and I am loving it!
Tomorrow is the last day of the readalong so I want to hear what all of you think is going to happen! Let me know in the comments and I’ll see you tomorrow to find out!