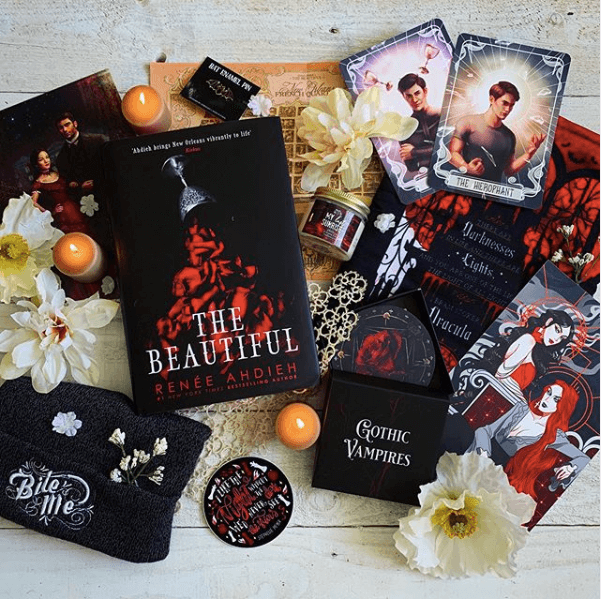 Hello again and welcome to day 4!

How are we all enjoying the book so far? Any favourite bits or quotes?

Please be warned, the following will include spoilers for The Beautiful by Renée Ahdieh pages 0-353! Read only if you’ve finished those pages!

That still didn’t stop them from telling Celine she was going to have to find different lodgings as it is no longer safe for her to stay at the convent.

Where will she go?

Celine decides she can’t wait until the morning to leave, she believes she must get as far away from her friends as possible to keep them from danger and so runs away. She doesn’t get very far before bumping into Detective Grimaldi. I don’t know how I feel about him! One minute he’s all nice to Celine and the next he’s being very aggressive! Thankfully Odette shows up (word really does travel fast!) and offers to take her wherever she would like to go.

She’s obviously going to stay! She can’t leave with the killer still on the hunt for her, potentially putting her friends in even more danger!

Celine’s plan involves using her as bait, which, even though it may be dangerous, is not a bad plan! This way they’ll have some control over the situation! While discussing what to do with the creature, Celine suspects that Odette, and the Court of Lions, knows more about the creature than she is letting on.

Even though Grimaldi did not agree to the plan, they are going ahead with it anyway and plan for it to take place the night of the masquerade ball!!! I’m so excited for that!

The suite at the Dumaine sounds incredible and I would definitely like to stay there!

Oooo so the suite belongs to Sébastien’s uncle and this is all mysterious-vampire-man’s (which he will now on be referred to as) master plan to get Sébastien’s uncle to return to New York? I’m intrigued as to what has happened in the past to cause all this!

So the vampires kill their own if they don’t follow their rules and this is what happened to Marin, a vampire that mysterious-vampire-man loved.

Omg no way did Bastien just point blank refuse to meet Celine! He definitely knows how much that would annoy her and that it will in no way stop her from going to see him if she wants! But now we get to go to a party!!

The entire Court of the Lions is in attendance at the party! Some more appropriately dressed for the party than others…I love that many people have simply not even bothered to read the play before choosing an outfit and so are not resembling any of the characters at all! Shows that the people are there not for the theme but just for an excuse for debauchery.

Oh nooo! It’s such a shame that Celine can’t just tell Pippa what is going! This is really going to hurt their friendship but it’s the only way to keep her safe!

Bastien follows Celine as she runs towards the maze and Celine finally confronts him about the court of the lions! He manages to tell her of their abilities without really revealing much and he admits he is fully human…

Oh no! Who is approaching them??

Ah it’s just some young ladies looking for the beautiful Sébastien, of course.

What is Sébastien going to do? Whatever it is can’t be good for Celine!

Wow, I can’t believe how much magic is surrounding Celine at the Dumaine and keeping her safe without her even knowing.

I love that Bastien is trying to warn Celine and potentially scare her into staying away and she still gives him into trouble for interrupting her! She’s a force to be reckoned with and its great.

They’re both so bad for each other but you just knew they were gonna get together!

Just as things were getting steamy the moment is ruined but omg what! I did not expect one of Bastien’s people to be killed and I don’t think Bastien expected it either! How did it happen in such a secure place?! We had literally just learned about all the magic protections to stop intruders but somehow, someone got past them!

Does anyone have any idea what the letters might mean? It must be some sort of message but I have no idea what it could be.

Michael got his wish and Celine has been locked in his office for her protection but Bastien is going to try and break her out.

Omg I love Michaels Nonna! She’s so wholesome and definitely trying to set up Celine and Michael! I do feel for Michael though as Celine is kind of giving him false hope but I also don’t know if I 100% trust him so I’m not sure what to feel!

Tomorrow is the last day of the readalong and I’m so excited to find out if the big plan at the masquerade ball works out and we’ll finally know who the killer is…hopefully!! But before we find out, I want to hear all your theories! Lets chat in the comments!

30 thoughts on “The Beautiful Readalong: Day 4”