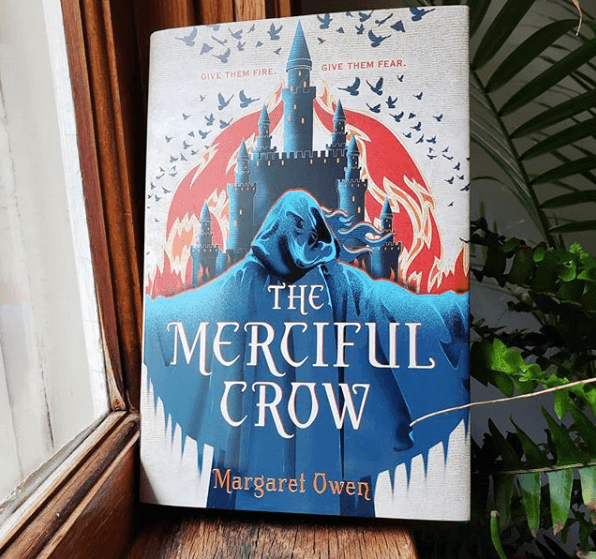 Its day 1 of our “The Merciful Crow” readalong! It’s really nice to see so many people who have participated before and to any of you who are joining for the first time, welcome! I really hope you enjoy this readalong!

I’ve heard this is a fast paced read with really intriguing and endearing characters so I’m really excited to dive straight in!

We’re starting the readalong with chapters 1-5 inclusive so get cosy and lets get some reading done!

Please be warned, the following will include spoilers for chapters 1-5 of The Merciful Crow by Margaret Own. Read only if you’ve finished those chapters!

We learn straight away that a plague has broken out and that Fie, Pa and Hangdog are there to dispose of the bodies of the latest victims.

Fie thinks that something has gone wrong as Pa is taking longer than usual but soon enough he emerges and Fie and Hangdog enter to remove their bodies.

Their every move is being watched by people from higher castes and so they must be careful not to aggravate them.

Eventually it is time to take the bodies from the palace but as they reach the gates, Fie notices that it is the queen who awaits them to give them their payment and she is alone and it is then that Fie realises that the crown Prince is under the sheets!

Wow this is already off to an interesting start!

The Queen, standing with her steward, only holds one thing to offer them for their services. A tabby cat. But this is not the worth of royalty and so Fie and her fellow Crows do the Money Dance in order to scare them into giving them more. Once they have finished, Pa gestures for Fie to approach the Queen and demand a more worthy payment. Fie demands the teeth.

After a bit of negotiating, she gets the teeth and just before leaving she grabs the cat as well!

I love her gusto but she’s lucky the queen didn’t retaliate at that!

Omg what the Prince is still alive!! If you had read the blurb you would already know this but I like going into books blind so I had no idea! Why would they pretend he was dead?? That would be why Pa covered the bodies himself but what is going on? The way he just sat up though!

I love that Fie’s immediate reaction was to punch him but luckily she punched his guard and not the Prince!

Rhusana wants the Prince dead and has attempted to kill him multiple times and so he had to escape the palace. I don’t know where he plans to go though!

The Prince and Tavin need their assistance in getting to Prince Jasimir’s allies where he will be protected and they will be able to enact their plan to overthrow Rhusana. But once again, Fie believes they should get more for what they are giving and does the second Money Dance of the day!

If they succeed in getting Jasimir to his allies, the Crows will be protected forever but I’m guessing there will be some difficulties in them getting there and I’m curious to see how their deal will be affected!

They set about preparing a fire to pretend to burn the bodies but they don’t need any flint to set the fire as Fie can use the teeth she has gained to set it alight! I love the fact that she can steal any of the Birthrights from bones of the higher castes!

There’s already a spanner in their plan as they’re not going to get there as fast as they thought! They need to make a detour to answer a plague beacon!

It must be quite risky to do a job with the lordlings in tow as that definitely runs the risk of someone catching them!

Fie is to inherit the deal if it is to go bad and I have a feeling that it might…Pa definitely thinks that something is going to happen to him and prepares Fie to cut people’s throats and give them a merciful death if she has to.

Oh nooo the Oleander Gentry are coming for them! Could this be what injures or kills Pa and what will make Fie become the Chief??

And that’s us for day 1! So much has happened already! I already feel so invested in these characters and I’m really curious as to how this is going to go!

I’ll see you tomorrow for day 2!