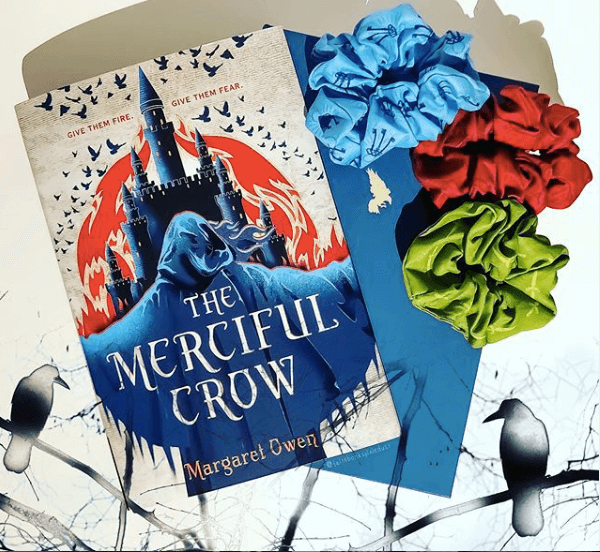 Welcome to the final day of our readalong of The Merciful Crow! That went by so fast!

Fie, Jasimir and Tavin have had such a rough journey and I’m really hoping for a happy ending for them but I’m not sure if that will happen!

But let’s get into the last few chapters! Today we’re reading chapters 20-the end!

Please be warned, the following will include spoilers for The Merciful Crow by Margaret Owen. Read only if you’ve finished the book!

Is there a possibility that Rhusana is somehow controlling the king? Is that why he didn’t watch as Jasimir and Tavin’s bodies were taken away? Its weird that we haven’t heard much about the King or what he is doing so I’m curious.

I’m glad they’ve been able to put their differences aside and might actually be able to achieve something if they manage to stop Rhusana.

Nooo the Vultures have caught up to them!

Fie uses everything she has and a Pheonix tooth to control the flames and create a path for them but she’s shot and can’t walk! They’re so close now, they have to make it!

Fie wants to sacrifice herself, cause a distraction to let Jasimir get to the gates of Trokovoi so he can become king and keep the oath but Jasimir doesn’t want to leave her.

Ahhh Draga saved them and chased off the Vultures but how did she know they were coming? Surely Tavin was the only one who knew their plan and they’d been tracking him, he couldn’t have got past them could he?

So Tavin managed to get the message to them but is still a hostage. Draga wants to ally with them but won’t give Fie the Hawk’s protection! I’m going to be so mad if she’s gone through all that to get Jasimir there and have to walk away with nothing for her people!

Fie decides she needs to go and save her kin and slips past the guards and begins looking for a way out but finds Jasimir in one of the great halls.

Did she just describe the difference in their eyes like Jasimir and Tavin’s? Could Draga be Tavin’s mother??

Omg they cut off Pa’s finger and sent it to them?!? They have to do something! They can’t let all of them die!

Ahhh I was right! Draga is Tavin’s mother!!

Surely Fie has a plan and isn’t actually going to give Jasimir up! Please say it ain’t so!

Yay! Using a Pheonix tooth to burn everything since Tavin can’t be harmed was such a good idea!

They’ve brought down the Vultures and stopped Tatterhelm and in the end she didn’t even give him a mercy killing! I’m so happy that, even with her lack of training, Fie managed to keep the oath and was really clever in defeating her enemies!

Pa officially made Fie the chief, even though she may think she doesn’t want it, she’s definitely the person to make the path for crows to become more respected! And Barf the cat is still alive!! I’m so happy! And Fie and Tavin are together again and happy to be!

Draga has agreed to give them the Hawks! Finally crows will have some protection and maybe will be treated better. But now Tavin can’t go with them.

They’ll be together again but first they both have things they need to deal with and Fie is the chief, she has merciful killings to deal.

And that’s the end of the book! So much just happened! I’m so excited to hear all your thoughts!

Thank you so, so much for reading with us! I hope these posts added a bit more excitement to the experience! Will you be participating in the next one?

Hope you enjoy your weekend!