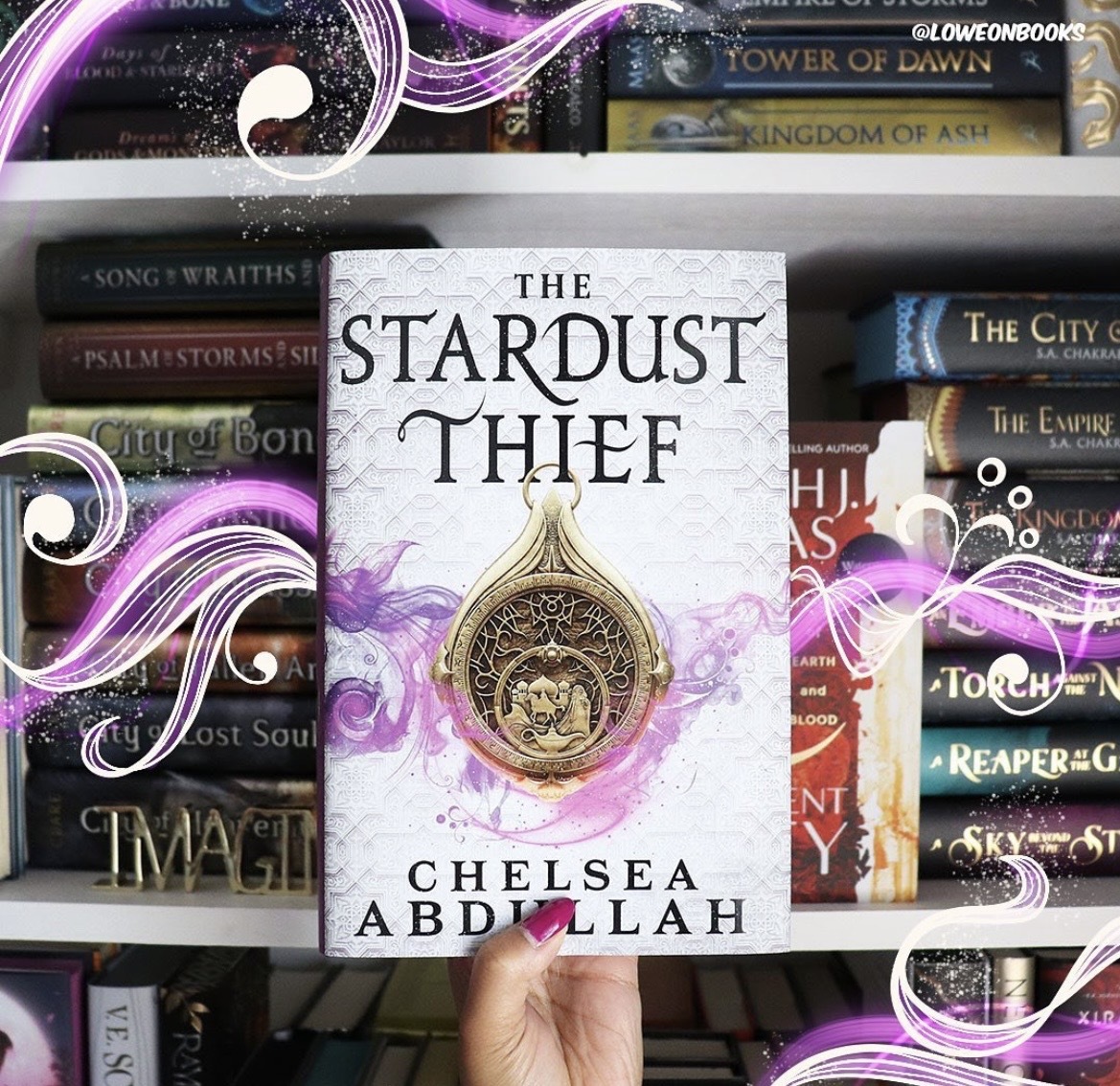 Welcome back to day 4 of our readalong of The Stardust Thief by Chelsea Abdullah! Yesterday’s section was… turbulent, to say the least. Let’s dive in and see what today’s section brings!

Today we’re reading from Chapter 42 to the end of Chapter 53. Get comfy and let’s get reading!

Please be warned, the following section will include spoilers for The Stardust Thief by Chelsea Abdullah, from chapters 42 to 53. Please only read on if you’ve finished this section!

We’ve joined Mazen as he’s sneaking around the corridors of the prison. He eventually comes across a chamber where Imad is questioning Aisha. She looks bad. She still won’t answer his questions, though.

Mazen decides he’s done being a coward and slips behind Aisha in his shadow form and cuts through her bindings, handing her the knife and telling her to run. Yassssssss, I’m so here for Mazen’s sudden strength! You go Mazen!

He wants Loulie to help him steal the shadow relic from Mazen, she puts up a fight but eventually Imad wins out. They torture her. A needle pin in her throat when she speaks and a knife to her ankles. Oh, Loulie.

Aisha and Mazen have found each other and Aisha is learning of Mazen’s shadow magic. He tells her he thinks it’s from the shadow jinn, maybe when Omar killed her soul latched onto Mazen’s shadow and turned it into a relic? Mazen assumes when Aisha says it suits him that she means because it lets him hide, and he’s a coward, but I don’t think that’s what she’s getting at. I don’t think he’s a coward either.

They’re joined by guards and Aisha quickly makes work of dispatching them, Mazen wants to know where they’re holding Loulie and they tell him she’s in their treasure chamber – torture chamber more like – and the assailant breaks free from Mazen’s grasp. Aisha has him covered and stabs one in the lungs, then kills the other and Mazen falls into her. She grabs his sword, her hands over his and kills the last of the guards. It doesn’t take long after that that Mazen has never been a killer, and killing for the first time now has left him… out of sorts. He calls himself a coward again and Aisha realises how hard the words she spoke hit Mazen. She recounts her words and says she shouldn’t have used it as a weapon, then she thanks Mazen and kind of opens up to him a bit. She tells him what happened between Imad and Omar… if I’m reading this right, it sounds like Omar ordered the hit on Loulie’s tribe and Qadir is the mysterious jinn who slaughtered the other thieves? The more I know of Omar, the more I dislike. As they’re talking, they hear a scream. I’m guessing it’s Loulie and Mazen thinks so too, Aisha thinks it’s a trap but Mazen is off, running, following the sound.

They find the treasure chamber, Loulie is in a bad way. When Mazen enters a fight with Imad, Imad’s knife suddenly changes and the hilt is not cutting Mazen…

Imad calls for the ghouls but they don’t respond. When Imad drops the blade, the blade speaks to Mazen. He recognises the voice, and the red eyes that have appeared on the surface… it’s Qadir. Loulie can’t speak, or walk. Mazen picks her up and together they almost manage to escape. Aisha urges Mazen to give over his shadow and she takes the dagger – Qadir – and shoots off.

When Mazen and Loulie escape, they’re not entirely sure where they are. Somewhere in the Sandsea. No doors, no passages, no escape. Then Mazen notices his shadow is back, surely that can only mean something bad has happened to Aisha?

Imad has found him, and he’s not alone. He has Aisha and he’s threatening to kill her. Mazen is very confused as to how the Queen of Dunes is here… I think we all are. Imad doesn’t waste any more time. Ordering the killer who has Aisha to end her life. And he does. Aisha’s gone. Qadir’s gone (kind of?). Loulie is severely injured and Mazen has no idea what to do. Then Mazen’s world is tilting and he’s sinking… is this the Queen of Dunes’ doing?

Loulie remembers her mother telling her to stay away from the Sandsea. It’s a rip in the world and she should never go near it. But now here she is, and then she’s falling. She’s falling into the sand too? Mazen is with her, but Aisha is nowhere to be found and Loulie is feeling the grief of losing her and Qadir deeply. Especially since what was left of Qadir, was with Aisha and now Aisha is gone, the knife with her.

Then a weird shadow being appears, like fire. It’s Qadir, the fiery apparition is Qadir? Then he’s pressing the blade into Loulie’s hand and tells Mazen where to find the compass. When Imad appears again (they really can’t shake this guy, can they?) he’s furious to see Qadir. Qadir urges Loulie to take her vengeance if she wants it. Imad killed her family, her tribe. She crawls to him, plunging her dagger into him again and again. The fire of the blade latching onto Imad until he’s nothing but charcoal.

Qadir smiles at her, his face fading, his red eyes faded to a mortal brown and tells her she did it, she avenged them. I’m sobbingggggg.

He’s gone, again. Mazen and Loulie are alone in their triumph, but it’s not what they expected.

Turns out, Aisha can’t die so easily. 👀The Queen of Dunes is making a deal with her. She will save Aisha IF she can inhabit her body. I’m not so sure that’s a good idea… Aisha accepts anyway. DO THESE PEOPLE NOT LEARN???

Alone in the Sandsea with a very quiet, hurt Loulie, Mazen sees something, someone, approaching them. Aisha has found them, and Mazen is CONFUSED.

Understandably, Mazen and Loulie want to know who she really is, how much power she actually holds in this deal and I’m guessing Aisha herself doesn’t really know, but she’s adamant that she’d never succumb to a jinn and she is herself. Mazen picks up on the fact that from the way she speaks of Qadir, it sounds like she knew him way before they found her relic. She says it’s not her story to tell, buuut I’m inclined to say it is, since Qadir can’t tell it? Loulie deserves to know. Aisha randomly decides it’s time to eat and takes Mazen with her to hunt, since Loulie can’t exactly go. She also just drops in casually that she can summon and dismiss the ghouls as she pleases, a handy power to have, buuut I still don’t trust Aisha right now.

As soon as Loulie’s alone, she reaches for the dagger and tries to speak to Qadir, but it looks like he’s gone. She eventually cries herself to sleep, and after a nightmare about Imad, she wakes to someone telling her she’s dreaming. A man sits before her, a man that looks an awwwwful lot like Qadir… because it is. He tells her he was never dead, only incapacitated. The trap, the iron, the swords, they injured him but were not enough to kill him. It took time for him to re-form but he did it and he found Loulie.

When Aisha and Mazen return, Qadir tells them the story of the seven jinn kings. A collective of jinn so powerful they were given their own name: Ifrit. It sounds like Qadir is The Inferno. One of the jinn kings, and the jinn who inhabits Aisha is The Resurrectionist. A long time ago they allowed humans into their city. As soon as they found out about the power the ifrit held, they came after them with iron swords and spears. Qadir was one of the ifrit who ran. For that, he was punished. That is how Qadir got his markings. For running from the humans who were trying to kill him to possess his blood and magic?

Qadir apologises from keeping this all from her, his power, his history. I don’t think Loulie can be angry at him for this though, he lied, but like he said he just wanted to be Qadir to her. He was made to believe he was a criminal and a coward for escaping near death, for escaping humans that wanted to kill him once they found out about his true power. I can’t blame him for being wary of sharing that again.

The fact Qadir went to such lengths to protect Loulie’s dagger, and his appreciation in turn for her protecting his shows how much he truly cares for Loulie. I might be shedding a lil tear right now. I’m a ball of emotion.

Mazen is off on another hunting trip with Aisha. He takes his chance to ask a bit about the Queen of Dunes (sorry, Resurrectionist) and she tells him what it means. When they return, Loulie is somewhat healed and they walk ON FOOT for two days to reach the next town on their way to finding the lamp (they have more will and determination than I ever will, I’d have given up ages ago).

Loulie and Mazen talk and I think Mazen is finally beginning to see who his brother really is. His brother ordered the hit that killed her tribe.

Mazen decides while they’re in the city, he’ll go by Yousef, in the same way that Loulie goes by Layla. In his lizard form, Qadir sits on Mazen’s shoulder and they woo a crowd. Yousef the storyteller spins tales of a jinn, the King of Fire and Loulie weaves between the crowd to get coin and treasures. They make a good team!

Next, he tells his mother’s story. Shafia was asked to intervene in helping to stop the sultan’s killing spree of wives. She vowed to speak to him, and went and offered herself as his wife. He asks why she offers herself and she asks to tell him a tale in full before he takes her life. He becomes enamoured with her, and her stories. After a year, the sultan still feels he was tricked and asks if she has a final wish before death. She tells him a story and he cries. He regrets the violent path he chose to protect himself and rather than killing her, he allows her to live, but she still died eventually. Loulie promises to come back with Mazen the next day and work as his manager whilst he tells stories. When he wakes in the morning, she’s gone and Loulie has asked Aisha to take his place. She’s a little more frightening to the crowd but she still does a good job. But an hour in a child enters the market screaming at the top of his lungs. He’s shot with an arrow and from the wound pours silver blood. A child jinn. Then in walks his killer… and Aisha knows him. His name is Tawil and he thinks he has much to discuss with Aisha… Ominous…

I’m so nervous to see what will happen in tomorrow’s final section.

See you then, fairies!