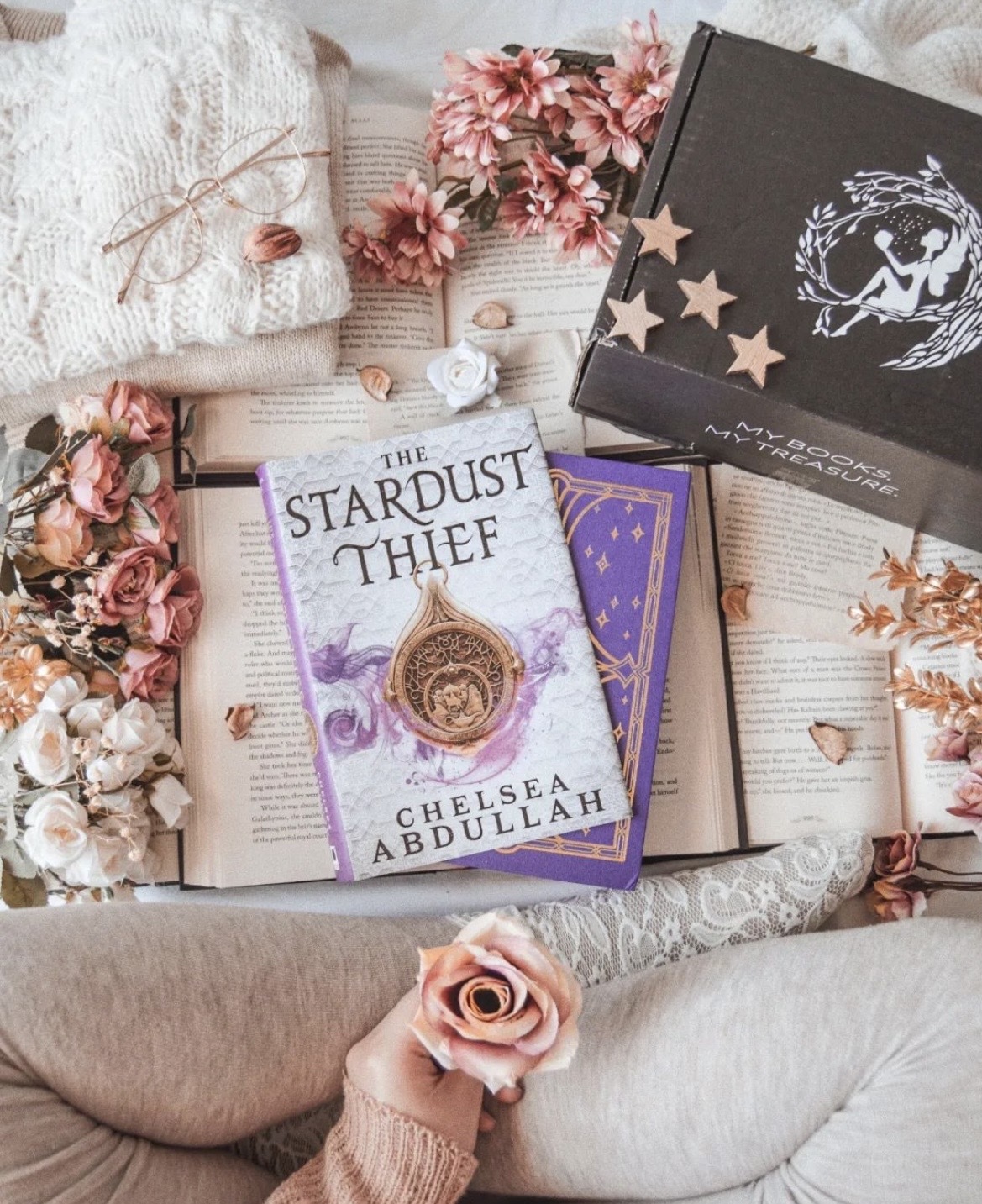 It’s the fifth and last day of our readalong of The Stardust Thief by Chelsea Abdullah. I am so nervous to know how this ends!

Today we’re reading from Chapter 54 to the end of the book.

Loulie and Qadir are currently hiking, just what you need after a double ankle injury. They’re lead by the compass to a relic underwater. She dives in and thinks she’s grabbed the relic, but whatever she’s really grabbed begins to pull her down. Milky-white eyes and a mouth of sharp teeth, scaled flesh. What on earth is this?!

Then she’s being pulled up. Qadir pulls her out and tells her he hadn’t realised there was anything in the water. That’s not very bodyguard of you, Qadir. It’s a dendan, fuelled with jinn blood. Just as Loulie thinks she failed to grab the relic, Qadir holds it up. Qadir finally gets Loulie to open up and realises she’s not angry at him, she’s angry at herself. She feels weak.

Qadir, in turn, opens up and tells Loulie he feels like a coward. He ran from danger, he hid and he didn’t tell Loulie who he really was because of his own fears. Especially after seeing Loulie’s reaction to the Resurrectionists power, Qadir was scared if Loulie found out he harnesses the same power that she would shun him.

Qadir assures Loulie that they’re a team. She doesn’t just rely on him, but he also relies on her. He also apologises for what happened to her family, he clearly feels somewhat responsible. I’m glad that Loulie tells him it’s not his fault.

Qadir hands her another jinn coin, and she quietly checks to see if it’s the truth that Qadir wants to stay with her, and it is. Maybe now she can stop feeling like a burden!

I absolutely love that Aisha has rewarded Mazen for spying on hers and Tawil’s conversation by getting him out of the way so Mazen can steal some of his relics!

Loulie dons her merchants robes and they sell off the relics they’ve collected (and stolen) for a small fortune. Loulie celebrates by getting drunk! Qadir, looks on disapprovingly and passes up Loulie’s offer to dance. Mazen doesn’t though. They dance together aaaand there’s definitely some romance here? Am I wrong? They’re definitely flirting, right?

Dayummm, definitely flirting. Loulie’s mind starts to drift off to think about how her lips would feel on his neck…. And then she runs away, into the crowd. Her guilt finally tells us why she would never accept Ahmed’s proposal. He’s a jinn killer, he kills jinn like Qadir. Not only that, Loulie is terrified of commitment and putting her trust in someone. I don’t know about you, fairies, but I think Mazen is a very good guy and I would trust him with my life.

Mazen is left to wonder if he was wrong, if Loulie wasn’t beginning to enjoy being around him in the same way he enjoyed being around her.

Qadir and Aisha confirm it has to be Rijah, the Shapeshifter, who is stuck in the lamp. If they manage to find the lamp and let Rijah out, would they be happy or annoyed to see Qadir and the Resurrectionist? I still don’t feel good about this!

Loulie approaches Mazen, and after playing with his mind a bit, confirms that she knows now that he is nothing like Omar. He’s honest.

I’m starting to think Aisha is regretting her deal. She’s starting to get memories that don’t belong to her. The next day Mazen asks if she has a name, because the Resurrectionist is, a tad long. She’s adamant that she’s Aisha, Qadir says she used to be Amina. I think it’s starting to get to Aisha that she’s not, well, herself anymore.

She doesn’t speak again until she excuses herself to go and fetch supplies. In the town, Mazen starts to hear things about Madinne, someone being imprisoned by their father, but not enough to find out what’s happened in Madinne. Until he passes a poster on the wall. It’s a wanted poster, with his name, his face, wanted for murder of the sultan.

Does this mean what I think it means???

Loulie catches up with him and, well, she’s as shocked as any of us. To make matters worse. Aisha has gone. Not just for supplies, but actually gone.

Mazen was spotted by a woman from the town and mercenaries appear, Mazen tells Loulie to just let them have her but she tells him to run for the horses. They get away, just about. My god, I’m on edge right now!

Qadir catches up with them and he has news. No news of Hakim, but of another. Ahmed bin Walid was killed in the coup.

Loulie is even more hell bent on revenge now, on finding the lamp and destroying Omar, and Mazen is going with them.

Aisha finds Omar… Did she know of his plan all along? It sounds like it since she’s asking if he’s sultan now. Omar wants her relic, the collar. He still wants the lamp too. So now we have Qadir, Loulie and Mazen after the lamp from one direction, and Aisha, Omar and Tawil from another. Is it too much to hope Qadir, Loulie and Mazen will get there first and just not bump into Aisha and Omar?

Something in the Sandsea has affected Qadir. He snaps at Loulie not to touch him and won’t stop moving. Loulie and Mazen follow the compass until Loulie eventually passes the compass off to Mazen and tells him she’s going to look for Qadir. In a room of treasure, Mazen uses the compass to find the lamp, but it’s nothing special, it’s just a normal lamp.

Loulie uses the jinn coin to determine that while Qadir is not possessed, he is being influenced by magic. When she finds Qadir he’s being shot at with iron arrows. Aisha and her gang have found them. Then Loulie realises if Aisha and Tawil are here, Omar must be too.

We learn part of the reason Omar killed the sultan, was because he planned on naming Mazen his successor, skipping Omar altogether. Omar’s blood is black. It was never a side effect of the relic, his blood is just black. What is he??? Omar is showing Mazen memories, of his father telling him he’s got the blood of a sinner and he’s a blight on the world. He tells Omar he has to prove he’s not like her and kill jinn, because they’re monsters. Omar asked if he’s a monster and his father tells him it’s yet to be determined.

It seems Aisha’s deal is not all bad. Though she suspected it herself, the Resurrectionist confirms his earring is ifrit magic. It’s a relic.

When Omar presses his hand to the lamp. The Shapeshifter, Rijah, appears. Omar commands Rijah to kill Qadir. When Loulie intervenes, Tawil tells her to give up, that the Shapeshifter is sure to give them a good show. It’s then that Aisha realises he’s only known by the Shapeshifter in the jinn stories. She takes her opportunity and slashes her sword at Tawil. The blood that pours from the wound is silver. He’s a jinn. She doesn’t let him explain, just stabs him in the throat and whirls on Omar. He just says he was going to tell her when all of this was over, more than HALF of the forty thieves are jinn. Aisha vows to herself that she will kill Omar, and she always keeps her promises.

So Omar’s mother was Aliyah the Forgotten, an ifrit. As Omar tries to take the king’s relic frm Aisha, Mazen grabs the lamp, cuts his palm open and swears Rijah to HIM. Yaaaas Mazen! Qadir assures Rijah that Mazen is a friend and points him toward his real enemy, Omar. Then Omar – or Aliyah – is showing Mazen another memory. His mother was not killed by some random jinn, it was Omar all along. Then he’s shown the memory of Omar killing their father, in Mazen’s body.

The fighting has progressed even further while Mazen was trapped in Aliyah’s illusions/memories. Mazen knows he’s not a fighter, and the moment he’s seen he’ll be defeated. So he slips his shadow over his shoulders and goes to hunt for his brother.

Loulie has also worked out that Omar’s earring is a relic, it’s his mother. She takes her opportunity to rip it from his ear while she’s close enough. As he gives chase, vowing to kill Loulie, he suddenly begins to sink into the sand.

Then Rijah is above her in their rukh form and Qadir is sliding down their wing (what a cool image). Qadir tells her of his plan. They cannot stay here. If you can’t stay in your own world, escape to another. She quickly understands this was his plan the entire time. He promises to find her again.

Mazen and Loulie step onto Rijah’s wing and settle on their back. Aisha sees them, but turns and walks away. She doesn’t want to be saved.

In the jinn world, Rijah is frustrated with Loulie and Mazen’s slowness and tells them they were commanded by their KING (yes, KING) to watch over them but not to baby them.

Qadir… is the jinn king and Loulie and Mazen are in his world, waiting for him.

That ending! THAT ENDING!!! I can’t believe it. I feel like I should’ve seen that coming… but I did not.

Make sure you drop all of your thoughts in the comments. I hope you loved The Stardust Thief and enjoyed the readalong, as always thank you for joining us!