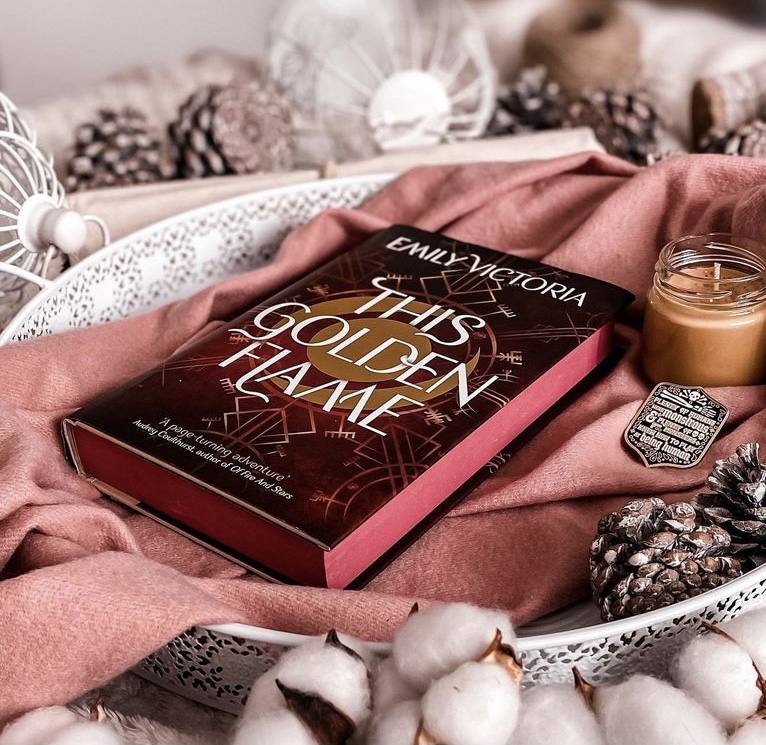 Welcome to day four of the readalong! I hope you’ve been enjoying this book as much as I have! What have been your favourite parts so far?

Only today and tomorrow left now, we’re almost at the finish line! I for one have been on the edge of my seat for most of this book and I expect it’s not going to slow down anytime soon! Who’s ready to jump back into the action?

Please be warned, the following will include spoilers for This Golden Flame by Emily Victoria chapters 1-32! Read only if you’ve finished those chapters!

Today’s section begins with Alex agreeing to let Rudy study his runes which Karis isn’t… immediately thrilled about. Thankfully she seems to come around when Rudy tells her that it was Matthias’ choice to be caught. Rudy is clearly heartbroken but he wants to continue fighting for the cause that Matthias believes in, it seems Karis can accept that at least?

Oh the pottery is very intriguing…perhaps automatons weren’t always used as weapons after all?

We have some answers folks! The Magistrate already has the Automaton Heart and that amount of script ink could be used to awaken the whole automaton army! No wonder he’s so desperately hunting Alix.

Okay we need to discuss this encounter with the Magistrate! He feels justified in his actions-of course! But doe he know who she is? It sure seems like it… He’s totally onto them right?! But why not arrest them there and then?

Oh my days! Matthias spent a whole year in the Magistrate’s Library?! Understandably Matthias was in bad shape when he did manage to escape. Trained by an old Scriptmaster who lost his eyesight as a young man and paired with Rudy he did whatever he could to hurt the Scriptorium.

Calantha it turns out was employed by the Magistrate to improve the design of his “obey” runes. She seems very regretful and determined to atone for her past mistakes, perhaps we can trust this woman? Cleary the Magistrate is waiting for her to slip up so he can see her in chains, he must have been watching her movements right?

Ooooh we have some more flirting between Dane and Zara! Dane seems to have found new purpose and Karis has been made softer by Alix, she now has people to protect! Anyone else loving the friendship blossoming between Karis and Zara?

It’s hard for Alix to return home, seeing it in disrepair and to be greeted with painful memories. Oh ouch.. he enters his father’s study to see many automatons with his face.  “Maybe all I am is the copy that worked.” 😢

Ah man, we learn that the magistrate wanted a key to unlock the Scrivolia to greater power and so Alix’s father created Alix to take the script ink away from them, this is Alix’s worse fear…. That he was made to only be a tool.

So that’s what happened! Alix locked the heart and in so doing kept it’s power from the Scriptorium for two centuries! However he still blames himself for his father’s death 😢

This whole section of this book can be summed up as ‘poor Alix’. He was sure by returning home he would find something to prove he’s more than just an automaton, only he didn’t.

Hold up he just awakened an automaton?!! Does this mean he could maybe control the other automatons?  And now Calantha goes ahead and practically sacrifices herself in order for Alix to retrieve his tome! I knew leaving it in that safe wasn’t the best idea! I guess this means they were correct to trust her!

Okay phew Dane got away but sadly not everyone did, including Calantha. This leaves Alix feeling guilt ridden and everyone generally feeling defeated. Surely they can’t be considering just running away? Not when they’ve come the far! But wait is there hope?

Yes come through Karis!  They can’t allow the magistrate to gain access to that Script ink and Alix Is ready to try and destroy the automaton heart! Let’s just hope he will remember how when the time comes…

“We save our people. We destroy the Heart. And we deal a blow to the Scriptorium they’ll never recover from.” YES ZARA

Oh no Alix you can’t ask Karis to do that?! Destroying his tome could kill him but he’d rather die than be controlled. That’s quite the favour to ask of anyone but here’s hoping it doesn’t come to that. 🤞

So as expected the Library is terrifying! And we discover that the magistrate is messing with script ink, twisting it into something new. They’ve found it, the Automaton Heart! But OH NO of course the Magistrate is there!! Ah shoot they played right into his hands, they have just casually given him what he needs- Alix.

He’s proposing a simple trade, Alix in exchange for Matthias! An impossible choice for Karis to make. She knew there would be a cost to pay for trying to stop the Magistrate but she wasn’t prepared for this, not for it to cost her brother’s life or Alix’s for that matter!

She writes a rune on the page and oooooh cliffhanger!!!

What a place to leave it for today huh? 😅

Things are heating up to the conclusion and I for one can’t wait to see how this ending will go down! Any theories as to what will happen? Please let me know all your thoughts!