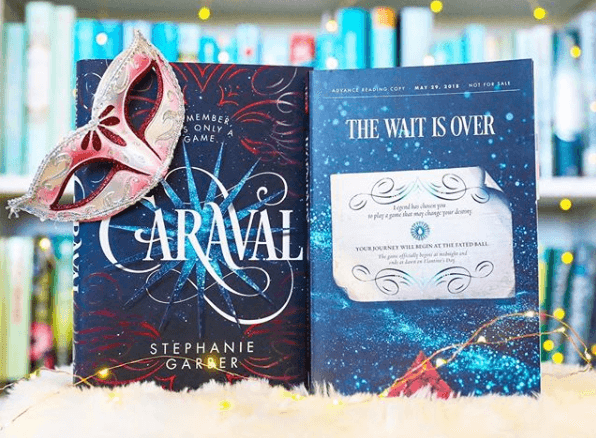 It’s day 5 of the ‘Caraval’ readalong! We’re almost at the end of ‘Caraval’ you guys. What a ride this has been. I have genuinely loved re-reading this book with you all.

Today we’re reading chapters 28 – 35, and stopping at the beginning of chapter 36.

Please be warned, the following will include spoilers for Caraval chapters 28-35 inclusively. Read only if you’ve finished those chapters!

We left off yesterday, as the mysterious man in the top hat reveals himself as Scarlett’s real fiance. Bet you guys didn’t see that one coming! And to make matters worse, we are picking up in Chapter 28, where Scarlett’s father finally finds and chases them! What I find interesting though, is that he appears more frightened than angry. Do you guys think Julian was right? Perhaps her father really is here to protect her.

They manage to escape her father in the pouring rain. Scarlett confronts Julian about his jealousy, and my heart really started thumping at this part guys. Garber knows how to build the angst.

Scarlett admits that she is no longer afraid of Julian’s secrets and they FINALLY share a kiss. Queue my heart, my legs, turning to jelly. This entire scene just made me swoooon!

Scarlett tells Julian that she thinks the fifth clue is the roses or is in the roses, and I mean…it’s a good guess, there’s roses everywhere in this story. It would be a great it’s been right in front of you the whole time moments.

On their way back to the Tavern, they are caught by Scarlett’s father, who does seem furious now, so I take back what I said in yesterday’s post. He probably wasn’t worried about Scarlett as he has the Count hold her back whilst he slices a knife across Julian’s cheek to teach him a lesson before telling him that Scarlett will sleep with the Count as an early wedding gift. Ahem, I don’t think that’s your place to arrange that, sir!

Julian leaves reluctantly as Scarlett and the Count make her way to her room where she remembers that she bought a protection potion. Did anyone else forget about that? I did. Whoops!

She retrieves it from the wardrobe – right after Julian casually tumbles out of it – and tosses it on the Count to keep away from her, giving her and Julian time to escape.

Julian and Scarlett share a moment. Be still my beating heart. And Scarlett starts to consider the phrase leap of faith. Julian tells her that his sister died by leaping from a balcony, not a window, and so they both decide to head to the balconies to try find Tella.

They manage to find a black hole in the carousel, that they hope will take them to Legend. Before Scarlett leaps in, Julian gives her a pocket watch, claiming that inside there are coordinates to a boat that will take here wherever she needs to go if the get separated or if things go wrong. Scarlett lands in water when she leaps in, letting the current take her wherever it flows, she ends up between two statues and finally meets the one and only, Legend. But is it really him? Who knows! That’s the beauty of Caraval!

I was genuinely a little scared of Legend here as he was a pretty unpredictable character and he seemed really, really mad at Scarlett.

Julian appears, yay! And Legend tells us that he has been working for him throughout the whole games. I remember not being too surprised by this the first time I read ‘Caraval‘. But, I remember thinking there was definitely more to his story that we still had to discover. Julian hasn’t exactly been an open book throughout the story so far, has he?

Julian tells Scarlett that Rosa wasn’t his sister, but just an unfortunate girl who fell helplessly in love and got too swept up in the games, and Legend admits that he’d hoped Scarlett would have fallen for Dante instead. I’d love to know who you guys would be more drawn to, Julian or Dante?

Legend finds the pocket watch that Julian gave to Scarlett before she leapt into the Carousel. The watch plays an apology from Julian which severely pisses off Legend. So much so, that he pulls out a knife and stabs Julian!

Scarlett begs him to fight for his life, reminding him that he promised he’d help her win the game and find Tella. He tells her he lied. Scarlett desperately tries to stop the bleeding as she tells him that she doesn’t care, she’ll forgive him if he lives, but it’s not enough. Julian dies in her arms. Queue me, sobbing.

When Scarlett looks up, she sees that Legend has vanished and in his place is an invitation to Tella’s funeral, or what will be her funeral, if Scarlett doesn’t save her in time.

Scarlett finally finds Tella in one of the many balcony rooms, and Tella is glad to see her because she is bored! I bet Scarlett would kill to have the luxury to be bored right about now!

Scarlett tries to convince Tella to leave, but she’s reluctant, claiming that Scarlett is too caught up in the game. Scarlett pulls out the invitation left to Tella’s funeral to prove to her sister that they are in immediate danger. However, the funeral invitation, is now completely changed into an invitation to a Caraval staff party.

Oh man, oh man, oh man. I forgot how stressful this book got towards the end. Don’t get me wrong, I am loooving being back in the world of Caraval, but I genuinely love these characters and hope that they make it out alive. But, now Julian and Dante have been killed. So we can only hope Scarlett succeeds in getting her sister out of Caraval safely.

We will be back tomorrow for the last day of the ‘Caraval‘ readalong and we’ll be reading chapters 36 – end.